Sweet Salty Spicy has been around for ages, and yet we choose to try it barely a week after our trip to Bangkok… It’s located at Rail Mall, and possibly occupies the 2 units that used to be Rocky’s Pizza. Because it’s part restaurant, part deli/grocery store, I figured it would be quite casual, but while it’s definitely not a dress-up-for place, it was a lot more chic than I expected.

The place is a collaboration of sorts, between Chef Christopher Millar of Poppi restaurant, and Victor Chia, who owns and runs the famous vegetable stall at Tekka Market, and who supplies all the fresh herbs and vegetables to the deli. 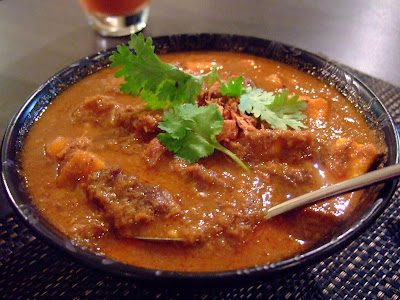 We passed on the pad thai for today, and instead ordered plain rice with a couple of dishes. The beef curry was similar to a rendang, but they use Angus beef so it was meltingly tender. It was also labelled one of the spicy dishes but it totally wasn’t spicy at all, not even for A. The only thing I didn't like about this was that the rempah (spice paste) wasn’t ground finely enough, so the gravy still had bits of herbs and spices in it, which made for a slightly unpleasant experience with the bits getting caught between your teeth or grazing your throat as you swallow. 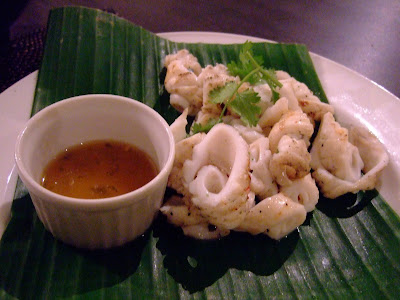 We ordered a grilled squid from the grill section of the menu, and this was excellent. The squid was tender, it had a wonderfully charred and smoky flavour, and went perfectly with the slightly tart dipping sauce. I’m definitely ordering more items from the grill menu if this is any indication of their standard. 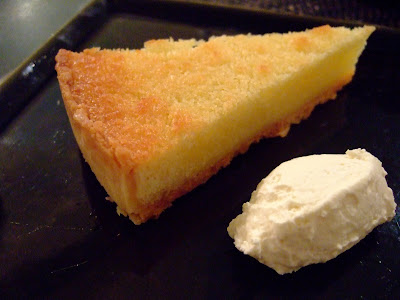 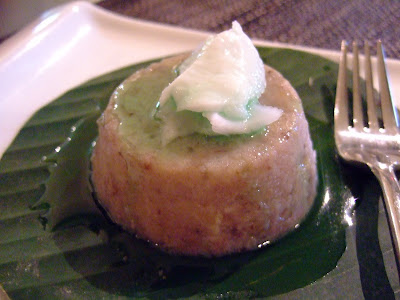 There are some local desserts here as well as a wide array of cakes. We were tempted by the giant Double Chocolate cake, but decided to be more traditional, and tried the Coconut Custard tart, and the steamed banana pudding. The banana pudding was a bit odd, and given that it took ages to arrive, I don't think it was worth the wait. I quite liked the tart, which tasted like a high-end version of a Bengawan Solo kueh, but given a choice I’ll probably forego desserts in future, in favour of other items from the main menu.

Service is a tad erratic, though. There are quite a lot of staff running around, but they all seemed to have very specific designated duties, because when we tried to get the attention of one of them, who seemed to be just chilling out talking to another waitress who was in charge of desserts, he simply gesticulated to another waiter then carried right on talking. Also, trying to find parking around Rail Mall is still a bit of a bitch, but this place is worth checking out. I just can’t believe that it’s taken us almost a year to finally try it out.

The food is pretty good but you don’t get a very large selection and the portions are smaller than I expected for the price.

I was impressed by the service when we arrived but things went downhill after we were served. Other than the woman who first served us and the guy I assume was the head waiter, the rest of the wait staff seemed more like bus boys pressed into service rather than anything. It’s a pity about the service because I like the ambience. I’d describe it as upscale casual without being chi-chi.

Overall, I’d only come back here since it’s the best “thai” place I’ve found in the area. It’s worth checking out if you live nearby but by no means does it warrant a special trip out. If I wanted cheap Thai, I’d head for Thai Express and if I wanted really good Thai, I’d head to A-roy Thai.