No Menu at Boon Tat Street is the latest of Osvaldo Forlino’s culinary undertakings. His first was Forlino at One Fullerton, where after it was apparent that his rustic home cooking was somewhat incongruous with the gilded decor and stuffy service, he went on to Osvaldo at Maxwell. He then parted amicably with his partner and set up No Menu, which he now runs with his entire family – his wife, mother, daughters and niece.

This post is actually a combination of two separate visits to the restaurant. Last Friday on our first visit, we tried their signature “no menu” – a 9-course degustation for $98, based on what the chef feels like cooking that day and what is available at the market. A week later we came with W and tried the a la carte/specials. We’ll take each in turn.

I felt vindicated after this meal. I recommended Osvaldo to A after a great work event there, but when we went there together the service and food were horrendous. This meal finally showed A what I was talking about. For the most part, the meal was excellent and just what we like – small portions and plenty of variety. 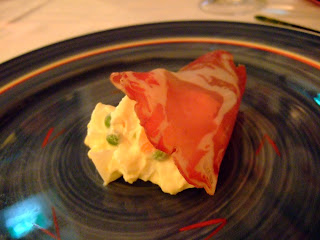 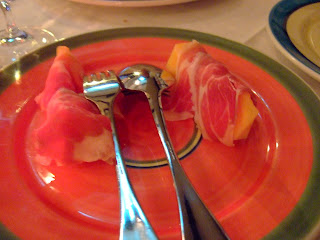 The first few bites were based on cured meats – a jamon-like ham on top of a Russian potato salad, and parma ham with melon. I much preferred the depth and complexity of the jamon, while A like the pungent saltiness of the parma ham. 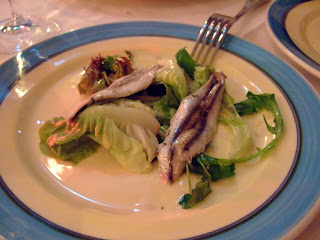 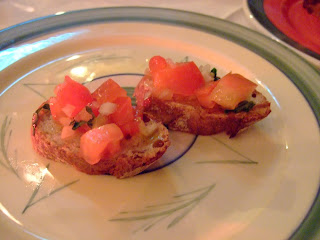 Next up was an anchovy salad, followed by tomato bruschetta. The anchovy was surprisingly more tart than savoury, but acted as a pleasant acidic break after the savoury hams, and likewise with the refreshing bruschetta. 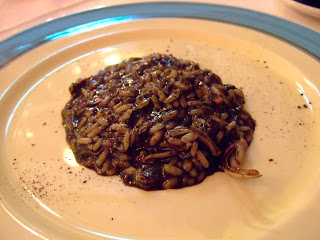 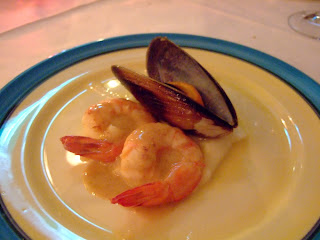 The great thing about the no menu is that you get a risotto course, which comes in the perfect size where risotto is concerned – just enough to satisfy and not enough to give diminishing returns. Tonight’s was a squid ink risotto with pieces of squid, which was very good. The seafood course was prawns and mussels in a Portofino sauce that tasted like the essence of the sea. Everything was very fresh and very tasty. 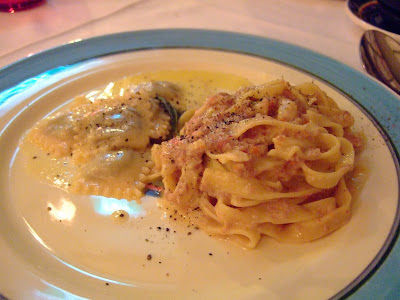 Next up was the pasta course, which was one of the highlights of the meal. It consisted of two pastas – a ravioli in sage and butter sauce, and fettucine with wild boar ragu. Both pastas were home made and were texturally fantastic, particularly the silky ravioli. Again, the portions were perfect and I like how the sauces weren’t creamy or too heavy. 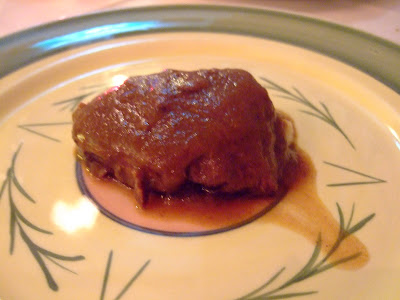 You only get one choice in the whole no menu – either meat or fish for your main course. We both went with meat, which may have been a mistake. It was quite an uninspiring braised meat dish, which left almost no impression on me. 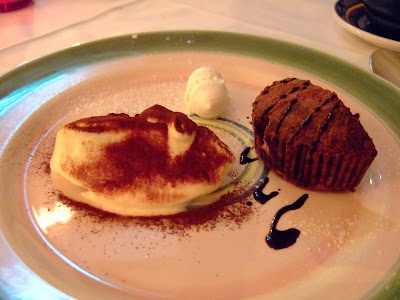 Finally, dessert was a duo of tiramisu and gianduja, which was pretty decent.

After this meal, we were really psyched to try their a la carte offerings, and their off-menu specials like they have at Valentino’s. So we dragged W there the following week for an early dinner (yes, they too have 2 sittings). 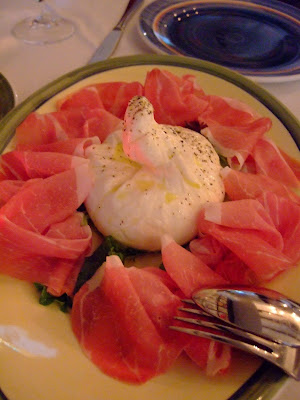 I almost always gravitate towards burrata if a restaurant has it on their menu, and I also inevitably compare it to the one at Valentino’s. The burrata here was pretty good – very creamy and oozy but somehow it lacked the richness and flavour of the one at Valentino. It’s served with parma ham, cherry tomatoes and salad, but at $50 I think this was pretty astronomically priced. I think the parma ham contributed considerably to the cost, which is ironic because I think the ham actually distracts from the taste of the cheese. 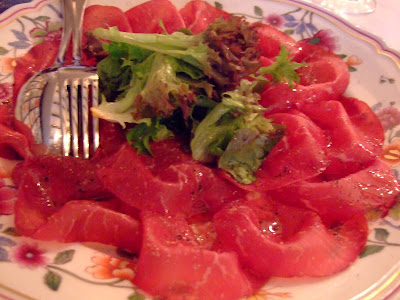 We also ordered the bresaola (Italian air dried beef), which was ok but came in such a huge portion that we were pretty salted out before our mains even arrived. W also commented that this should’ve been served with rocket salad and shaved parmesan, rather than a mixed salad. 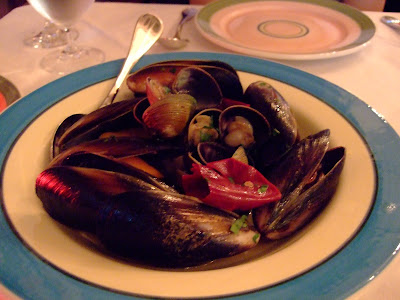 The white wine mussels and clams were good, with a kick ass white wine sauce. The shellfish arrived from New Zealand that afternoon so there’s no denying that they were really fresh. 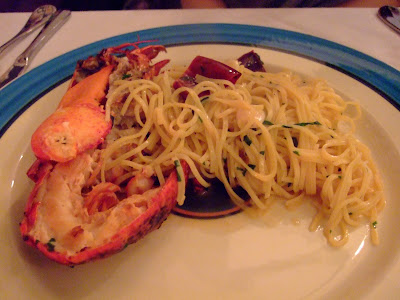 W had the lobster pasta but this was very disappointing. Instead of Valentino’s lobster pasta with pink sauce, where the sauce is the essence of lobster, this was prepared aglio olio style, so the pasta barely had any flavour of lobster at all. 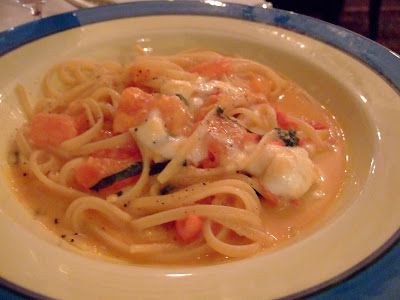 A ordered the linguine with burrata, but again this was quite disappointing, with the pasta in an overly watery sauce with small morsels of burrata that could’ve been any other cheese. 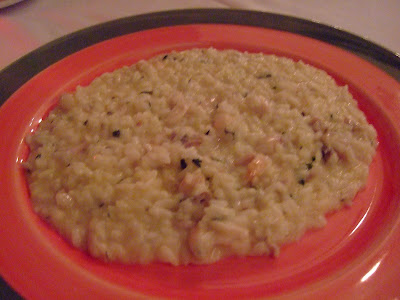 I ordered another of the daily specials, a frog’s leg risotto. The first few bites of this were really good, then the risotto curse struck because of the sheer size of the portion, and I found myself really struggling towards the end. Didn’t help that there were loads of frog leg bones in the risotto. 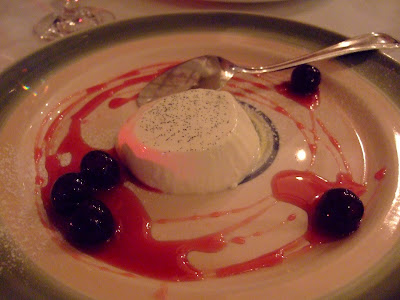 On a colleague’s recommendation we ordered the panna cotta to share, and I must say at least it ended the meal on a good note. The panna cotta was creamy but not overly rich, and very smooth and light.

After both visits, it was clear to us that the no menu is definitely the way to go here. If I wanted to order a la carte/specials, then I’d rather head to Valentino’s.

The $98 No Menu set was way better. You get to try more stuff and it really fills you up. The only thing I didn’t like was the main protein dish, and that’s only because I don’t like my meat braised.

The daily specials we had for our second visit were great, but very expensive. You could probably get a meal equally as good at Valentino’s for cheaper.

And the one regular ala carte dish was pretty disappointing.

Overall, service is great if you have the right server and definitely worth visiting at least once to have the No Menu option.