When A’s friend K suggested dinner here tonight, I was a bit apprehensive. On the one hand I wanted to give it a try, since we’ve tried both previous PS Cafes, but on the other hand I hadn’t heard very good things about the food. I guess that helped, because without any expectations we ended up being very pleasantly surprised with the food. 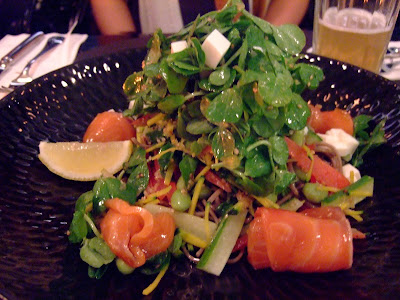 Unfortunately they have a “no photos of the food” policy, so the picture of the salad is the only one I managed to take. Called The Big Nihon, it’s a Japanese-inspired salad with soy-cured salmon sashimi, strips of cucumber, edamame beans, pea shoots and sesame dressing. This was very refreshing, and something I almost wouldn't mind having as a main course if I was feeling virtuous.

I had the steak sandwich, which was more like a burger, with slices of teriyaki-marinated steak, mixed greens and caramelized onions on a sesame seed bun. The meat was pretty tender, thanks to the fact that it was prepared medium rare as requested. I liked the fat chunky fries and the dip, though it wasn’t quite A’s thing because of the distinctive flavour of kaffir lime leaves.

A ordered the Moroccan Lamb which was served with couscous. I’m not one for Moroccan food generally, but the lamb was surprisingly good. Very very tender, and the harissa yogurt and the flavours of the couscous all blended very well together.

Save some room for the desserts here, because they’re massive and some are pretty good. The Chocolate Crunch Doorstop cake is like a giant Mars/Snickers bar, and frankly I can't handle this alone or even as a couple. It’s intense, really sweet and chockfull of nuts, but if you’re in a big group it's worth a try.

The Chocolate Blackout Cake, a multi-layer chocolate fudge cake, is much better, but this is nothing new to PS Cafe regulars because it's available at their other outlets too.

The steamed ginger pudding is light, fluffy and went perfectly with the earl grey creme anglaise, but unfortunately no one else liked ginger so I ended up eating most of it myself.

Unless you want a laugh, give the very phallic-looking Giant Coffee Eclair a miss. Because of the sheer size (about 10 inches long and 2 inches wide), the choux pastry turned out quite dry, thick and hard.

I like the high ceilings here, and be warned that it’s quite chilly inside. It was a tad worrying that the restaurant was almost empty on a Sunday night, but perhaps they do better business on Fridays, Saturdays and at lunchtime. The food here is certainly the best out of the 3 PS Cafes, but given the standard of the other two, that’s not that hard to achieve.

Our friend P ordered the Moroccan Lamb and found it a bit too lamb-ey but I really liked it. It’s like a really good and meaty giant piece of mutton satay.

That and the Chocolate Blackout were the only things that stood out to me.

Having said that, the food and service were a lot better than I expected. I wouldn’t mind coming back, but it’s not at the top of my list.

Finally, after almost a year (argh, time flies!), they finally conducted Joycelyn Shu’s cupcake Level 2 workshop. Unlike the previous class, which had very basic vanilla and chocolate cupcake recipes and focused heavily on marzipan decorating, this was the opposite. We were taught a basic buttery cupcake recipe, and variations based on different flavoured melted butters. 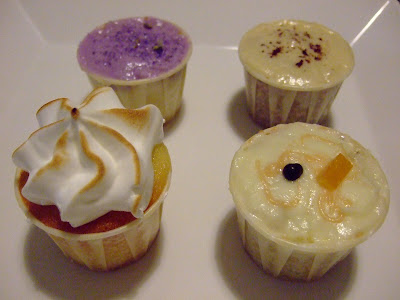 The four that we made in the class were (clockwise from top):

Because this base recipe uses a different technique, where melted butter is slowly emulsified into the egg, flour and cream mixture, rather than the typical creamed-butter-and-sugar technique, the result was a pretty dense but very moist cake, more suited to smaller bite sizes than full-on cupcake sized.

My favourite was the lemon. I tend to be a bit wary of lavender-flavoured foodstuffs in general, and the tea-flavoured ones were quite complex and sophisticated, definitely not for kids. I like that the recipe is just a base, and we can get creative with different flavour variations depending on what we infuse the melted butter with. I’m quite keen to make the lemon ones again (any excuse to use my blowtorch), and I want to try a coffee variation too.

After our last visit here which was a slight non-event because of A’s headache, we more than made up for it with another Valentino’s fix on Friday night. This time we went full-on with the appetizers, and just shared one lobster pasta between the two of us.

Because we were so enamoured with the twisted mozzarella the last time, we were initially pretty psyched to hear that it was available again. Kudos to one of the waiters though, who strongly advised us against ordering both the twisted mozzarella and the burrata starters, since they were too similar and would be too jelak. We ended up having a calamari, deep fried anchovies, and the burrata with cherry tomatoes. 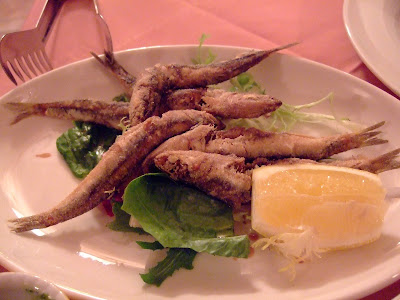 Because we’ve only ever had anchovies in their salted/oiled/tinned form, we wanted to try the deep fried fresh variety just for the heck of it. While they had a rather interesting taste, they were unfortunately quite bony and were somewhat similar to Japanese shisamo (pregnant fish). Worth a try, but I wouldn't order it again. 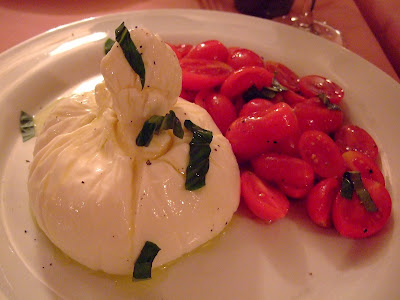 On the other hand, until we get sick of it, we’ll keep ordering the burrata as long as it’s available. If we thought the twisted mozzarella was good, this just blew it away. Burrata is a kind of Italian cheese whereby the outside is made with regular buffalo mozzarella, and it’s filled with a mixture of more pieces of buffalo mozzarella, cream and butter.

The result is an incredible combination of flavour, texture and ooziness. The outer mozzarella layer still has some bite to it, the inside is incredibly smooth, rich and creamy, and everything coupled with the sweet Italian cherry tomatoes was absolute heaven.

On a separate note, the Pasticceria next door has been revamped, and is now much snazzier and takes up 2 units. It’s been renamed Perla’s Pasticceria (giving a much deserved nod to Valentino’s sister Perla’s pastry skills), and connects to a very rustic, almost kitschy wine annex. Once you pop in, you’ll be hard pressed to resist the tiny little pastries on display. They’re pretty good, but nothing spectacular compared to her tiramisu and white chocolate Chantilly cake.

I was contacted by Andy and Debbie at Apex Group Asia, asking me if I was interested in reviewing a new instant ramen that they are in the process of importing into Singapore. They were nice enough to let me have a complimentary pack to sample, so I thought “Why not?” 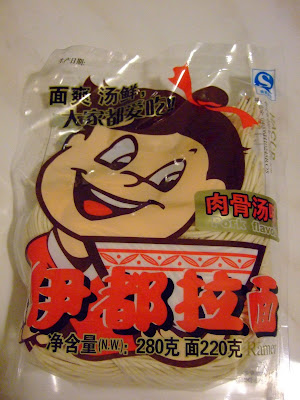 Each pack is enough for 2 light eaters, or 1 very hungry person, and costs S$3.50 per pack. It comes in 4 different flavours – pork, chicken, beef and kimchi. My sample pack was pork, since that’s the original flavour.

The cooking method is slightly different from regular instant noodles. These instructions are assuming you use one pack for 2 portions.

1) Bring a pot of water to boil. Dissolve each pack of soup base/flavoured oil in 250 ml of the boiling water.
2) Cook the noodles in the remaining boiling water for about 2 and a half minutes.
3) When done, strain the noodles and divide evenly between both bowls of soup. 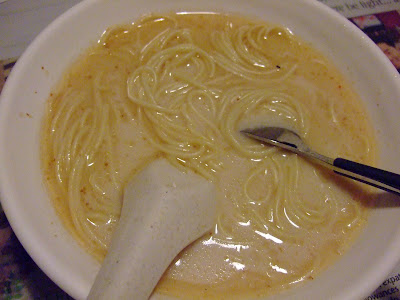 Voila! That’s it. It was really quite fuss-free, and although I couldn't be arsed to add accompanying ingredients like char siew and a soft-boiled egg, the taste was as authentic as you can get from home-cooked instant ramen. While the soup obviously didn't taste like it had been boiled for 8 hours/2 days/however long the authentic ramen restaurants do it, it was still quite tasty.

What really impressed me was the texture of the noodles. They remained springy, and tasted pretty much like what you’d get in restaurants.

A stall was set up in Raffles Xchange a couple of weeks ago to promote the product, and it was doing roaring business when I popped by. Debbie later told me that over the week or so that they were there, they completely sold out of their initial shipment.

This unfortunately means that there’s currently no more stock available at the moment. New shipments are planned for September, and while they are in talks with supermarkets to distribute the product, this may not happen for a few months. Now I wish I’d bought the rest of the flavours too. In the meantime, interested ramen-lovers will have to keep visiting their website http://www.yiduramen.com/ for updates on where the noodles will next be sold.

Give a pack a try if you like ramen. For instant ramen, it’s very good. My only concern is that the portions are large enough so it becomes a bit boring without added ingredients.
Posted by atetoomuch at 10:20 PM 1 comment: