Coming here on Wednesday night was a last minute decision, and we almost didn’t make it. While we vaguely knew that it was off Old Holland Road, we somehow assumed that it was in the same area as Forture Seafood, near the Brewerkz along Bukit Timah Road. We drove around aimlessly with no other food joint in sight, till A had the bright idea to turn down a little lane, and we found it nestled in the corner. For the record, it’s off Cherry Avenue, within the Maple residential area.

This used to be a simple corner coffee shop, but it now houses four stalls – a bar called Bar Bar Black Sheep, Emerald Garden thai food, an Indian joint selling curries and naan, and Smok’inn Frogz Kitchen (can they spell it any weirder?). We ordered from Smok’inn Frogz tonight cos we’d heard pretty good things about their burgers. We shared a beef burger, and a fish and chips. 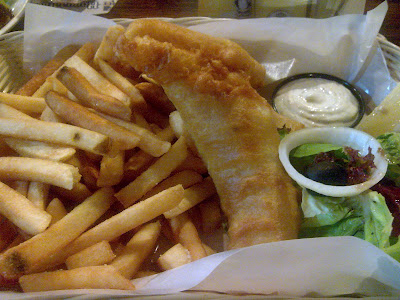 The fish and chips ($12) were surprisingly good. The fish was fresh and very moist and tender inside, and the batter was crisp and not too heavy, and stayed crisp throughout the meal. My only criticism would be that the batter was a tad salty. 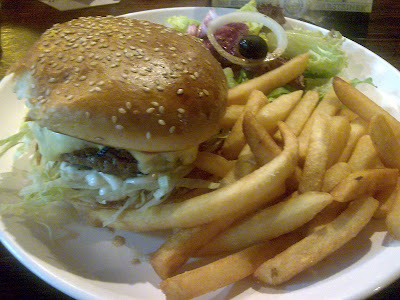 On the other hand, the beef burger was somewhat of a letdown; I guess it’s because it’d been praised sky high in some reviews we’d read. The patty was rather ordinary, though at least it wasn’t dry. The only accompaniments were a slice of cheese, some caramelised onions, mayo and bits of lettuce. Actually everything else was alright; the main thing I didn't like was the bun. It may have been toasted but it was still quite chewy, and even with a serrated knife it just refused to be cut, folding instead under the pressure of the knife. Plus it was after being drenched with the sauce from the caramelised onions.

All in all I just expected a bit more out of a $12 burger. Relish and One Ninety’s burgers may be in the $20+ range, but at least you know you’re getting pretty good quality.

This place is seriously hard to find and the setup here is a bit strange and bears describing.

Smok’inn Frogz is really just one of the three stalls that service the Bar Bar Black Sheep bar in front. Most people come here for a laid back drink and the food is really secondary.

Having said that, the fish & chips is probably worth it, and because of the amount of chips they give, you definitely won’t leave hungry. I don’t think the burger is worth $12 though.

Anyway, I don’t think I’ll do a full review of the place until I’ve tried the other two stalls as well.