Among the new restaurants at The Dining Edition at Marina Square is Saigon Lotus. We ended up here one evening when everything else didn't really call to us. We wanted something fairly simple so we didn't have very high expectations. 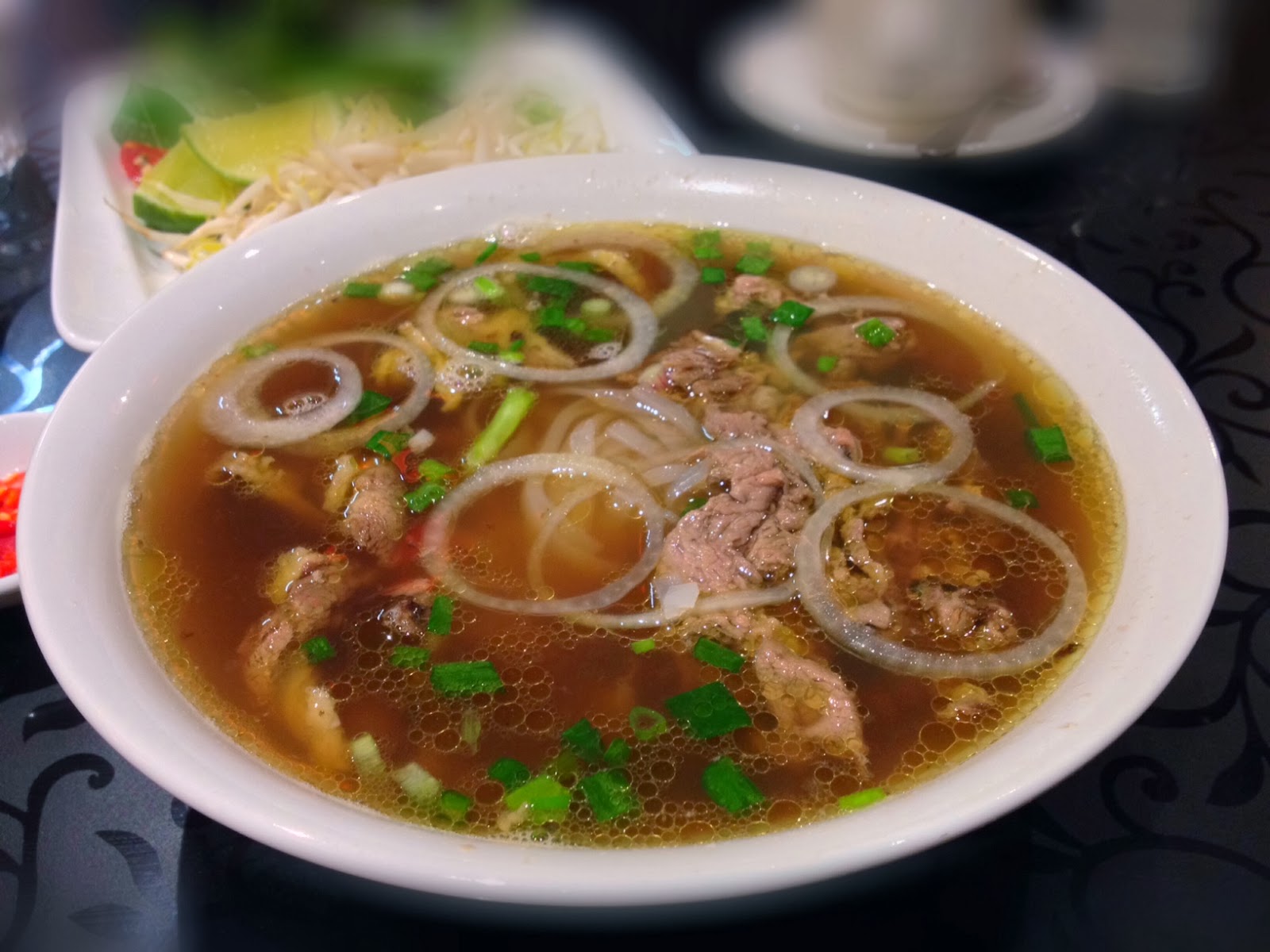 As it turns out, the pho here was surprisingly good. It's increasingly hard to get good pho in Singapore these days, with a good beefy broth that's synthetically sweet. The one here tasted like it was a proper beef broth, and the sliced beef and beef brisket was tender and deliciously fatty. 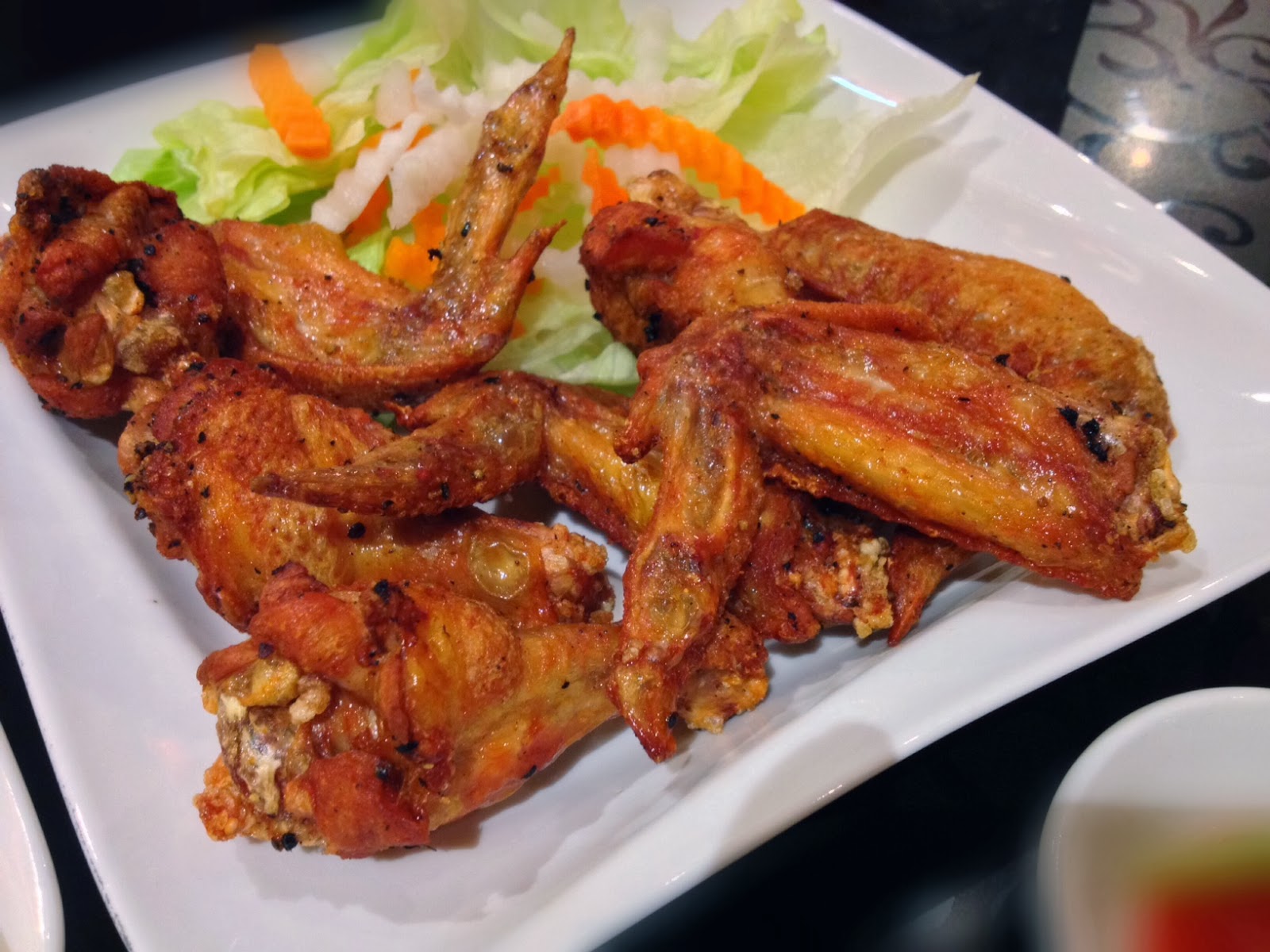 Their crispy chicken wings were a bit disappointing - too overfried and crispy for my liking, but I guess that is how they're billed...

We don't have pho cravings very often, but when we do, it's good to know that we can come here for a pretty decent bowl.

Very good pho. I hope this place survives despite the poor traffic in the area.

I've been meaning to get involved in volunteering efforts for some time now, but alas, most initiatives (understandably) involve working with children. For those who know me, saying that I'm not good with children is somewhat of an understatement.

Which is why I got excited when I read about Willing Hearts a couple of months ago - a non-profit 'soup kitchen' whose mission statement is to "provide daily meals and other support services to the underprivileged, the needy, and other marginalized members in Singapore, and to assist and guide them towards rehabilitating and reinstating themselves as useful members of our society". To me, the only way for volunteering efforts to be sustainable is to do something that you enjoy/believe in, so what better way for me/atetoomuch than to work with food?! A quick check of their website told me everything I needed to know - the kitchen operates daily, 365 days a year, from 6 am to around 4 pm. If, like me, you're interested in kitchen prep work, you need to get there early to help with the meals for the day. Otherwise, you can also offer your services to pack the food into containers for delivery, or even to help out with deliveries later in the morning/afternoon. Large groups like corporate teams need to inform them in advance of their visit, just so they're prepared, but individuals can just show up to lend a helping hand. 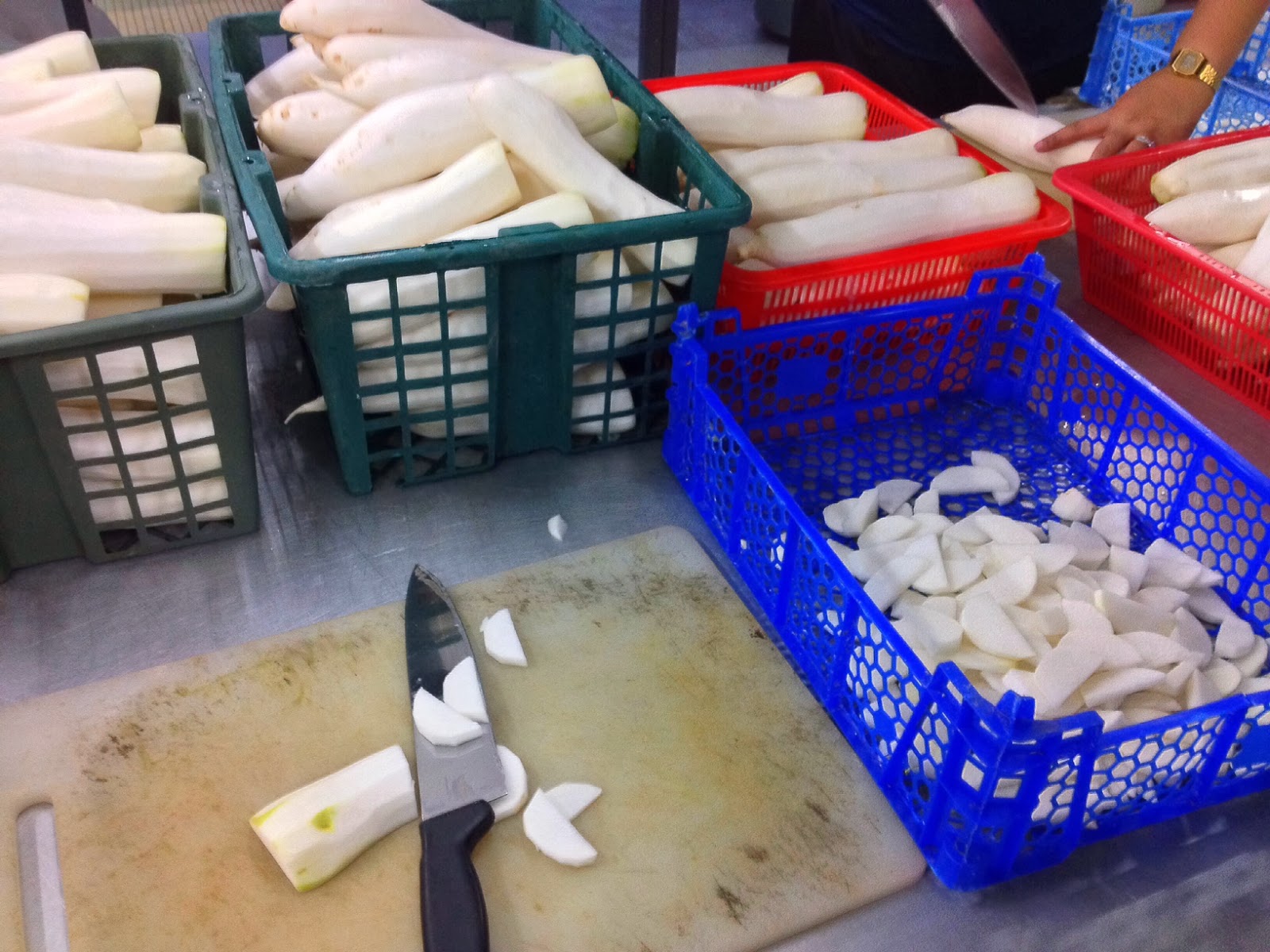 Y and I decided to go together so that we wouldn't be alone and clueless on our first foray there. We got there at 7 and spent a very enjoyable few hours washing and cutting copious amounts of radishes. The camaraderie in the place is infectious - we happened to be there with a large group from Marina Bay Sands, and though it was the first time for most of us, everyone got into the swing of things very quickly. 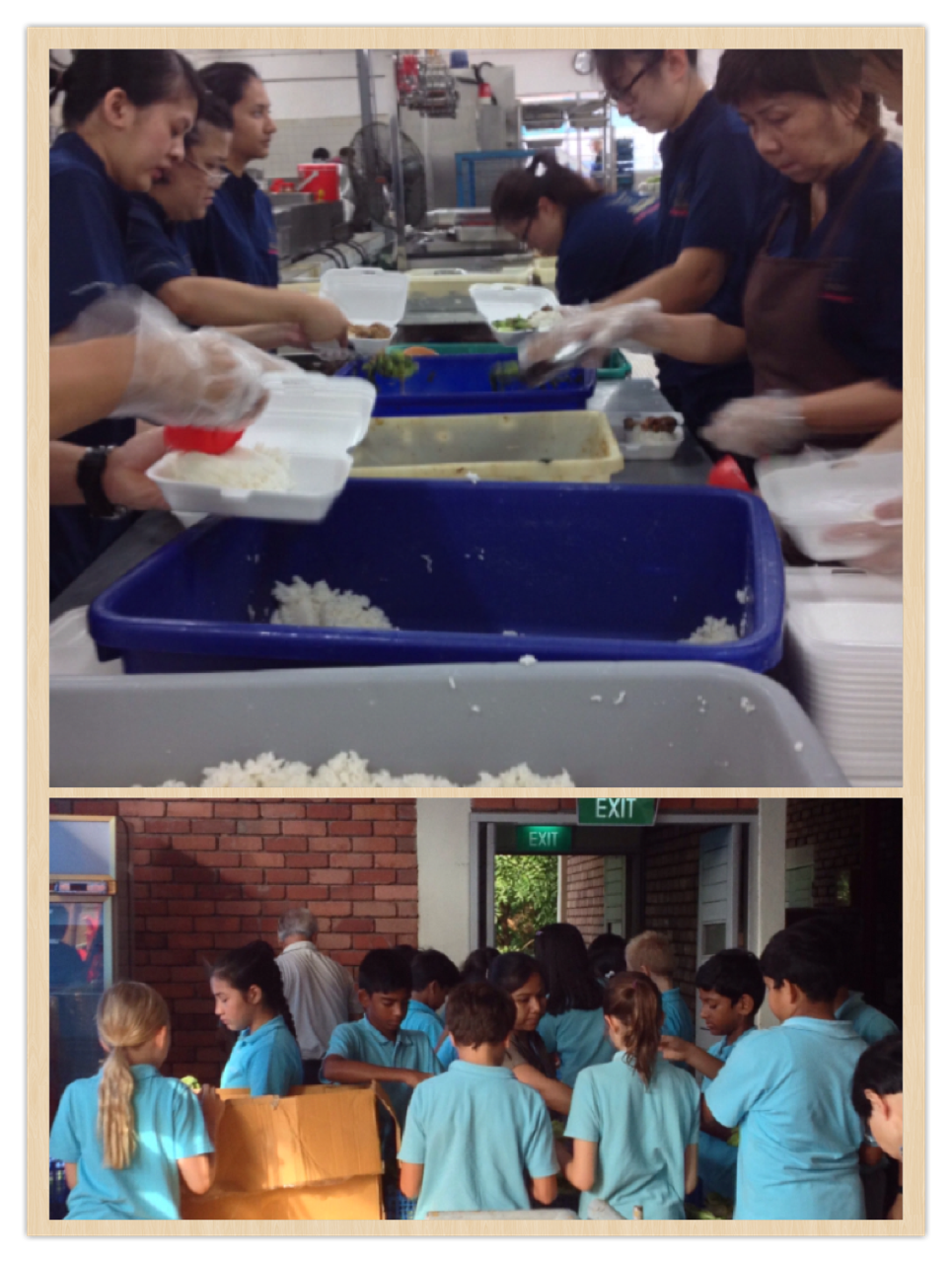 It's heartwarming to see small groups of retirees showing up together, and even groups of schoolchildren were there packing mandarin oranges. I left promising to return soon. Given that the bulk of the kitchen work is done in the morning, and depending on how much I want to contribute on a particular day, I can either take a morning off work, or just get in to work a little later than usual. Yes, I do have to wake up extra early and drive to MacPherson, but I figure it's the least I can do.

So proud of you. You go, girl!

Posted by atetoomuch at 10:00 PM No comments:

For lovers of small plates like us, 3-month old Bam at Tras Street looks set to be another new favourite. Opened by Chef Pepe, who used to be chef de cuisine at Santi at MBS, Bam may bill itself as a tapas bar but don't expect ordinary tapas like croquettas or garlic prawns. Instead, they offer exactly what we love - small plates of inventive tapas-inspired dishes, often with other influences thrown in as well.

Portions of each dish are just nice for 2 to share, and if you're like us, you'll probably need about 5 or 6 to be pleasantly full. Remember to save space for dessert though - this is one of the few places (for us) where the desserts really are worth ordering. 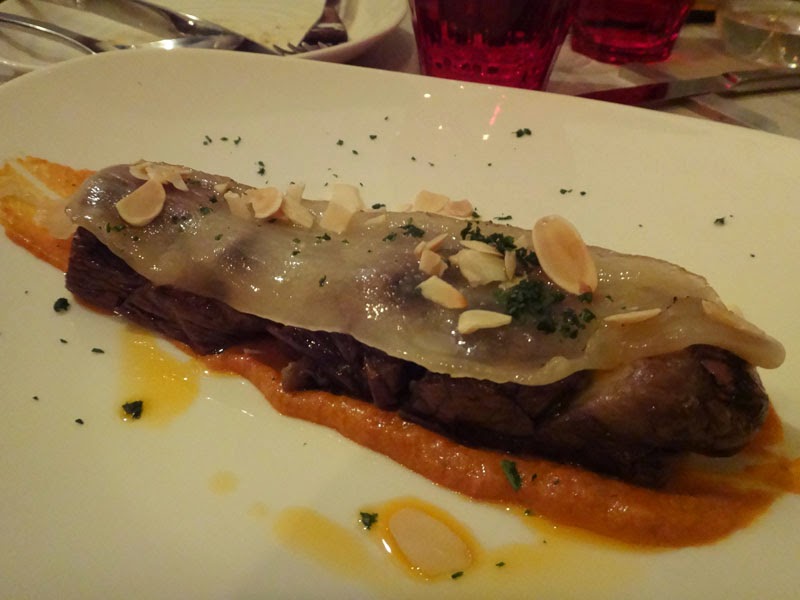 The Roasted Eggplant with Lardo and Romesco Sauce started out ok enough - till I got a mouthful of the lardo. The thin sliver of lardo was lightly torched on top of the eggplant, and packed a ton of flavour. 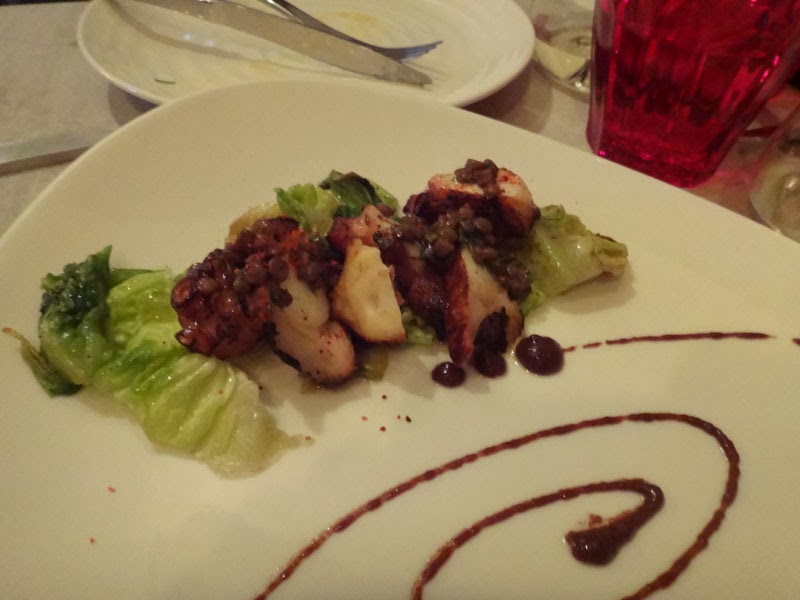 The Grilled Octopus with Gem Lettuce and Lentil Vinaigrette was so good that we promptly ordered another one (we were there with W and M). The octopus was really tender yet meaty, and wonderfully charred and smokey. This dish really brought us all back to Spain. The Pork Ear with Burrata and Anchovy Vinaigrette was a very interesting dish. I liked the different textures of the creamy burrata and the crunchy, slightly gelatinous pig's ears. I would've liked a bit more burrata though, so I'm not sure if this is on my order-again list. 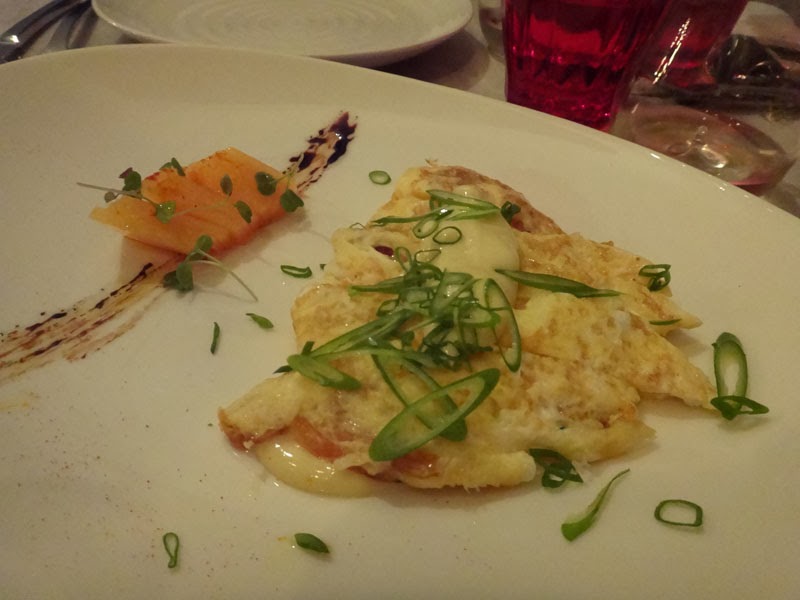 One of their signature dishes is the Sakura Ebi Omelette with Melon and All-i-oli (Catalan for aioli). I liked the creaminess of the omelette (I hate overcooked omelettes) and the umaminess of the sakura ebi, but I'm not sure that the melon was all that necessary. Next time we'll try the other egg dish on the menu - the Kampong Egg with baby squid and chorizo. 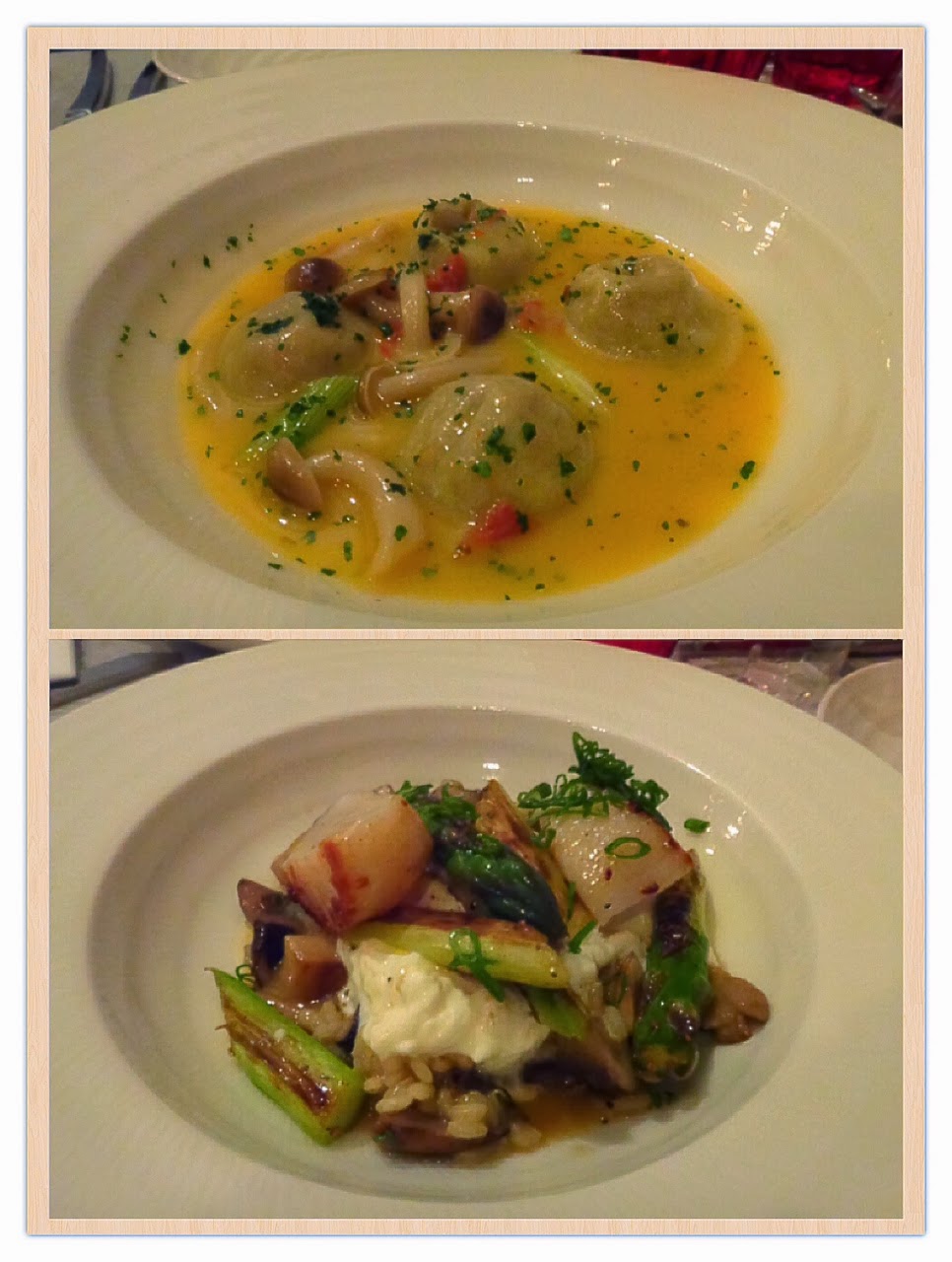 Don't go low/no carb while you're here, because all 3 of their pastas were outstanding. The Foie Gras and Chestnut Ravioli came in a light, delicate broth that was packed with flavour, and the Mushroom Rice with Scallop and Idiazabal Cheese was a risotto lover's dream. 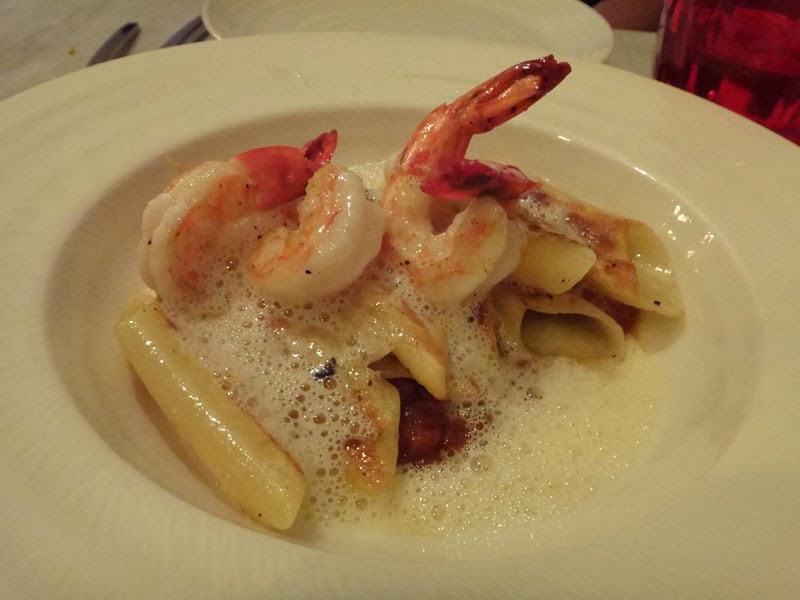 What really shone though, was the Pasta a la Plancha with Prawns and Sake Butter. The tubes of pasta were literally cooked on the plancha (flat-top), giving it a wonderful al dente yet crisp texture. It was served with the most amazing sauce and sake butter that we all but licked off the plate. Awesome. 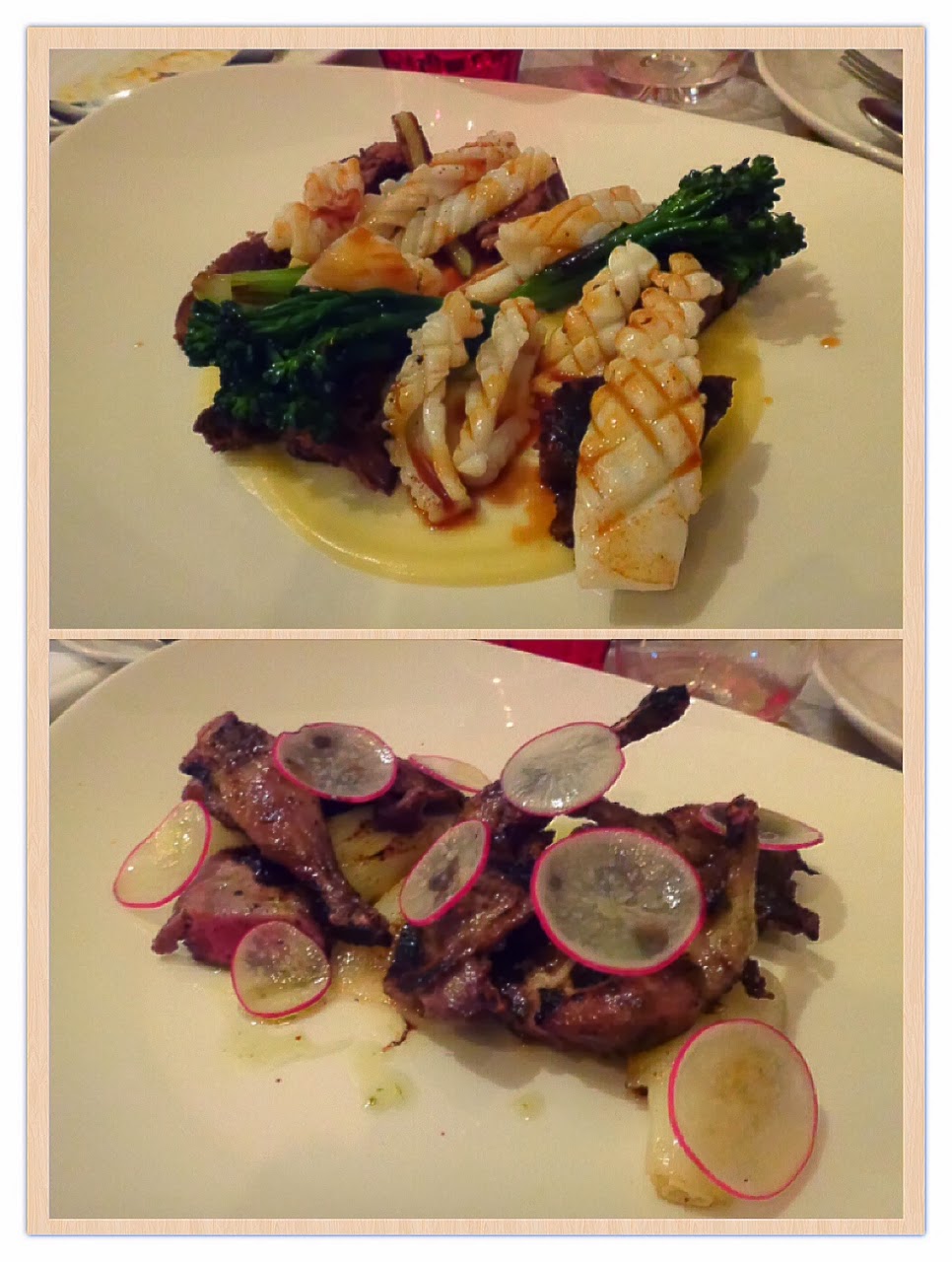 As far as the meats go, we had the Calamari and Beef Tongue, and the Grilled Quail with Leeks. I enjoyed both dishes, but everyone else wasn't as enamoured as I was. Apparently the Wagyu Onglet is better, so perhaps we'll try that next. 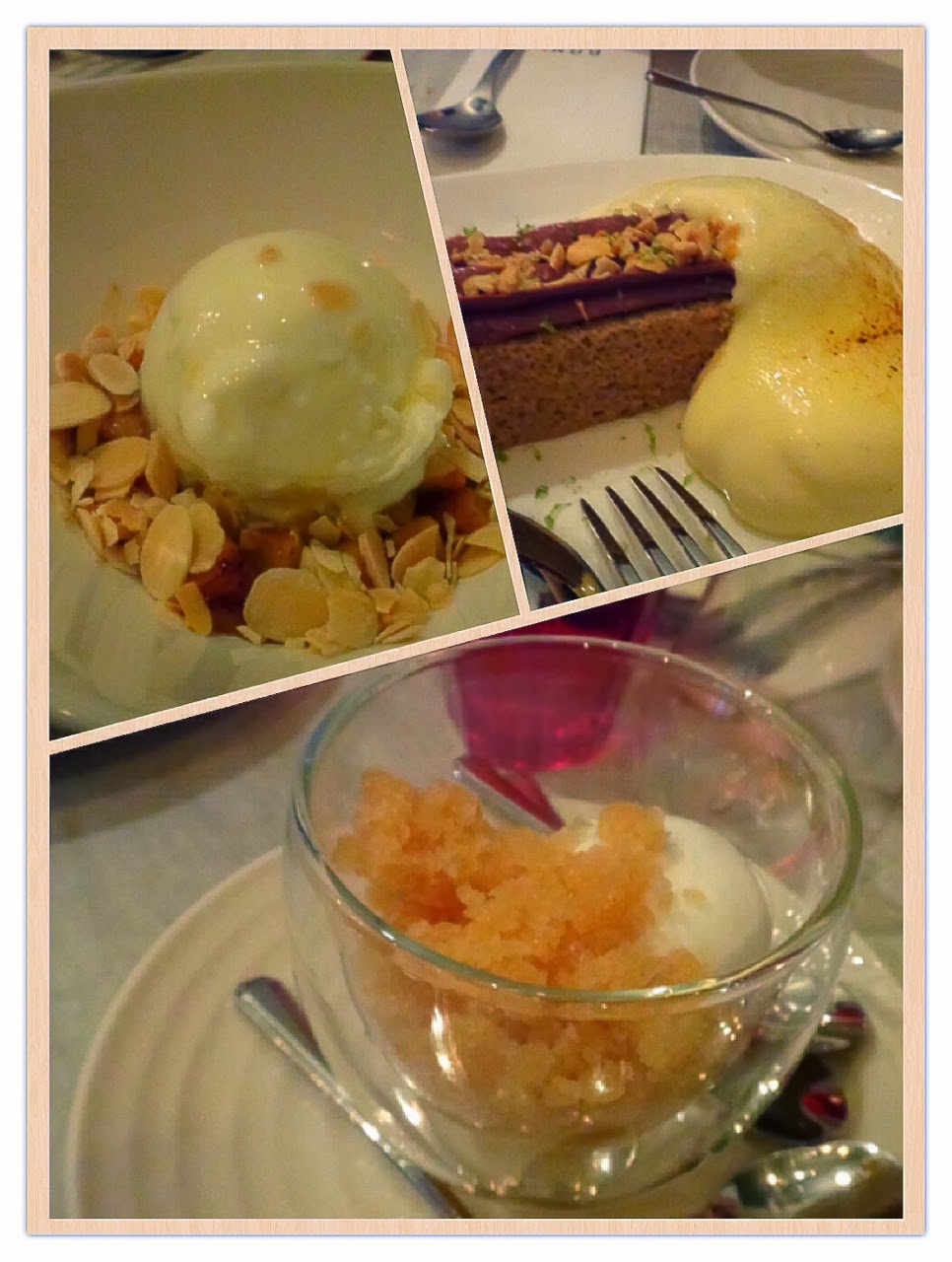 Desserts are definitely worth a try here. The Bailey's sponge with chocolate cremeaux comes with a huge dollop of the lightest, airest Crema Catalan I've ever had, and lightly torched too.

As good as that was, the other two desserts were more standouts. The coconut sorbet with pineapple and tea granita was really light and refreshing, and the lemon zest ice cream with caramelised banana was perfectly balanced - just when the ice cream seemed a bit too tart, the cubes of banana helped to sweeten and mellow it down.

They've only been open for 3 months but already they seem to be doing pretty well. We should probably head there again sooner rather than later, before it starts being on everyone's radar and it gets harder to snag reservations.

The Mustard Incident is a gourmet hot dog joint that opened recently in the newly renovated Tangs basement, opposite Krispy Kreme. Seating is limited, with just one small 2-seater and a U-shaped counter for dining-in. I guess they assume that hot dogs are generally on-the-go food. 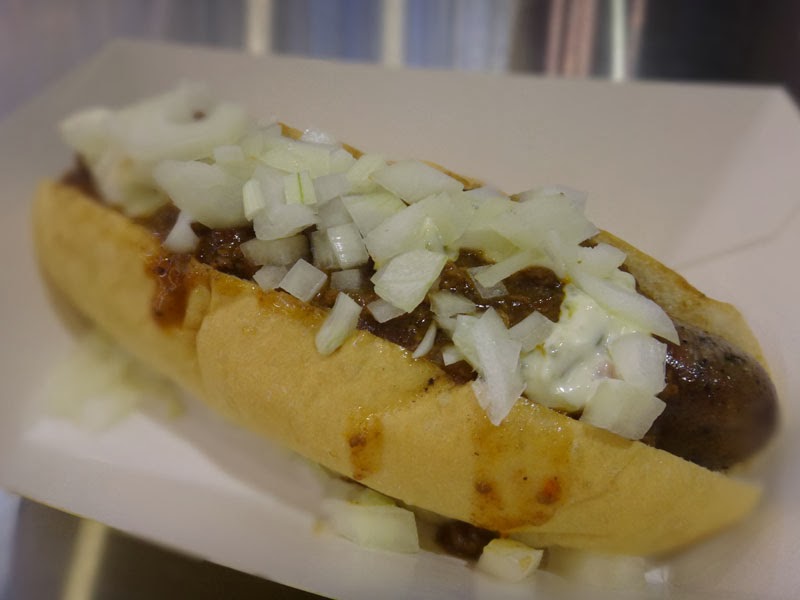 You may want to be seated for some of their creations, though. Some, like the Coney Dog and the Frankenstein, have a chilli topping that makes it pretty messy, but oh so delicious. The Coney Dog is a beef sausage with bean-less (yay) chilli and topped with diced white onion. The Frankenstein is, literally, half a beef sausage and half a pork sausage held together with bacon (hence the name), chilli again, hot sauce and sautéed onions. 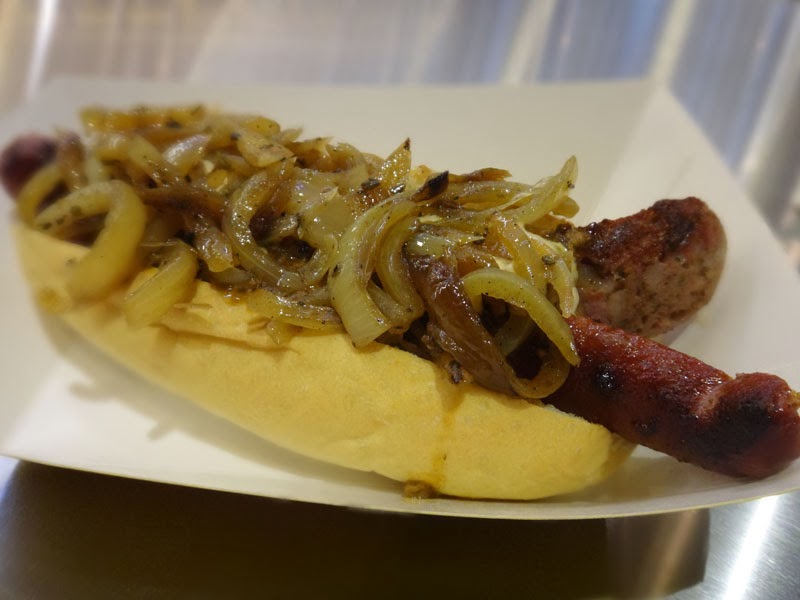 I had the Frankenstein and A had the Coney Dog. Both were very good – I especially like the sausages, which have a good snap to casings. I liked mine because the sautéed onions took the edge of the raw ones; A liked his precisely because of the raw onions.

They have seasonal flavours too, like a turkey, ham and cranberry one over the holidays, as well as some limited edition flavours like a Sauerkraut and a Breakfast dog. If both are still available when we’re next in the vicinity, they’ll be our next picks.

I was a bit apprehensive at first given the $10 price, but these are seriously good hot dogs and totally worth it. The staff is friendly as well. The only problem with the place is the cramped counter eating area. Can't be helped I guess, but this is a definite go-to for a good dog.

Posted by atetoomuch at 10:14 PM No comments:

This casual outpost of Taiwanese restaurant Shin Yeh at Liang Court took over the premises at Square 2 that used to be occupied by Zhou's Kitchen (they're all Tung Lok restaurants anyway so I figure they just do musical chairs based on what's currently the most viable). 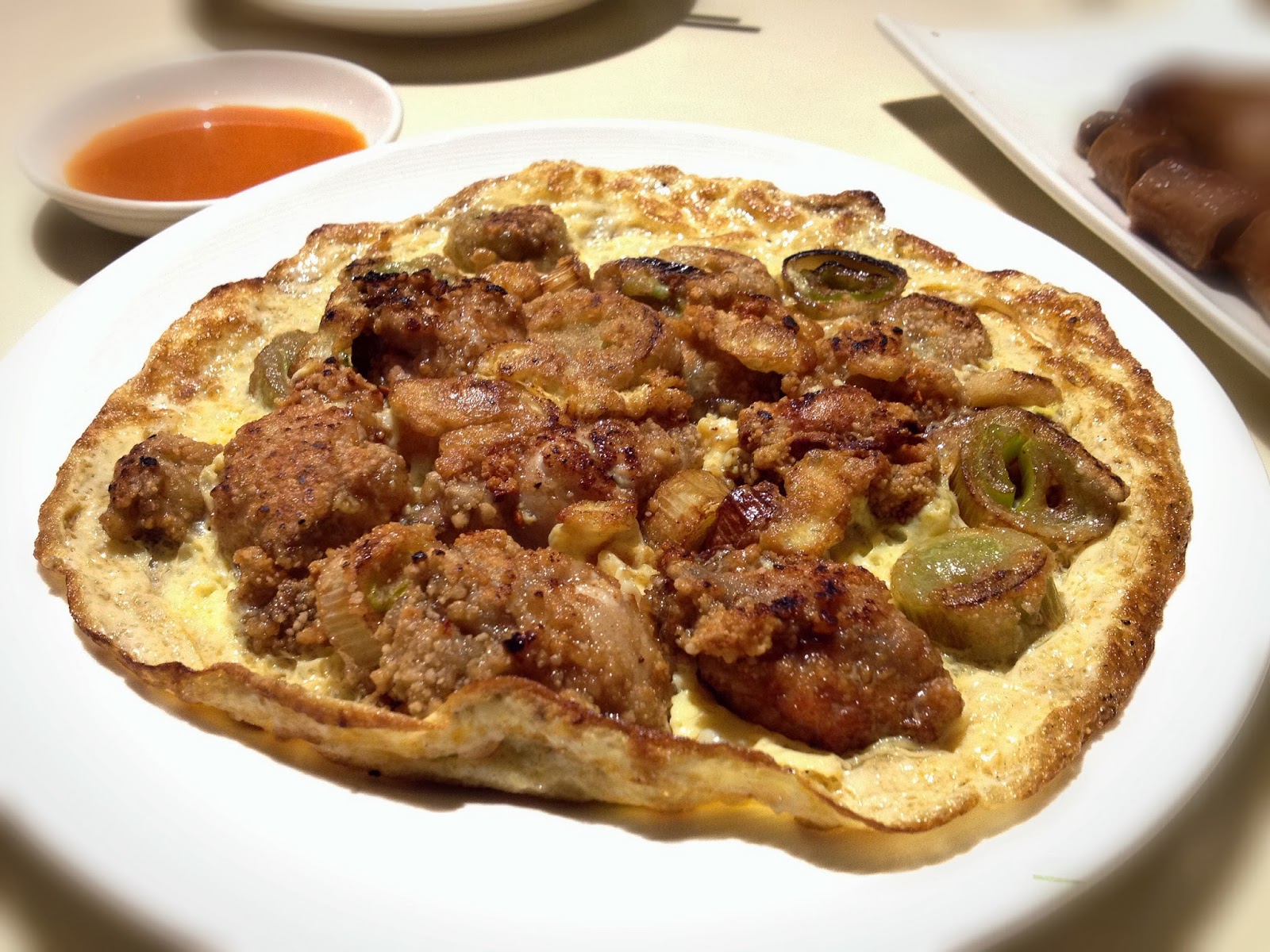 Most of our favourite dishes from the Liang Court branch are also available here, maybe in a simpler form. The oyster omelette, for example, is in the form of a thin layer of egg, topped with fried oysters and leeks. I actually think this is more successful than the regular version, which during recent visits has been bulked up with a bit too much starch for my liking. 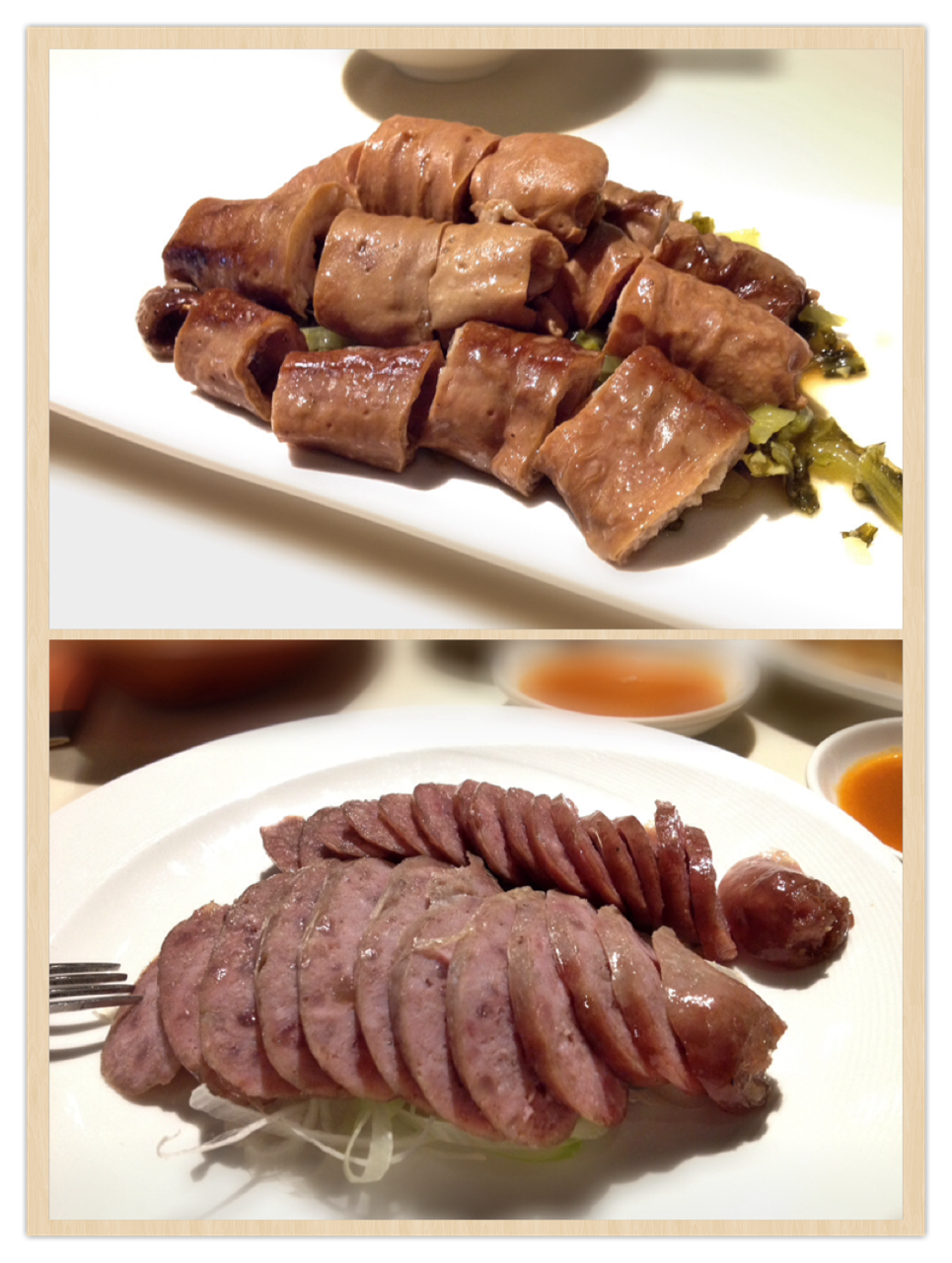 A's favourite braised pig's intestine is also available. The intestines were nicely cooked but there wasn't enough braising liquid to douse our porridge the way we like to. The homemade Taiwan sausage was good, but the portion was a bit too much for me, since A's not a Taiwan sausage fan (all that for just $4.20, insane!). 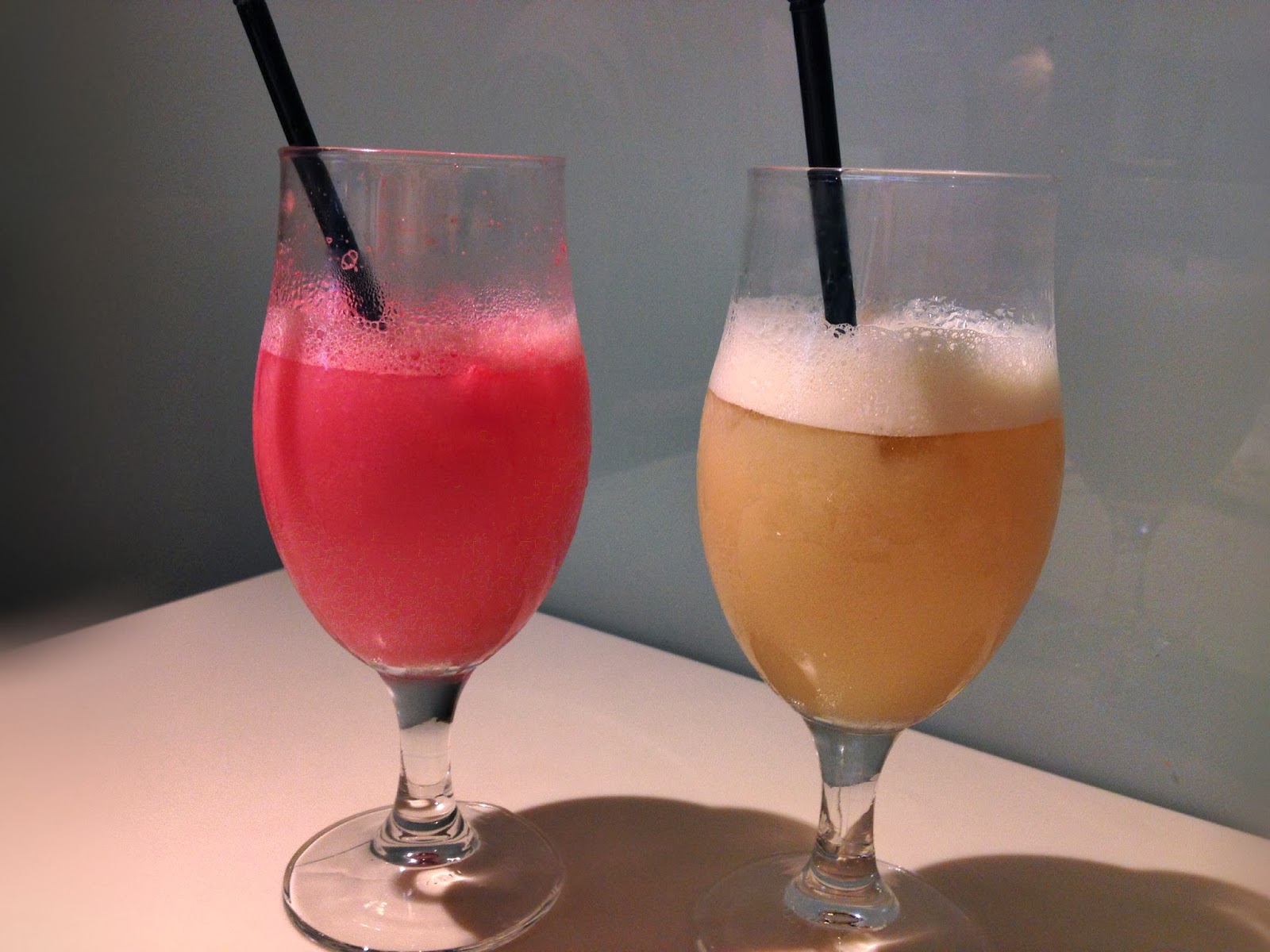 Their drinks were a very pleasant surprise. I'm normally not one for weird sweet drinks but they didn't have a normal chrysanthemum tea and I was put on the spot to order something. I got Yogurt Green Tea, and A ordered the Watermelon Milk Tea. Mine was a nice refreshing mix of yakult and jasmine tea, and A is completely enamoured with the Watermelon Milk Tea.

Besides the food (and drinks) being really good, what strikes me is how reasonably priced it is. Every dish we ordered was under $10, including the oyster omelette which was an amazing $6.90.

Pity we don't live close to Square 2 anymore, or we'd be here every week.

Watermelon milk tea sounds crazy but it turned out to be crazy awesome. Great if you like sweet flavoured teas. The rest of the food is good and relatively cheap. Highly recommended.