While most people were probably having steamboat or traditional Chinese food for their reunion dinner, we had ours with A’s parents at a Brazilian churrascaria restaurant at United Square. It was close to (our) home, and A’s dad had managed to score a one-for-one promo that was still valid on the eve of CNY.

I must admit that we went with no expectations. I mean, who offers one-for-one promos on one of the most lucrative days of the year? I must say that we were very pleasantly surprised at both the variety and the quality of the food.

The salad bar was fairly comprehensive, offering interesting items like a tomato and heart of palm salad, and traditional Brazilian fare like feijoada. But the highlights were the meats. Quite a wide range was available – spicy wings, juicy chicken thighs, lamb, beef sirloin, spicy sausage, ribs, fish and chicken livers. By far the two best items (in my opinion) were the chicken hearts and the roasted pineapple. The hearts were tender and juicy, and the pineapple was both sweet and slightly savoury.

Highly recommended with the one-for-one promo. Without the promo, at about $50 per person, it’s still not bad, but I’m not sure if the other churrascaria joints may have slightly better cuts of meat.

Definitely worth it with the offer we had. I was very surprised by the quality of the service and the food. I even found myself having seconds of the chicken hearts.

My only complaint would be in the very open salad bar. I think they really should have a sneeze guard, especially on the side facing the entrance. I mean... ewww!

We had our pre-pre-Valentine’s Day dinner at Sage this year, and decided to splurge with each of us having the degustation menu. A swapped his foie gras for the mushroom cappuccino – not a fair exchange in terms of cost, but more than worthwhile in terms of the respective pleasure that each dish would have brought him. 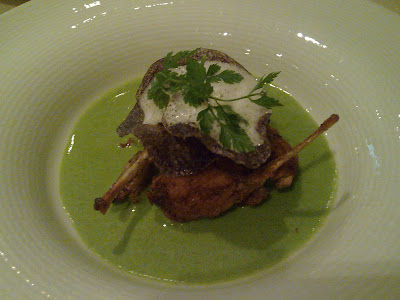 The first course was a huge improvement from the previous degustation’s crab salad - frog’s legs with purple potato chips and truffle foam. I can’t remember what the green sauce was, but it had a nice tartness that complemented the frog’s legs very well.

The next few courses were similar to the previous ones – the quail, and the Hokkaido scallop with crab cake. They were no less delicious; in fact, because we each had a portion all to ourselves, we could really savour the dish to the fullest. My foie gras was again seared to perfection, and A’s mushroom soup was also divine. 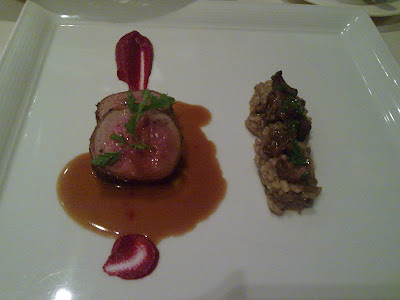 The main course was the bacon-wrapped veal with the porcini risotto. This was possibly even better than the first time we tried it, as the bacon flavour was even more prominent. I think next time if they have this on the menu, I’ll just order this as a main course. Out of the various mains we’ve tried here so far, this is still the best. 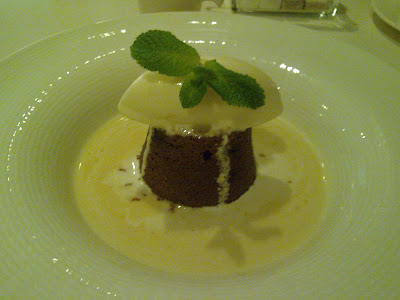 Dessert was a chocolate and blueberry cake laced with some kind of alcohol and topped with a mascarpone ice cream. This was quite light, but occasional mouthfuls delivered quite a strong alcoholic punch.

Another very satisfying meal, though it did take quite a while because we got there at 8 – probably right in the middle of the Friday night rush. Funnily enough, we saw B and CH there, who decided to come after reading one of our previous posts. Hope you guys enjoyed the meal, and that our recommendation didn’t disappoint :)

The place was almost full, and although the service staff were very attentive, the food was very slow in coming out.

A and I have eaten here separately on a number of occasions, but we met for lunch here today so that we could finally write about it.

Located at the Market Street car park, Smoke Shack is a welcome addition to the Raffles Place lunch scene, but be warned – there’s limited seating and coupled with the smells of smoked and sizzling meats, you can walk away smelling a bit like a barbeque if you dine in. Getting take-out is recommended.

Smoke Shack sells sandwiches with all kinds of smoked meats and even seafood. I’ve tried the Montrealer (smoked meat on wholemeal bread) and the smoked lamb with sautéed greens on foccacia on previous occasions, and today I had the smoked duck with blue cheese and pear on ciabatta. 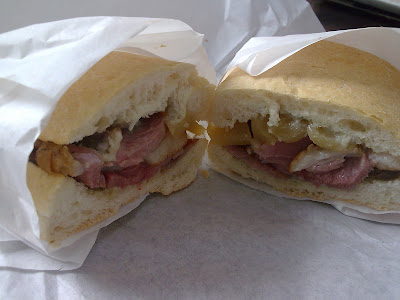 The smoked duck wins hands down. The duck is tender and has a wonderfully smoky aroma, and is well paired with the blue cheese and pear. Ciabatta is also the best bread that they have there – it’s soft without being crumbly. My only complaint is the size of the sandwich. It’s slightly smaller than a 6-inch sub, and with less fillings. Definitely not enough if you’re hungry.

The Montrealer’s not bad – I asked for sauerkraut to be added so it added a nice tart edge. The sandwich is pretty big, but I don’t like the regular wholemeal bread that they use. It gets quite dry and crumbly. The lamb is ok but quite forgettable compared to some of the other sandwiches.

We also tried the steak sandwich today, which came with lettuce, tomato and caramelised onions on foccacia. There wasn’t much steak, but what little there was was very flavourful.

We noticed many orders for the Chivitos sandwich, and I’m definitely going to try that next – mozzarella, smoked ham, bacon, pickles and olives. Service has always been quite ok on previous visits, but today it seemed a bit chaotic, with mixed up and delayed orders. Still, they're definitely trying hard, so I have to give them credit for that.

Service was chaotic. You can tell they try very hard, but don’t cope really well when the rush comes. It also takes a while for food to be prepared.

When it does come though, it’s really good. I only have a few issues:
- the rye bread sandwiches get soggy cause the bread doesn’t hold up well
- the portions for most of the sandwiches are pretty small for the price ($7 to $10)

I’d suggest either going early, or going late (and risk them running out).

Friends at Jelita – an update

We ended up at Friends at Jelita, almost 2 ½ years after our last visit, after a last minute decision to do our weekend grocery shopping on Friday night instead. We wanted a simple, fuss-free dinner so we bypassed some of their fancier options in favour of their tried and tested squid ink pasta. 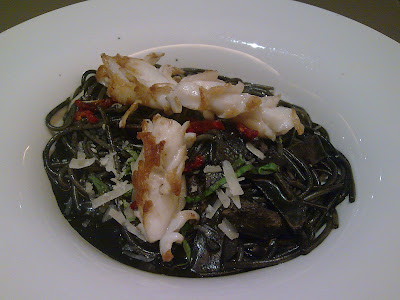 While not quite as full bodied and flavourful as it was before, this was still very good, and once of the better squid ink pastas around. It’s a pity that they now use spaghetti instead of the previous pappardelle. I think the smooth texture of a flatter pasta goes better with the sauce than spaghetti. Still, for $19 this was a very satisfying dish. 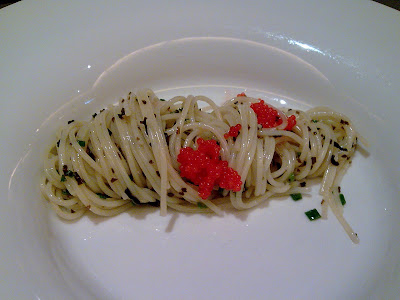 We also shared another starter pasta – cold angel hair pasta with seaweed and tobiko roe ($15). This was reminiscent of the one at Ember but without the shaved abalone. It may have lacked the finesse of Ember’s but it was a very good (and cheaper) alternative.

If you go for the basic dishes, prices are quite reasonable, and overall it was a very pleasant meal. Methinks we may be doing Friday night grocery shopping more often, at this rate.

Much better than I expected. The service is still a bit blur, but the food is excellent.

We’ll probably make this a semi-regular dinner spot in the future.

Posted by atetoomuch at 10:47 PM No comments: