Nakhon Kitchen, a no-frills Thai eatery, has opened up along Pasir Panjang Road (just down the road from Manhill), giving E-Sarn a run for their money. Prices are lower and the food is, in my opinion, better, so it's quite a no-brainer that this has quickly become our new go-to place, both for Thai and for a cheap, simple dinner out.

We've tried a variety of dishes and so far most of them have been good. Some highlights are: 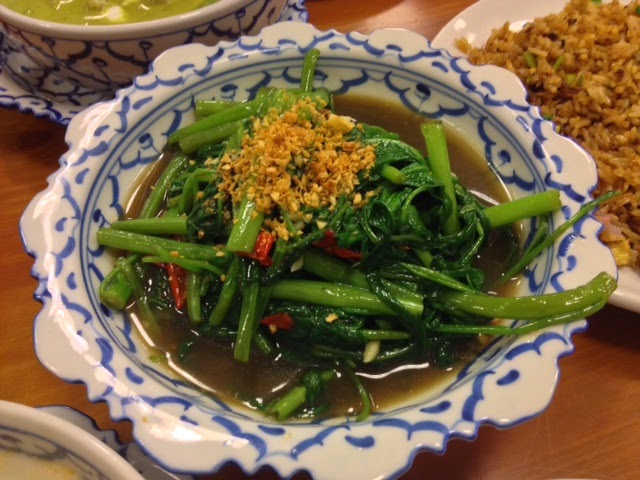 Thai-style fried kang kong - this has chilli padi for added kick, and the garlicky gravy is addictive. 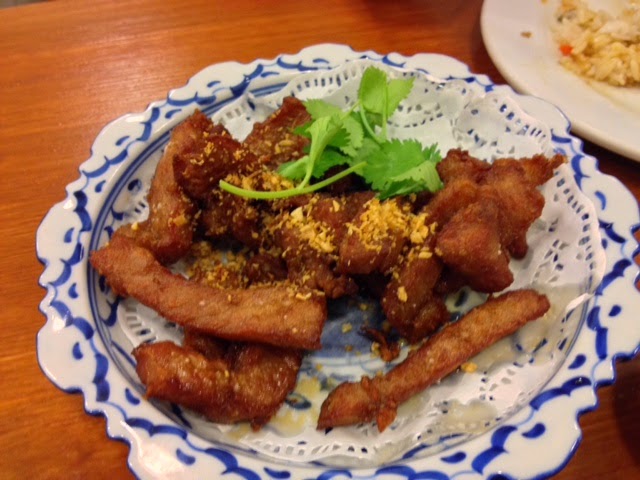 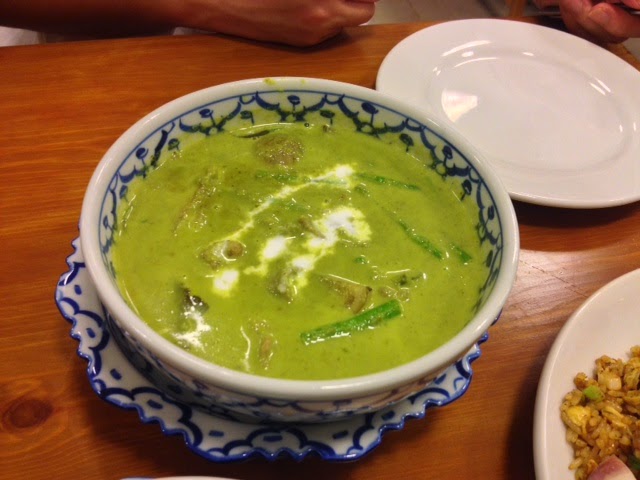 Green curry. This is thick and flavorful and definitely beats the green curry at E-Sarn. 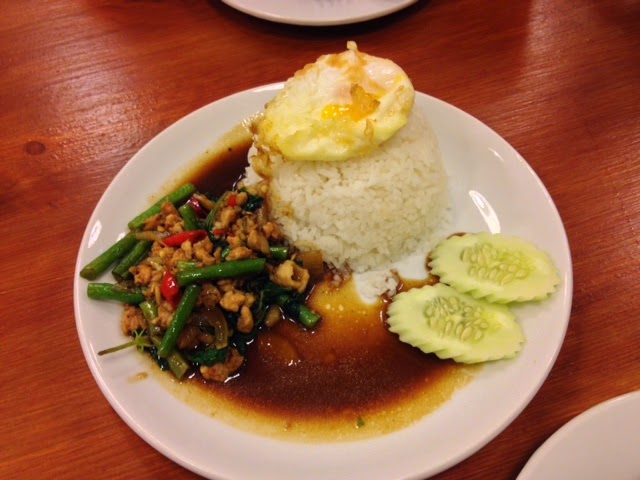 Their basil chicken rice is unapologetically simple but addictively tasty.

Surprisingly, their creamy tom yam soup and stuffed chicken wings, in comparison, missed the mark. Still, we've barely scratched the surface with the menu so I'm sure we'll find our favourites in due course.

The food is above average. The service is good. The seating is kinda cramped. I wouldn't go at peak period but it's going to be a regular option for late dinners in our hood.

We hadn’t been to Ember since they revamped and re-opened under their new head chef, so we decided to stick with tradition and returned for our anniversary in November. Thankfully, although they’ve launched some new dishes, they’ve kept some of their bestsellers like the Chilean seabass (yay!) and the pork belly. 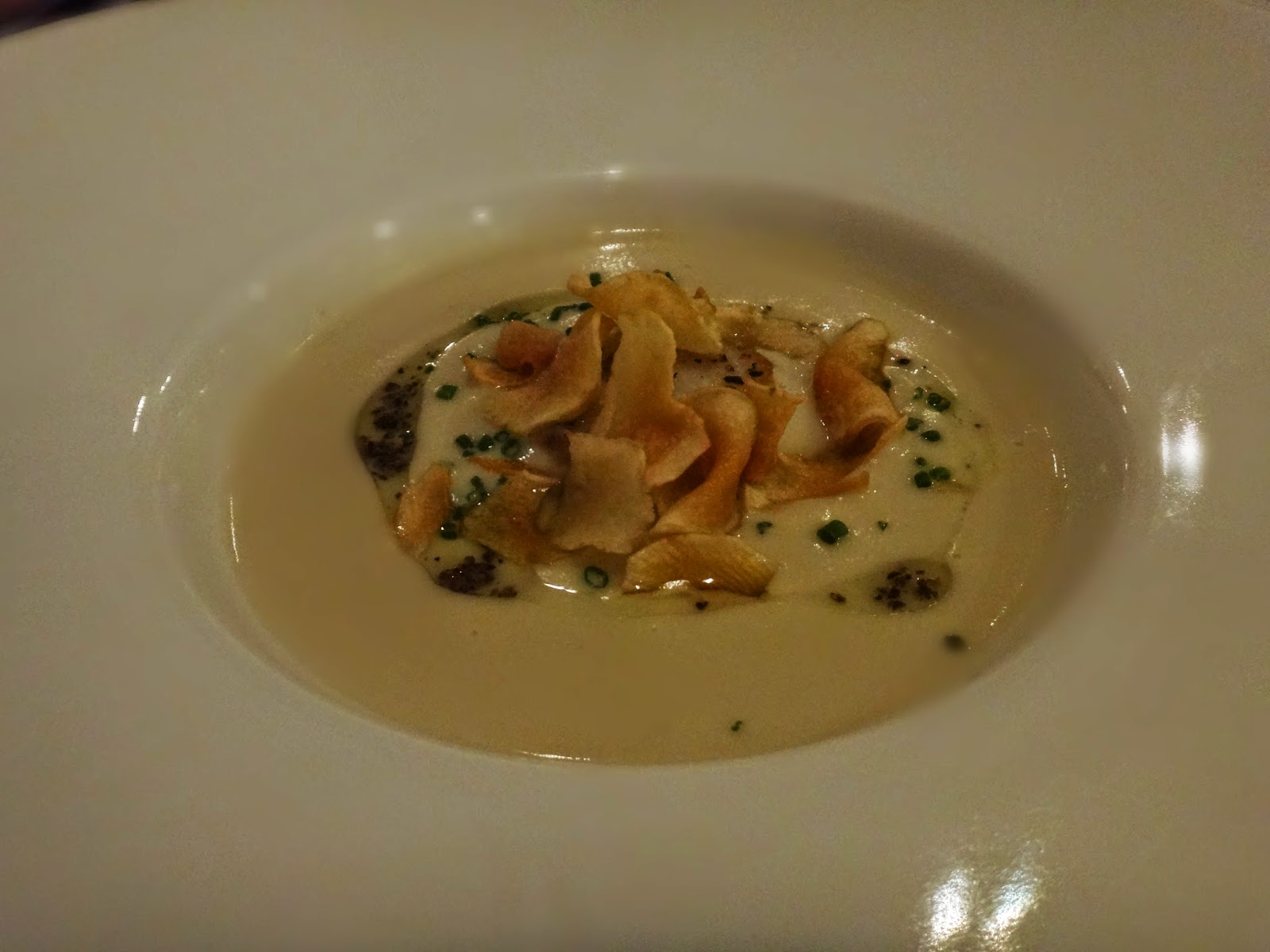 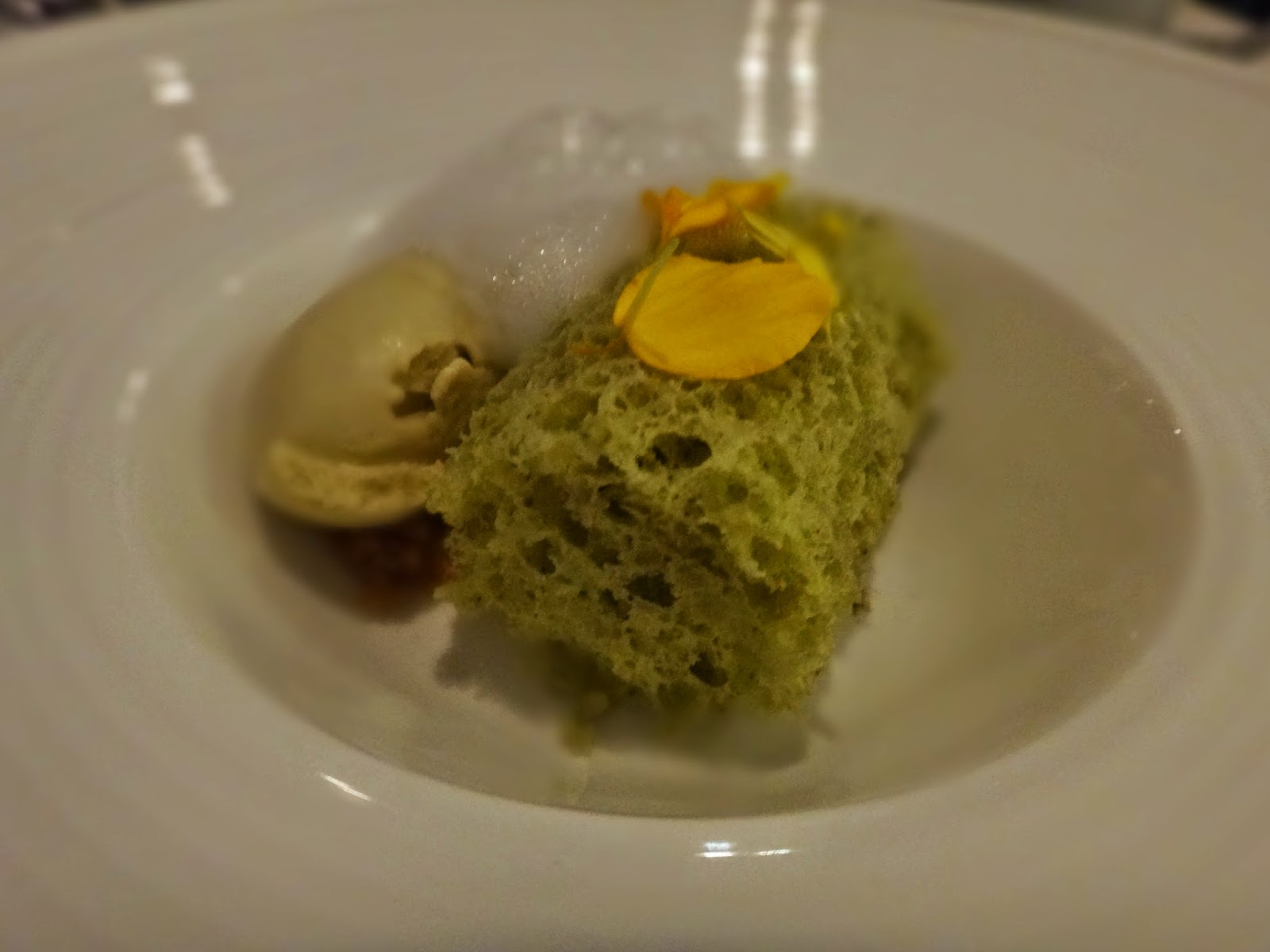 I’m happy to report that it’s still pretty much the same Ember experience, from the warm sundried tomato bread to start with, to the 4-course set dinner for $88. We tried a few new dishes, like a Jerusalem artichoke soup and a light pistachio sponge dessert, which were really good. 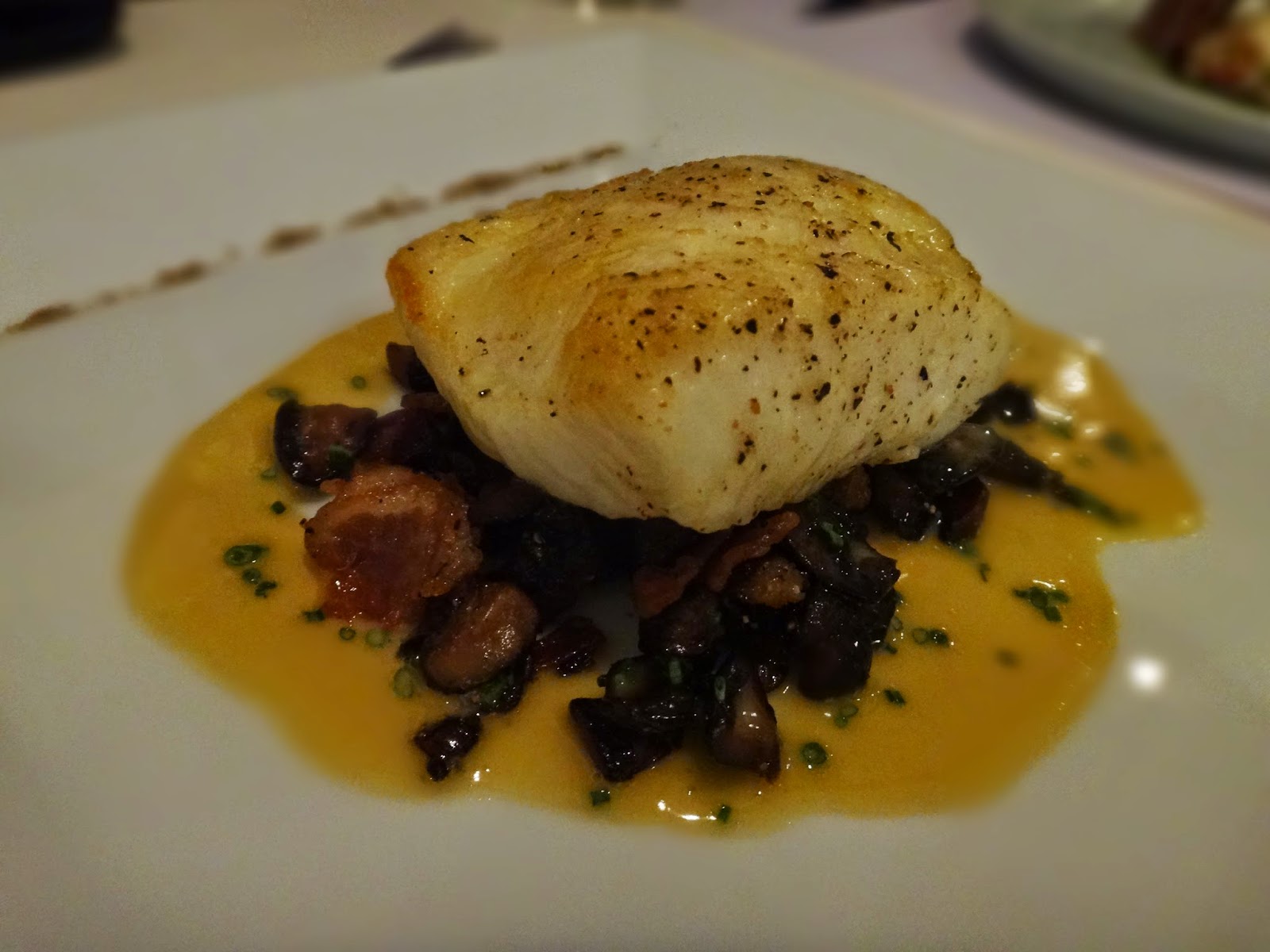 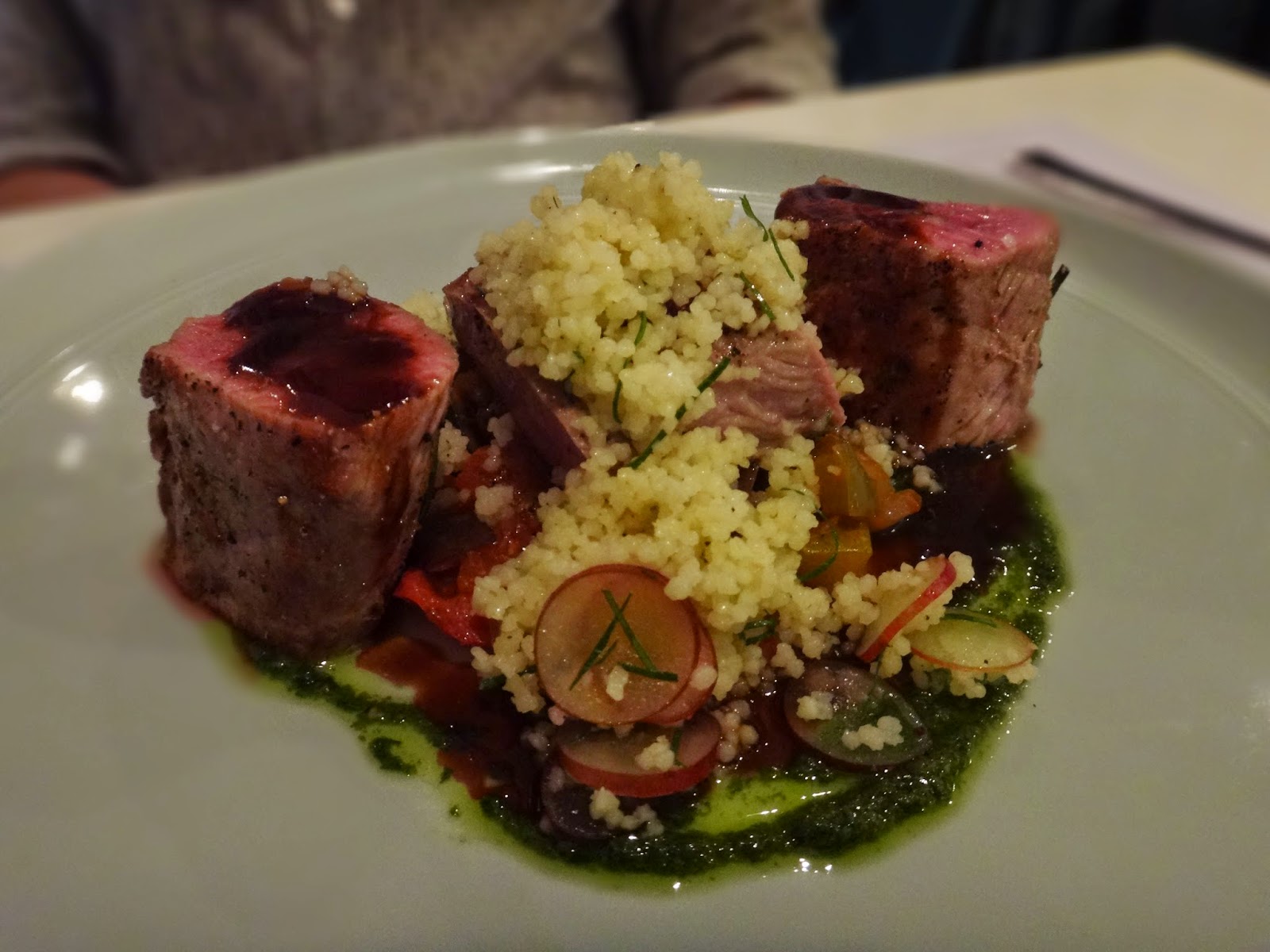 Of course, I made a beeline for the Chilean seabass, and it's still as good as ever. Perfectly cooked fish, and a very flavourful bacon and mushroom ragout. The lamb dish that A had was a little character-less in comparison – the lamb was well-cooked but it seemed to lack any real lamb flavour.

All in all, if they maintain the standard and keep our old favourites, looks like Atetoomuch will keep celebrating our anniversary here.

Still good. Although I miss the old wait staff. Worth a revisit.

Posted by atetoomuch at 10:30 PM No comments:

I know Paris is the home of Michelin stars, but the pomp and pageantry around fine dining really isn’t our thing. Some may consider it sacrilegious that we didn't pay homage to temples of 3-starred fine dining like Joel Robuchon and Guy Savoy, but we were happy going with the “bistronomy” movement that’s now sweeping Paris – top chefs opening casual bistros in a bid to make fine dining more accessible.

One such bistronomy place is Spring, which was arguably the best meal of our entire trip. Everything from the food to the attentive but not overly obsequious service was stellar.  If we’re ever in Paris again, this is a definite revisit. 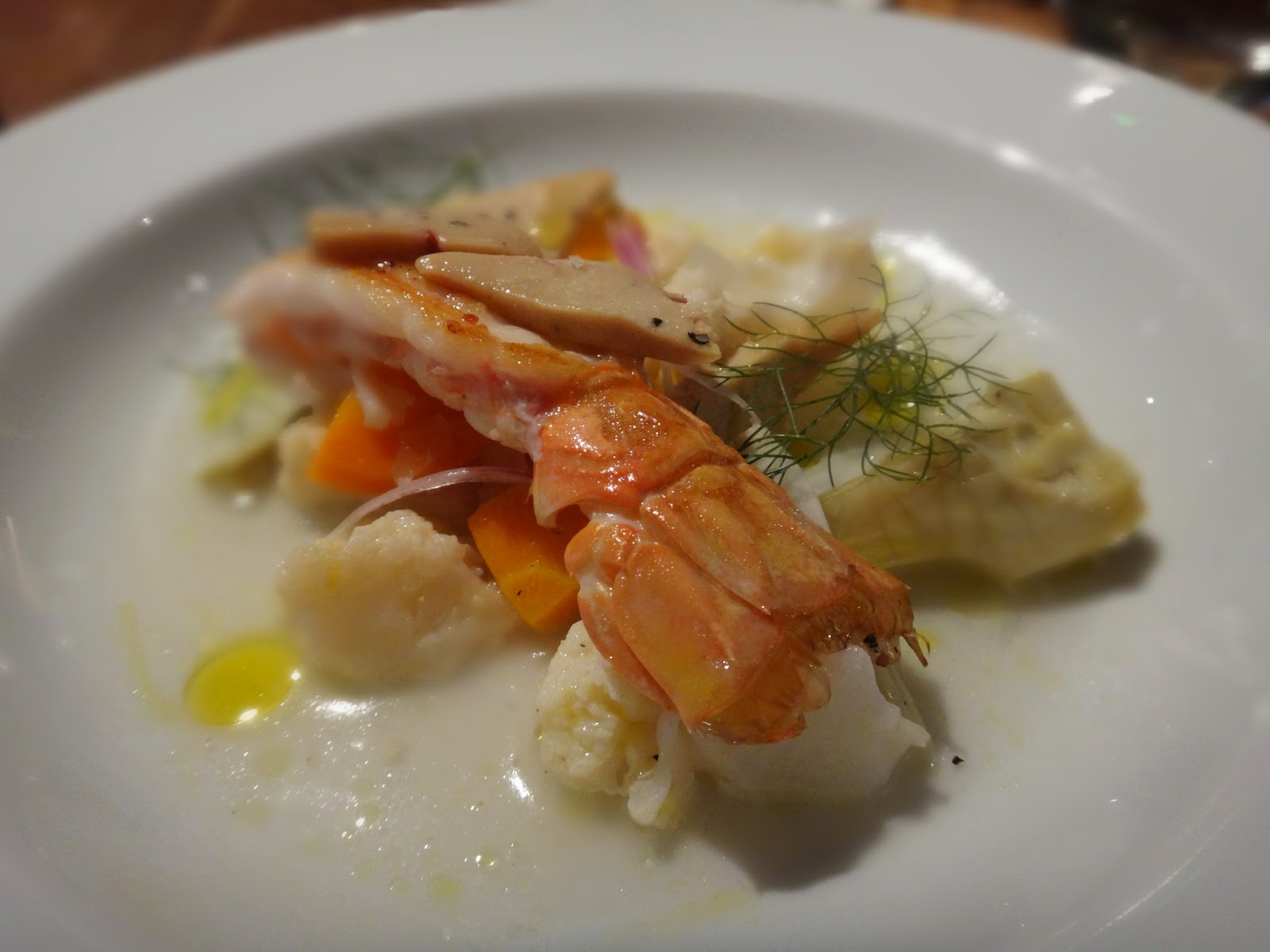 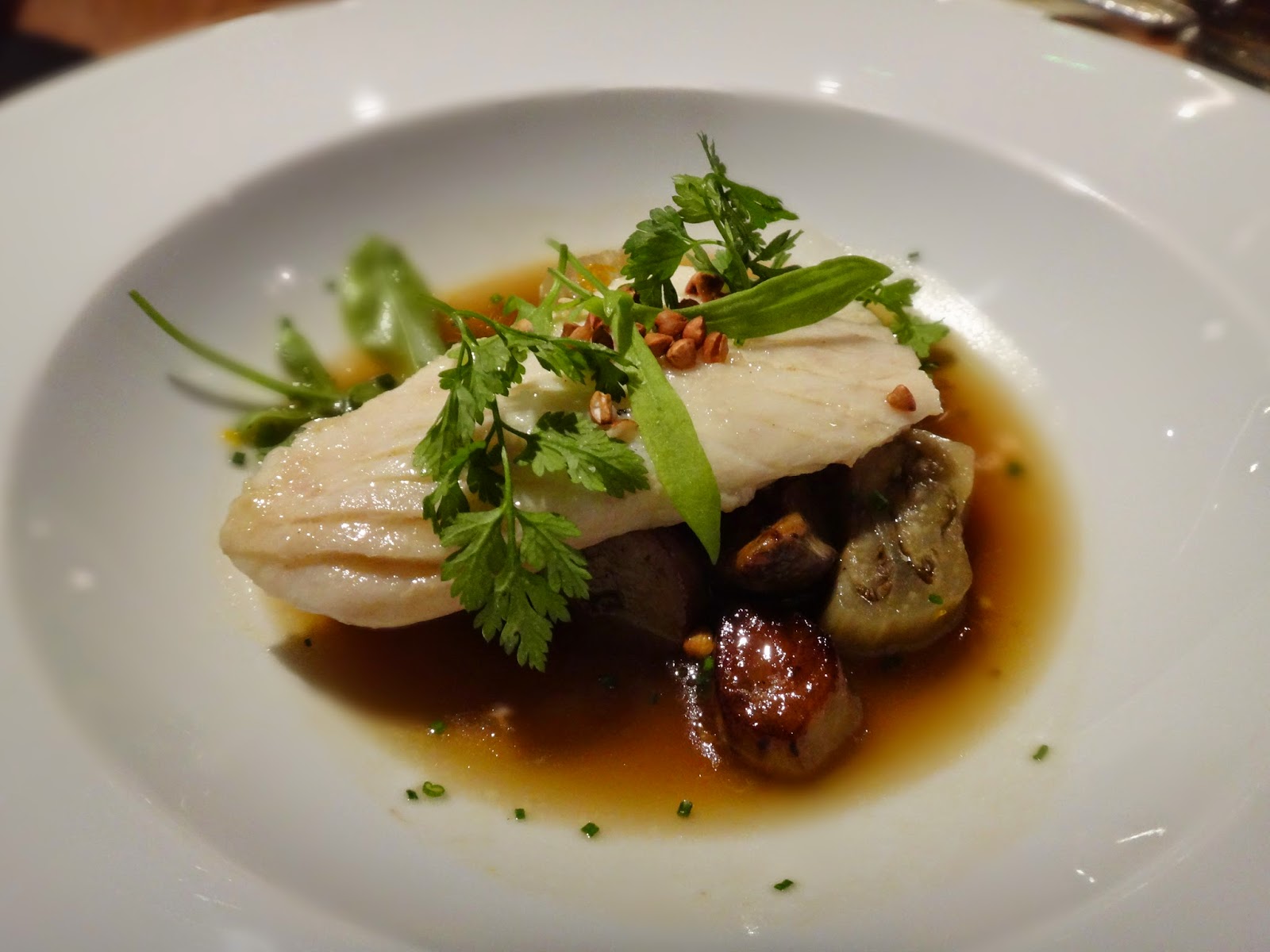 The poached John Dory in a cepes and chicken broth with eggplant and buckwheat was also delicious, with perfectly cooked fish and an amazing broth.

What we loved so much about Spring was how they managed to get their flavours so perfectly balanced. Everything was light and fresh, with just the right amount of flavour and tartness to brighten and not overwhelm the palate. I honestly can’t rave about them enough. 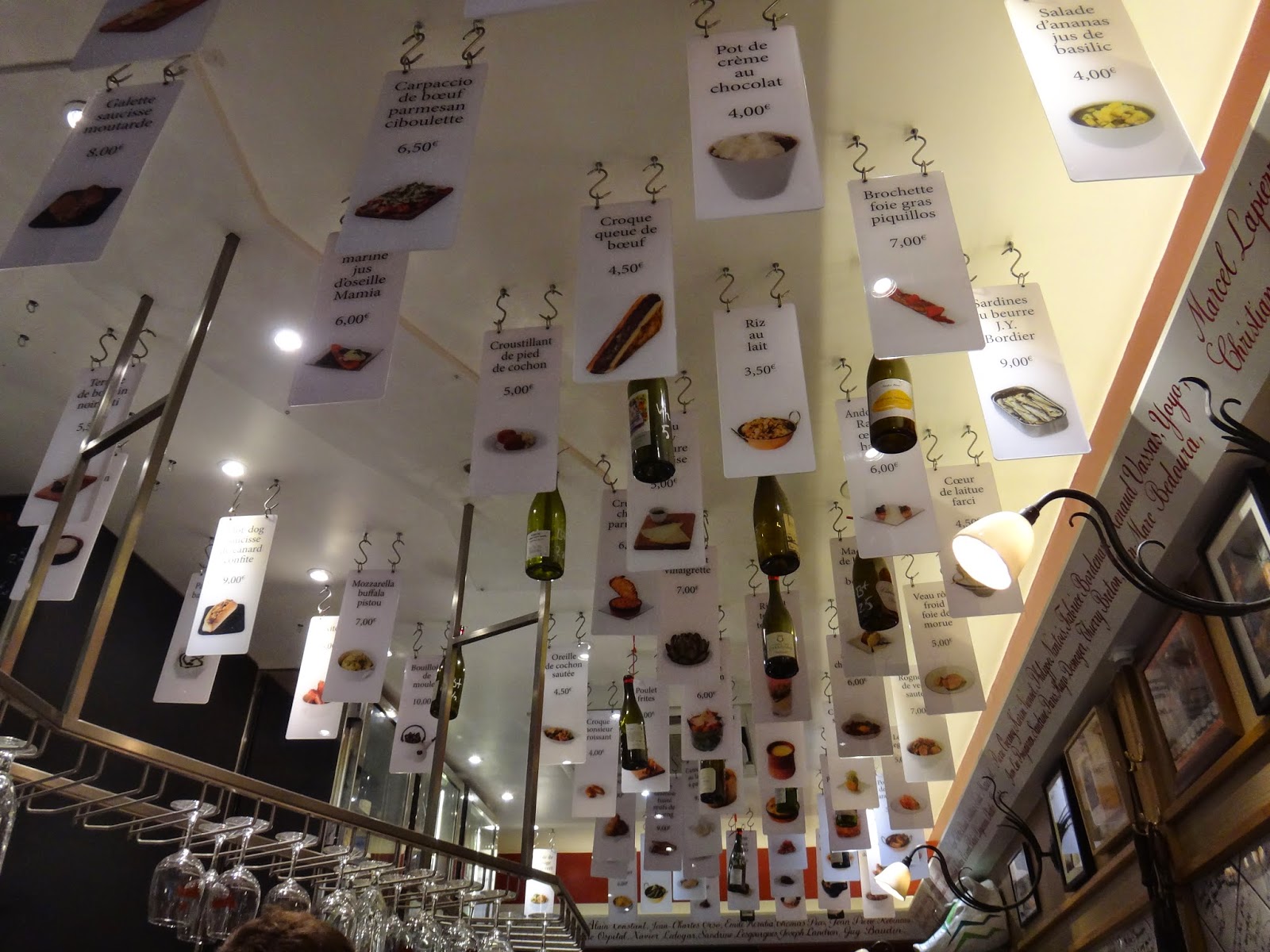 It’s standing room only at this tiny bar adjacent to the famous Le Comptoir du Relais, and there’s no English menu; or any menu, for that matter. Dish names and photos hang from the ceiling, so knowing some French would definitely be useful. We came here twice – once at dinner time and the second time at an odd hour (around 3pm), and the second visit was less crowded and frenzied, and definitely much more enjoyable. 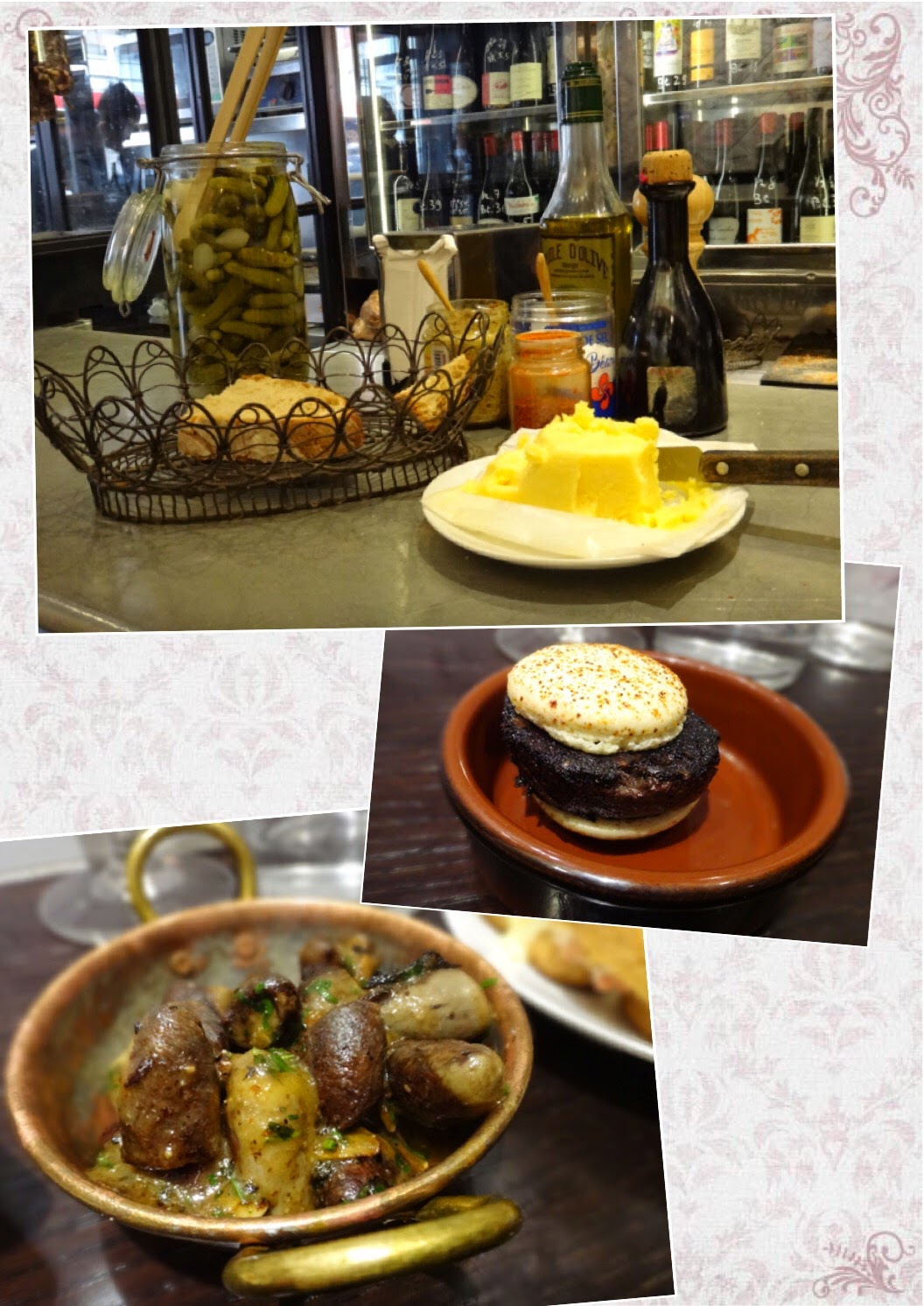 Almost everything here was delicious. There was a boudin noir macaron, sautéed chicken hearts, artichoke and parma ham waffle, and an amazing pork belly panini. There are also communal crocks of butter and cornichons on the bar counter, with free flow slices of bread for you to help yourselves. 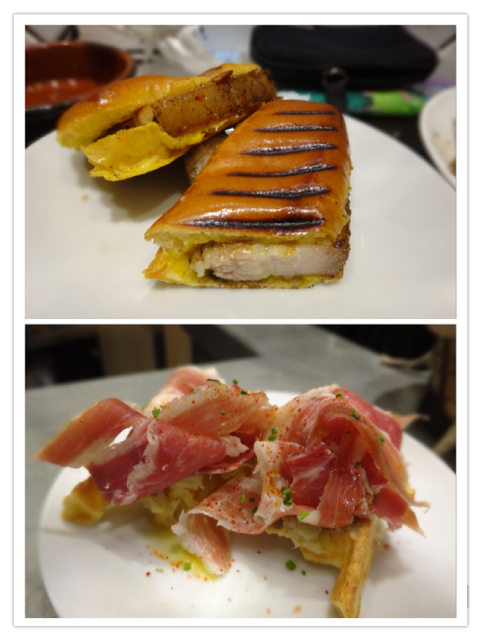 Even 2 visits wasn’t enough to try everything that we wanted. Next time, we’re staying in the Saint Germain de Pres area, and coming here for every meal. Well, almost.

Another bistronomie place, though not quite in the same league as Spring. Our experience may have been marred by the table of Asians next door, whose comments like “can you heat up the gazpacho” and “the meat is too pink” completely threw us off. 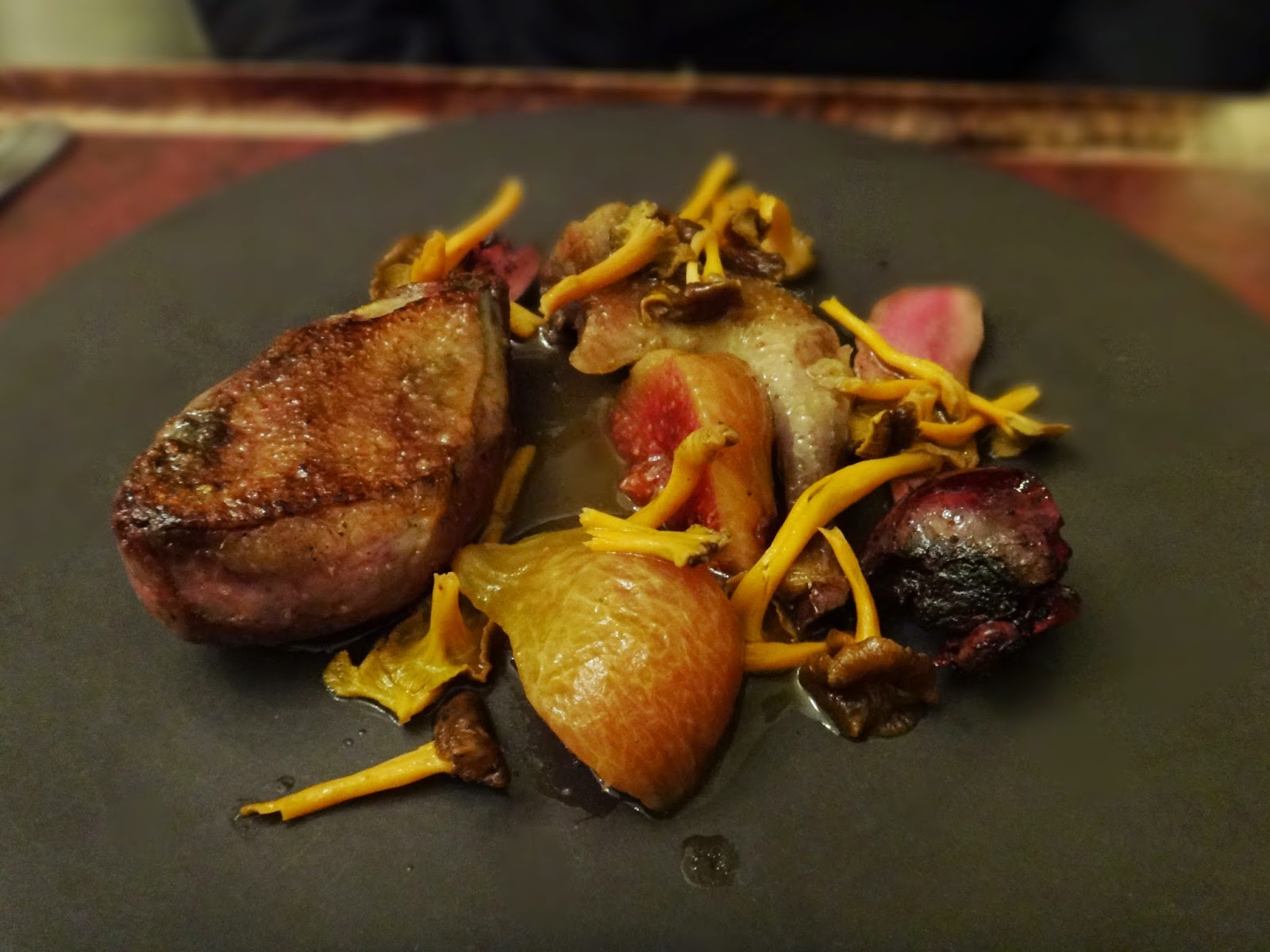 Still, the food was good, particularly the said pigeon, which was cooked perfectly rare, but the overall experience wasn’t as good as Spring.

Due to a mess up on the part of our hotel concierge (grrr…), we ended up here instead of its more modern sibling, Le 6 Paul Bert. Bistro Paul Bert is a more traditional French bistro, whereas Le 6 has more inventive fare. Slightly disappointing, but we still had a pretty good meal at Bistro Paul Bert. 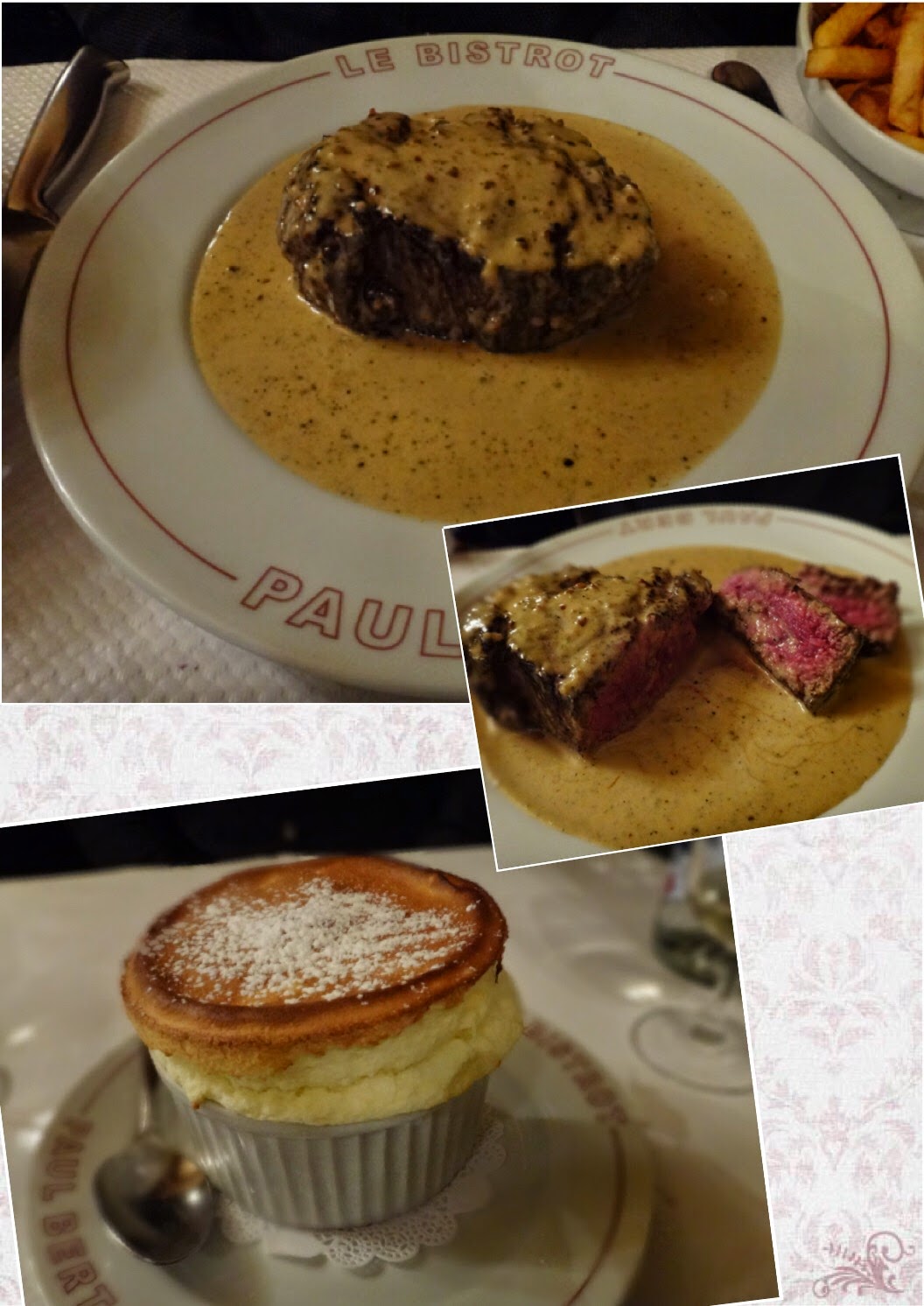 The seared tuna salad was really good, the steak au poivre was tasty, and we had a very good soufflé for dessert.

We had crepes and galettes aplenty, but out of all that we tried, including supposedly famous ones in the Montparnasse area, the best ones were at an unassuming place called Le Ble Noir, outside Versailles. 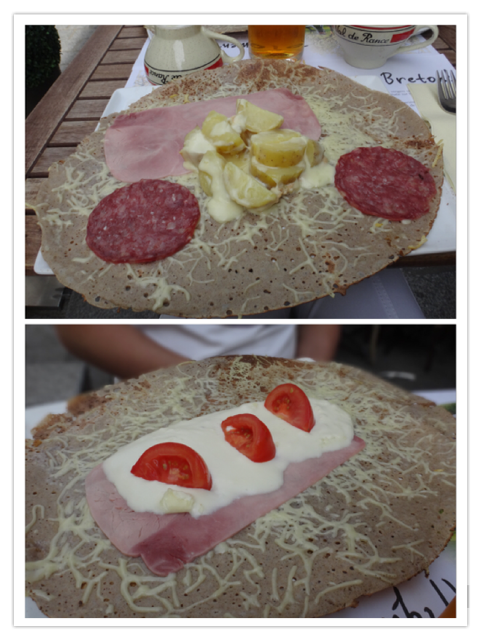 The galettes there are paper thin and super crisp, with just enough filling not to weigh it down.

This is a bit of a wild card entry. It’s a touristy chain, and the one we went to is along the Champs-Elysees, but I have to give them credit for some pretty darn good mussels. They have Bouchot mussels here, which are smaller and sweeter than regular mussels, which make all the difference. I don’t like the typical large mussels because I find them a bit overpowering and sometimes rubbery, but the tiny Bouchot ones are very easy to eat. 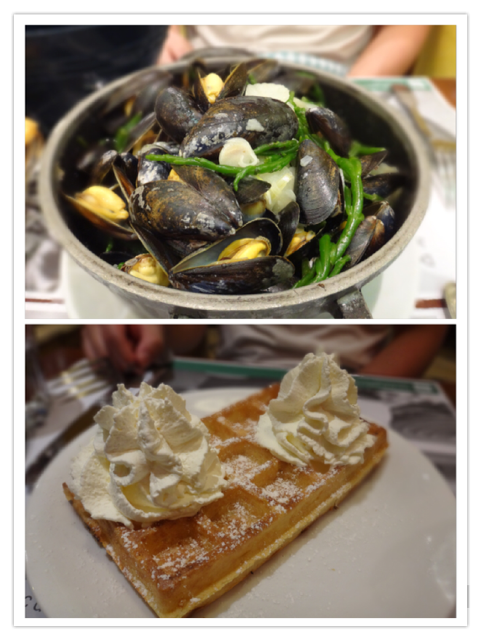 As if the quality of the mussels wasn’t surprising enough, we also had really good, light and fluffy waffles here. Old school, nothing fancy, but really satisfying.

There are lots of markets in Paris, but Marche Richard Lenoir, which runs on Sundays and Thursdays, is a foodie heaven. The makeshift market is set up along a street and runs for a few blocks, which makes for a very easy stroll up and down as you gawk at all the produce on sale. This is what I remember Borough Market being like… 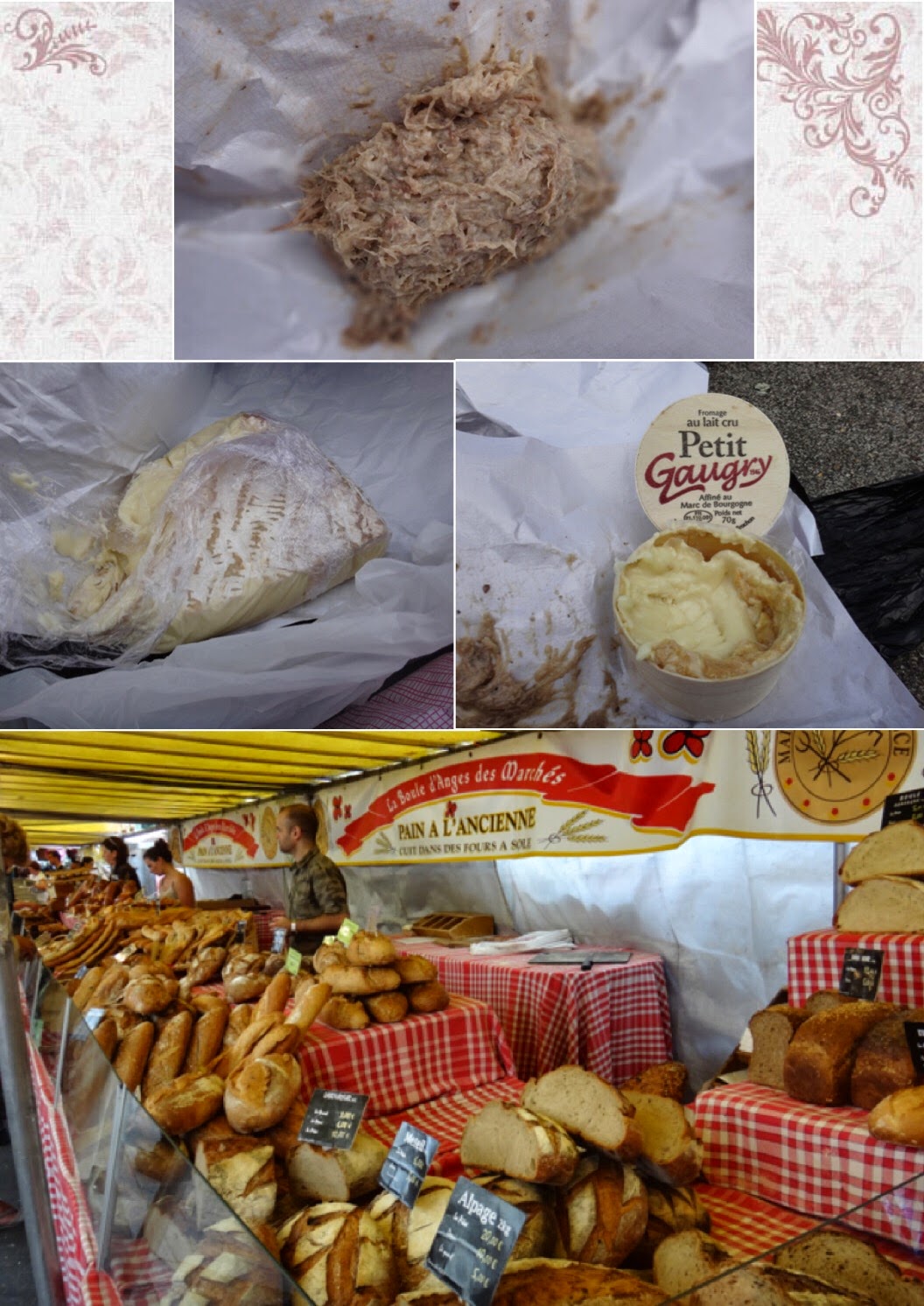 Besides fresh meats and produce, there are cheese and charcuterie stalls aplenty, as well as crepe stalls and some selling roast chickens. We bought a slab of duck and goose rillette, 2 cheeses (an Epoisses and a to-die-for Brie de Melun) and some bread, and had a thoroughly enjoyable picnic nearby.

The surprise of the trip was actually Leon de Bruxelles. This tourist trap actually had amazingly good food and waffles. We went back for more so that should be proof enough.

Posted by atetoomuch at 9:16 PM No comments:

This is a bit (ok, quite) late, but here are some of the highlights of our eats in London during our trip there in September 2014.

Possibly the best meal we had in London. When it first opened it was one of the hardest tables to get, but it’s been a couple of years, so I managed to get an online reservation for 6 pm on a weekday very easily.

Funnily enough, the things that we remember most about the meal are the awesome bread, the butter, and their olives – all were simple, unadorned and absolutely delicious. The meat course was also stunning – meltingly tender veal with a very light parmesan-flavoured broth.

We can’t afford, nor do we have the patience to get tables for, The Fat Duck, so Dinner by Heston was our way of having a Heston Blumenthal experience, minus the exorbitant cost or fuss. Yes, it was still fancy, but in a less intimidating way. Because we didn’t have very high expectations, we were very pleasantly surprised by the food and our overall experience. 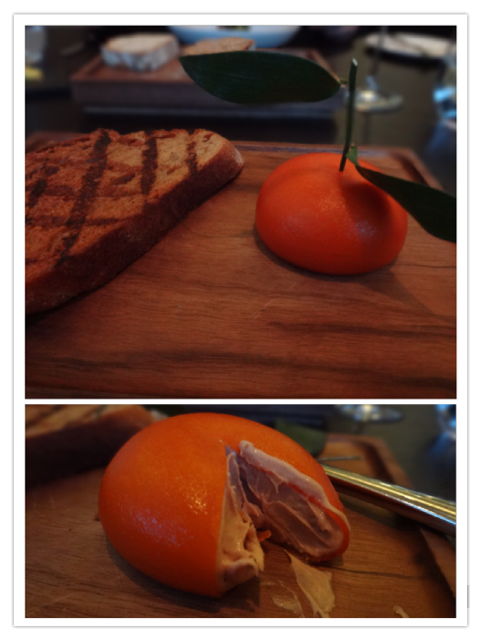 The signature meat fruit, where liver pate is made to look like fruit, is even more impressive up close, and still very tasty. 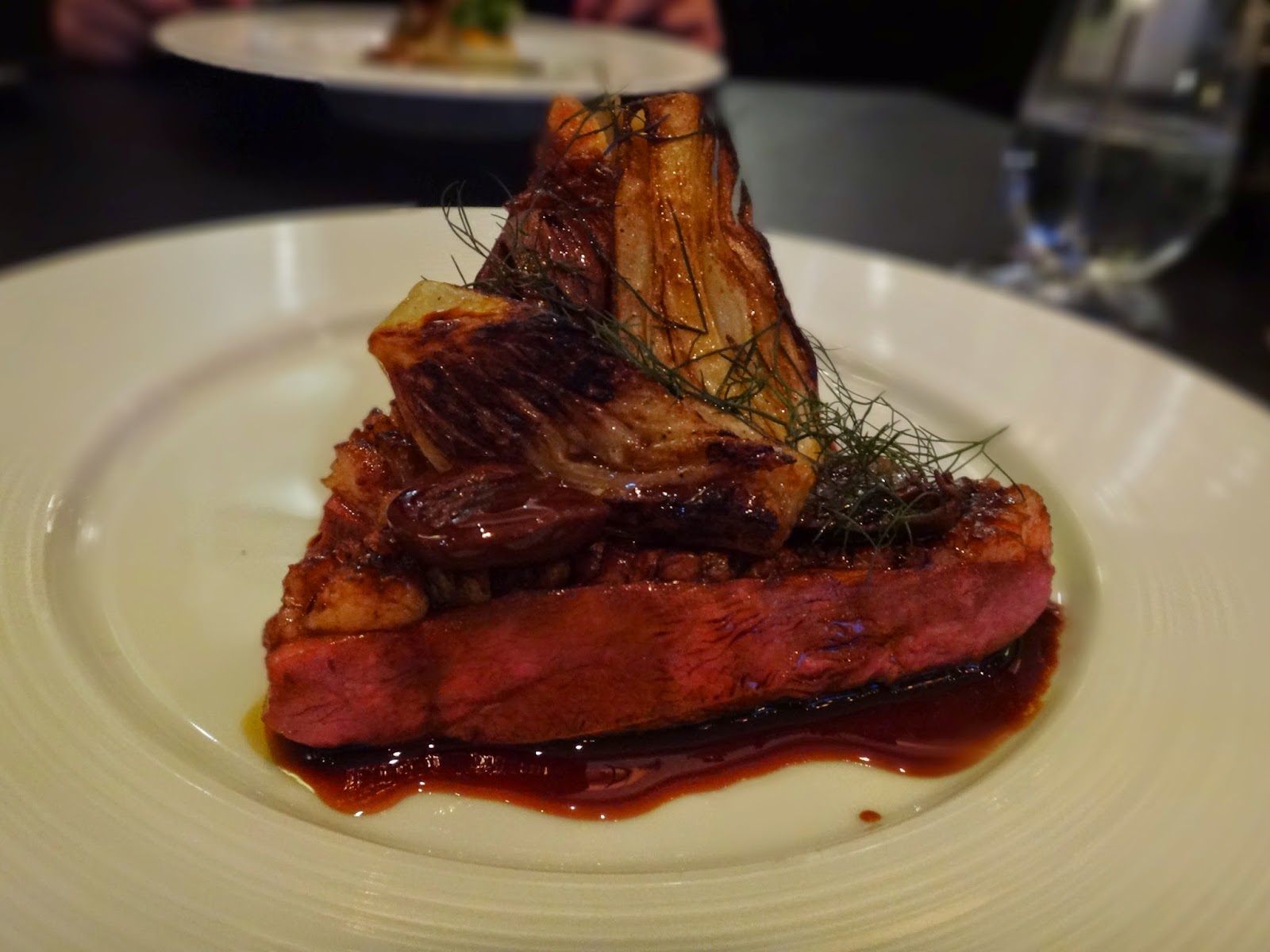 The roasted duck breast was outstanding, and one of the best duck dishes I’ve ever had. It was cooked perfectly, was still juicy and tender, and packed a ton of flavour. 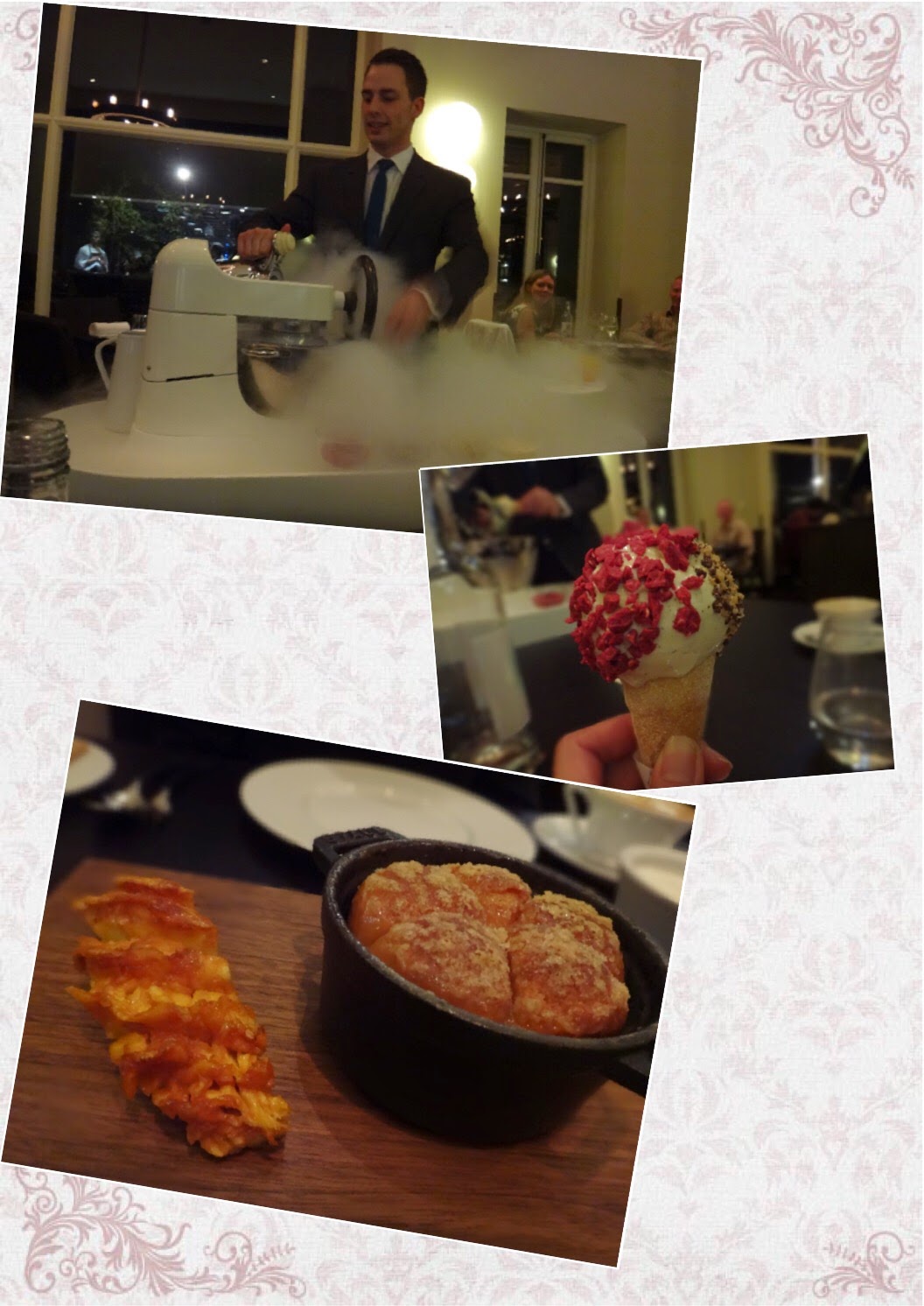 The upside down cake for dessert was also stunning, and for the experience was also ordered the liquid nitrogen ice cream, which was prepared tableside amidst much pomp and fanfare.

This seems like ‘the’ place to visit in London (besides Burger and Lobster which we didn't try). Maybe it’s because of the views, but we didn’t think it was worth all the hype. 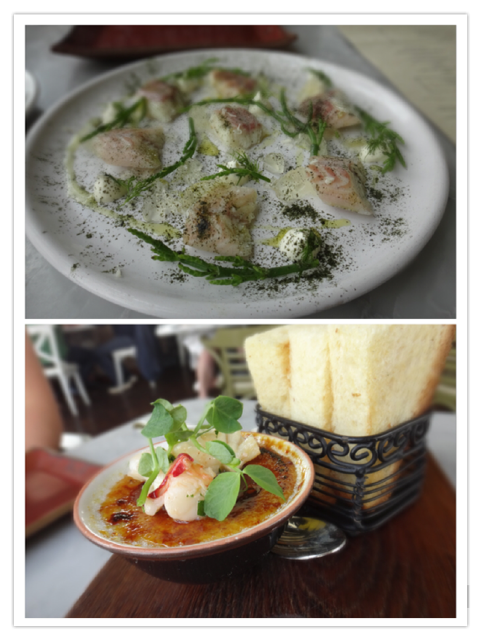 Some dishes, like the smoked eel with horseradish gelee and foie gras creme brulee were tasty but their actual waffle dishes were disappointing – the waffle was too thick and heavy compared to the rest of the dish.

The Wolseley is an institution, and quite the ladies who lunch/brunch place. Case in point – we actually spotted Gwyneth Paltrow at a nearby table! 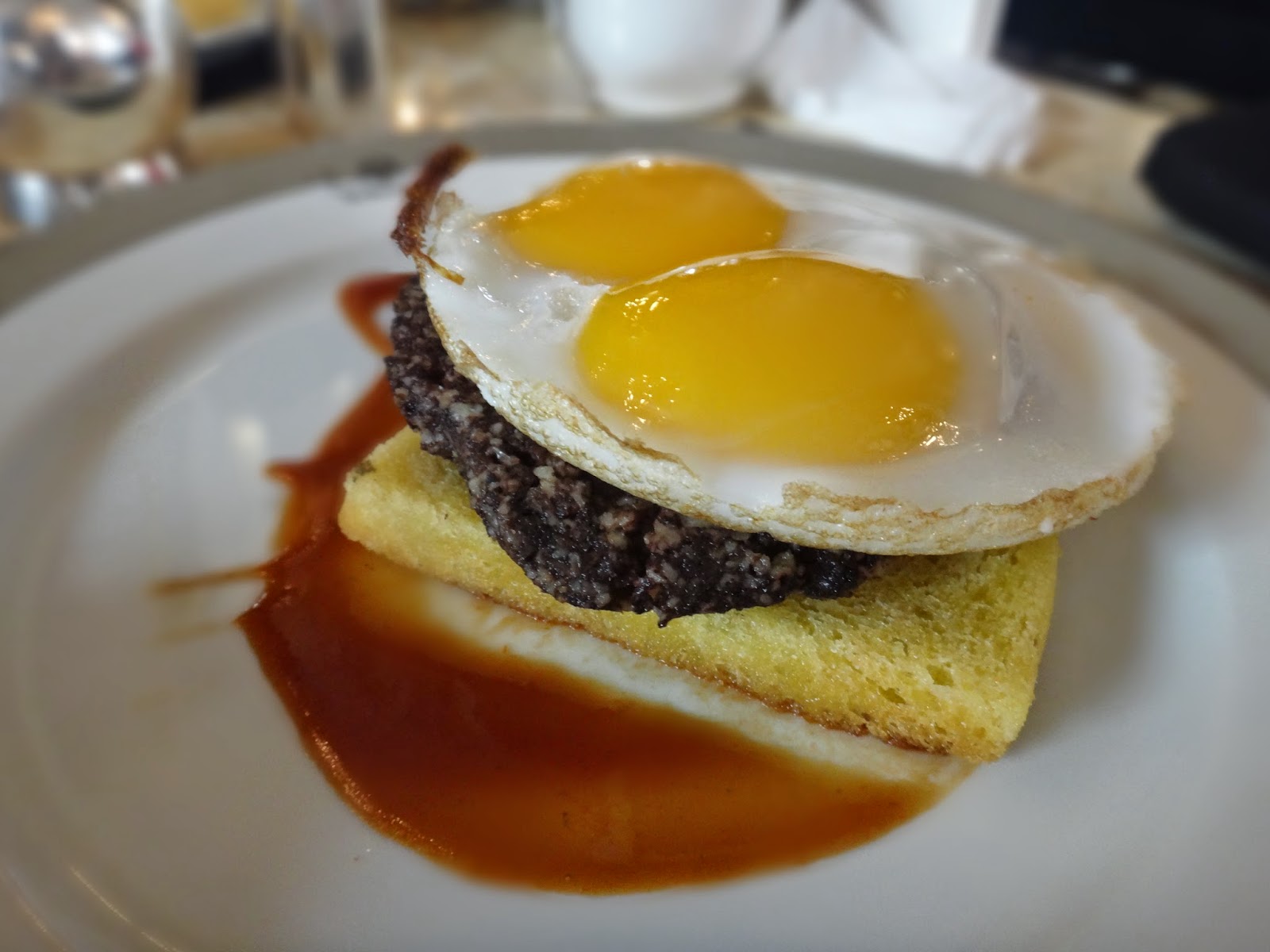 Food-wise, the only thing worth coming back for is the duck eggs with haggis, which to be fair, was very very good indeed.

If A had his way, practically every meal in London would be at Kensington Creperie. Because we didn't have that ‘luxury’, we went twice and loved every bit of both visits. 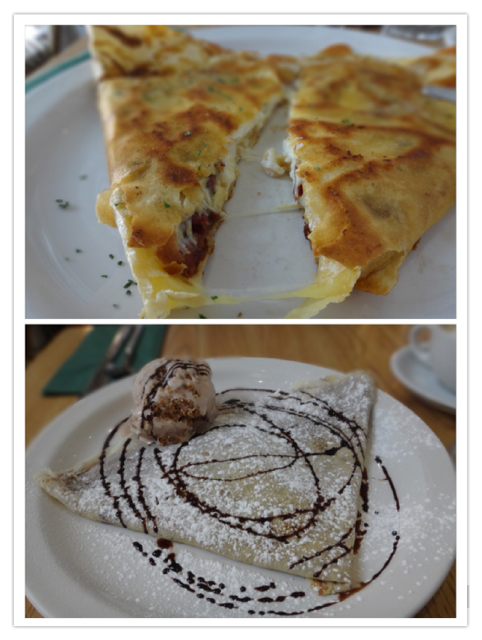 Their crepes are not for the faint hearted, unapologetically loaded with cream, cheese, butter and other diet disasters, but that’s what makes them so special, and so so good.

After we fell in love with Borough Market on our last trip back in 2008, we specifically planned our trip such that we’d be in London over 2 weekends, so that we could fit in 2 visits to Borough Market. Alas, it’s gotten so touristy and so crowded that it's just too manic an experience now.

Going early helps, but then that means some of the food vendors aren’t open yet. Go later and the crowds are just insane. You can’t really saunter around sampling each stall’s wares because crowds can be 3 people deep, and even after buying your food, it’s a challenge finding an empty place to sit down and eat. Will we go back? I’m not sure. Maybe, but it’s certainly no longer worth planning our trip around it.

Dinner by Heston was interesting (as expected) and not astronomically priced. Definitely worth a visit. But for "fine" dining, the food at Dabbous was better overall.

Oh, and Borough Market has become so touristy that I'd just skip it next time.

Posted by atetoomuch at 8:16 PM No comments: