I’m not quite sure how we ended up at Domani, which occupies what used to be Pasta Cafe at B2 of Ngee Ann City. It was our second consecutive day at Takashimaya, so I guess we just wanted to have something simple yet marginally interesting. Well, interesting it certainly was. The menu is billed as Spanish/Italian, but I would go further to say that it’s a Singaporean interpretation of Spanish/Italian, so don’t expect too much authenticity.

Their tapas were quite disappointing, since they were more like generic deep fried appetizers that you can get just about anywhere – think deep fried calamari, deep fried soft shell crab, deep fried chicken, fries, potato croquettes and even potato salad. We chose the most interesting thing, which was a platter of bruschetta. 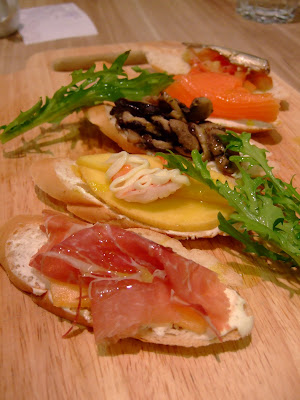 The platter came with one each of their 5 bruschetta offerings – smoked salmon with cream cheese, mixed mushrooms, parma ham and melon, prawn and mango, and sardine with chopped tomato. These were ok but not very outstanding, and I found it a bit disconcerting that all 5 of them were spread with cream cheese. 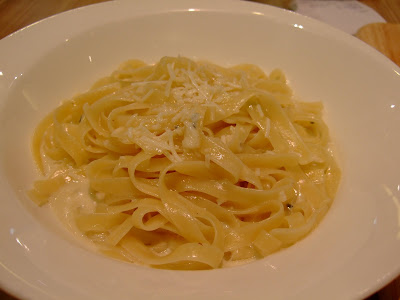 The photos of the paellas looked like ordinary fried rice, without the signature slightly burnt crust, so we decided to go with some safe-looking and sounding pastas instead. A had the four cheese tagliatelle, which was like any other cheesy cream sauce with just the slightest hint of gorgonzola. 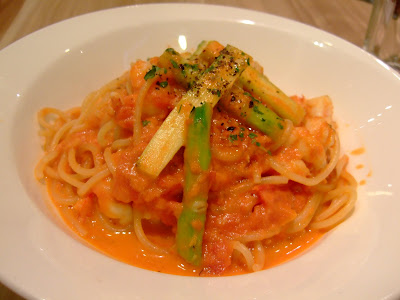 My prawn and aspagarus spaghetti with tomato cream sauce fared only slightly better. It definitely needed the chilli flakes and powdered parmesan cheese that I liberally sprinkled on it; even then, it was quite ordinary and in my opinion, not quite worth $15.90.

We were about to dismiss this place since it was similar to Saizeriya, but without the jaw-droppingly low prices that justify dining there despite the uninspired food. But then, the dessert arrived… They have a tie-in with Rive Gauche patisserie so you can order Rive Gauche’s cakes for dessert, but we went with their home-made Double Chocolate Chiffon Cake instead. 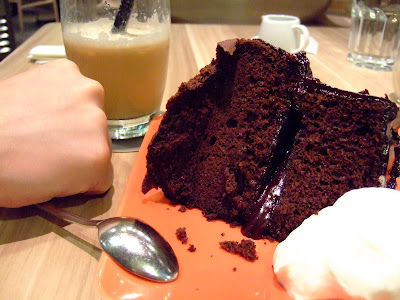 Wow. This was a massive cake – we added A’s hand in the photo to give some perspective on the size. It wasn’t pretty – the icing was just slathered on and the slice was ragged and uneven, but this was better than so many of the multiple layer, doorstop chocolate cakes at some of the finer cafes around. Those jolt you with their size, but are often very heavy and dry. This, on the other hand, is an old school delight. The cake is really light chiffon but still quite chocolatey, and the icing is pretty good fudge. It’s served warm, with a sweetened whipped cream that pairs very well with the cake, since ice cream would probably overwhelm the super-light cake.

So would we recommend this place? Probably not for the food, but most definitely for the cake. I would happily eat somewhere else in Ngee Ann City, and save some space for the cake here.

This would be perfect for students and young execs. I’d definitely have brought C here for dates. haha

The standouts are the bruschetta (for the price) and the desserts (great, no matter what the price).

The coffee’s not bad too.

Another potential entry for Best of 2010! About bloody time too, it’s already September. Part of the Garibaldi group, Gattopardo is an Italian restaurant specialising in seafood. It’s located at what used to be The Legends at Fort Canning Park, which is currently undergoing renovations to turn it into a hotel. The restaurant itself is located in a remarkably large space, with lots of private rooms and ample space for parties. This also means that unless they’re extremely busy, you can usually get a table at fairly short notice. 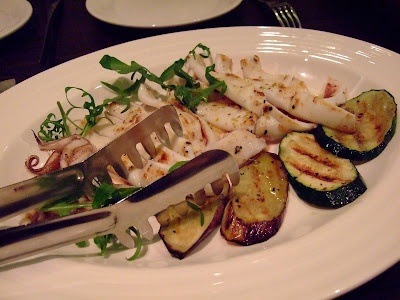 In addition to their a la carte menu, they also have seafood flown in daily which you can select from a glass counter in the middle of the restaurant. We decided that on our first visit, we should make the most of their seafood expertise. To start with, we selected calamari from the glass counter and got them to grill it, with olive oil and lemon juice. This was very tender and sweet, but I think I expected a little more flavour from the squid. 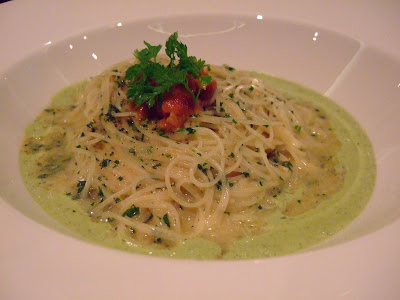 There was a huge array of pastas on the menu that were calling to me, so we decided to share one as a second starter. We had the angel hair pasta with bottarga and sea urchin. This was good – it didn’t have the Asian twist that the one at Oso did, but at the same time I didn’t expect the liberal dose of herbs in the sauce that made it almost pesto-like. 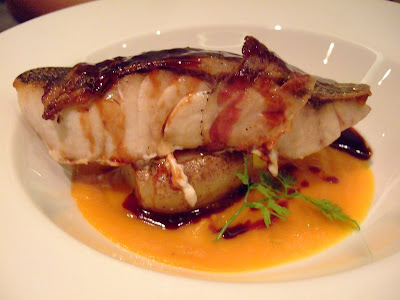 For our mains, A had the Baked Garoupa with Cured Pancetta and Red wine sauce. This came perched on top of a boiled potato and some sort of pumpkin puree. The fish was very fresh and very flavourful, and perfectly cooked. I did find the pumpkin puree a tad too sweet though, but overall this was a very good dish. 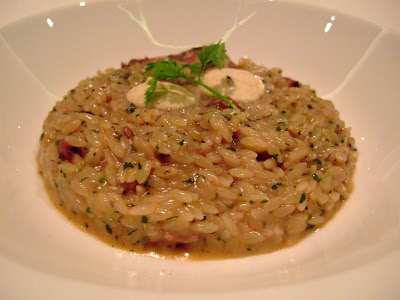 I had the Risone with Braised Octopus and Bone Marrow. Risone is a rice-shaped pasta that looks like risotto but is a pasta instead of rice. This was really good and surprisingly not very jelak at all, compared to risotto. It had a very interesting texture – al dente yet still smooth, and the flavour of the sauce was amazing. The slices of octopus were also very tender. An excellent dish. 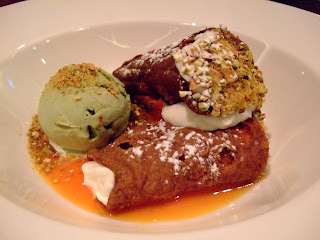 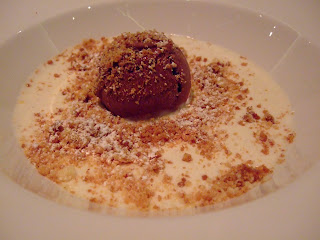 Their dishes are all pretty light and well-portioned, so we had room for dessert. A had the Cannoli, which was filled with a sweet ricotta cream and served with a pistachio ice cream, and I had the Crumbled Shortbread with Citrus Cream and Chocolate Sorbet. Both were very interesting and refreshing departures from normal Italian desserts, but if I had to pick the better one it would be the Shortbread.

Service is excellent – knowledgeable waiters who are keen to recommend but aren’t at all pushy. I would definitely recommend this place, and I also can’t wait to return for more pastas and some of their interesting-sounding pizzas.

Great! It’s got the perfect fancy but not too poncy atmosphere. The service is fantastic, although it does get a tad slow when your section is full. And the desserts are some of the most inventive and original I’ve had in an Italian restaurant.

Overall, a definite contender for the best new find of 2010.

Note to self: Skip the coffee. It was a lot stronger than I expected it to be, and it kept me up till 3 am.

Mooncake season is upon us again, and it’s that time of the year when I brace myself for a season of excessive calorie consumption. Because they’re so ridiculously calorie-laden, I try to limit myself to just one ‘brand’ of baked mooncakes each year, and one snowskin. For the past few years, it’s been half a box of the Raffles Hotel Mother of Pearl mooncake with single yolk and white lotus paste (I share a box with my brother), and for my snowskin quota, the Szechuan Court assortment (2 each of 4 varieties they have each year).

Alas, after I placed my early bird orders (to take advantage of various credit card discounts), I discovered that Jewels Artisan Chocolates was making a salt caramel truffle snowskin mooncake this year! Finally! Just when I was lamenting that someone should take on this very logical flavour – after all, most mooncakes are based on a sweet-salty pairing, what with lotus paste and salted egg yolk. Of course, I expected Canele to be the ones to step up, but I was more than eager to give Jewels a try. 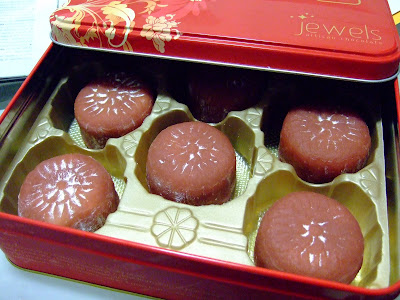 For my first few bites, I had some reservations. It was my first mooncake of the season, and I was comparing it to the memory of last year’s. I thought that while the salt caramel chocolate truffle was excellent (they are chocolatiers, after all), I somehow felt that the lotus paste and the snowskin paled in comparison to some of the more established mooncake makers.

However, after trying Szechuan Court’s this year, I’m actually changing my mind. Their snowskin isn’t as thin and fine as I remember, so after sampling both this year, my vote actually goes to Jewels. The snowskin is so thin that it's almost translucent, and while I’m not the most keen on the melon seed slivers within the lotus paste, overall I really like the combination of the salt caramel truffle with the lotus paste. And most importantly, kudos to them for not being timid with the salt – there’s nothing I hate more than hesitancy and reservation when creating a salty caramel. 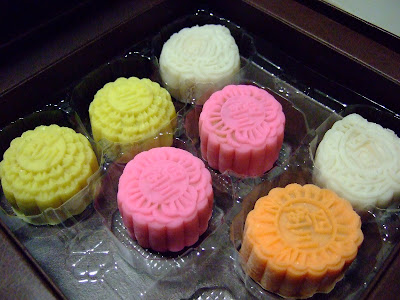 This year, Szechuan Court’s 4 flavours are Baileys, Rum and Raisin, Champagne and, the new flavour this year, Organic Muesli. They were a tad disappointing this year, though I must say they’re not shy with the alcohol for the truffles. If you like your chocolate truffles with a good dose of booze, then these are the ones for you. Otherwise, the only one that I like this year is the Rum and Raisin. I may have to rethink them as my default snowskin choice in future. Of course, mooncake season isn’t complete without the traditional baked variety, and in my opinion the best one in town is Raffles Hotel’s Baked Mother of Pearl Mooncake with Single Yolk and White Lotus Paste. The skin is really thin and moist, not dry and crumbly, and the filling is extremely fine, probably due to the pearl powder mixed into the paste that gives it its name and signature texture.

I think mooncakes are way overpriced. Pass.
Posted by atetoomuch at 10:49 PM No comments: