A’s cousin L recommended this place to us, and we managed to catch the tail-end of a very good Citibank promotion when we went on Tuesday. 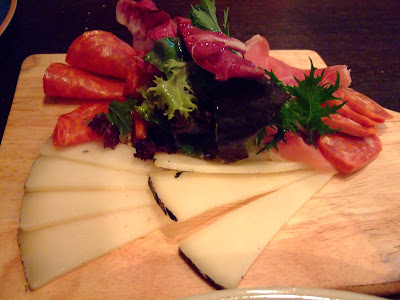 We ordered a selection of Spanish hams, sausages and cheeses. This was quite a disappointment, maybe because we’d just been spoiled by the quality of produce in Vancouver’s Granville Island Public Market (more on that in our upcoming holiday post). The cured meats here didn’t have much flavour and were quite chewy, and the cheeses were quite basic as well. 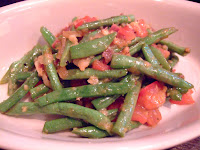 It got much better after that, though. The smoked salmon roll with cream cheese and lettuce was wrapped in an omelette instead of a typical tortilla or spring roll-esque wrapper and was very interesting. The grilled scallops with bacon bits and chicken wings with tomato, chilli and garlic sauce were both pretty good. The wings came with an optional spicy dip that packed a good punch. The sautéed green beans with Serrano ham were an unexpected hit. The beans were crisp and tender, and the ham added a subtle smoky flavour to the dish. 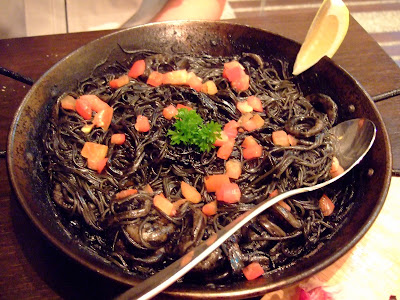 We thought we’d have to order more cos the dishes were all pretty small, but then the Spanish pasta with squid ink arrived, and the small portion we ordered was already quite substantial. The pasta was possibly even thinner than angel hair pasta, and absorbed every bit of squid ink flavour. I liked that it wasn’t too heavy or oily, just very intensely flavourful.

Without the 50% off promotion, this place isn’t all that cheap. They do have an a la carte buffet Sunday brunch, but that doesn’t cover the entire menu, just a selection of 20 tapas. Still, at $33, or $48 with free flow sangria, it sounds like a pretty good deal and we’re definitely planning to check it out one Sunday.

The service is superb. The food is above average. It’s not cheap but really not crazy expensive either. We’ll be back.

On the day that we left for our trip, we decided to have something light and Asian for lunch, what with the prospect of lots of Western cuisine on our trip. We ended up at Qun Zhong Eating House, also ‘affectionately’ known as the Dumpling Nazi because of the owner’s apparently gruff manner.

Pass by here either during lunch hour or in the evenings and you’re likely to see a snaking queue outside the tiny no-frills shophouse. We got there at 11.30 before the crowds formed so we managed to get a table immediately.

We ordered the la mian with minced pork (zha jiang mian), la mian soup with sliced pork and Szechuan vegetable, and an order of xiao long bao. There was a slight miscommunication and we ended up also getting an order of the vegetarian dumpling, but luckily portions are pretty small and we managed to finish it all.

The thickness and texture of the noodles here are unlike any la mian that I’ve tried here. They’re quite thick but still pretty light. The sauce of the zha jiang mian was good, but I really like the tasty simplicity of the soup one. That’s my version of comfort food and I could probably eat that every day.

For something that I’d never voluntarily order, the vegetarian dumplings weren’t too bad. The xiao long bao were again quite different from the ones at Crystal Jade or Din Tai Fung. The skin was very thin, and the dumplings were absolutely loaded with broth. Kudos to them for being able to achieve that, but purely taste-wise I think I actually prefer the ones at Din Tai Fung.

All in all, the food isn’t too bad but definitely not worth waiting in line for. I wouldn’t mind going back but only if we happen to be in the area and there’s a table available.

The service isn’t great but it isn’t as bad as I thought it would be. The food’s not bad with some interesting things on the menu. Still, I probably wouldn’t line up for it.

I’m not quite sure how we found ourselves at Prima Taste in Centrepoint; I think it was more a process of elimination because we didn't feel like any of the other outlets there. After perusing the menu, I ended up being drawn to the promotional item – Laksa Seafood Porridge, served piping hot in a claypot. 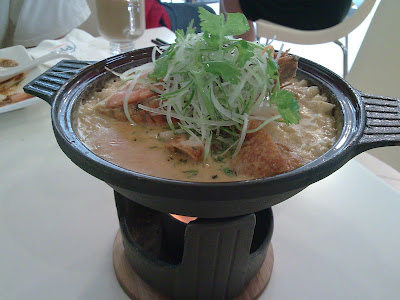 Actually, this is more like mui fun than porridge. I really enjoyed it because when you think about it, what’s there not to like? Seafood (prawns, crayfish, clams, scallops), bamboo shoot, shredded cucumber, laksa gravy, and rice instead of noodles. Perfect for those who are paranoid about laksa stains on their clothes.

Surprisingly, laksa fan A didn't like it. He thought the rice tainted the flavour of the laksa gravy. I didn't think so, but I must agree that the rice tends to absorb quite a bit of the gravy after a while. 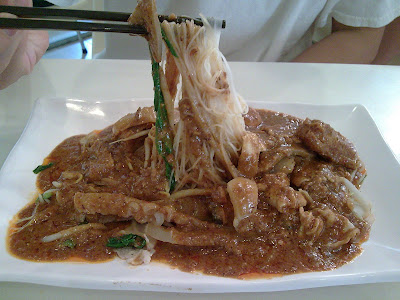 A initially wanted the Laksa Yong Tau Foo, but because I ordered the Laksa Porridge, he had the Satay Beehoon instead, after being tempted by the table next door. I really don't like Satay Beehoon so I can’t really comment on this.

Anyway, this is the last post from atetoomuch for a few weeks while we’re off on vacation! We’ll bring you highlights of our eating exploits in Vancouver and Las Vegas when we return.

Service was surprisingly good. Although when we got home and C checked the receipt, we found we were charged for the chin chow that was supposed to come free with the laksa porridge.

Taste-wise, it’s good, but not great. I’d say this place is alright but really not a destination.

We decided to make a repeat visit to Verve for dinner tonight, since we weren’t in a particularly adventurous mood and wanted something quite fuss-free. For starters we tried their fried calamari, which came with a garlic cream sauce, and their smoked cheese wrapped with proscuitto. 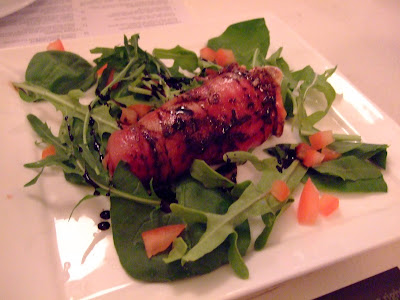 This wasn’t as oozy as the one from Valentino or even Pietrasantra; I guess it's because they use a different cheese. The one here uses a smoked cheese that’s quite hard, so it was more chewy, and also quite salty from the combination of smoked cheese and proscuitto. 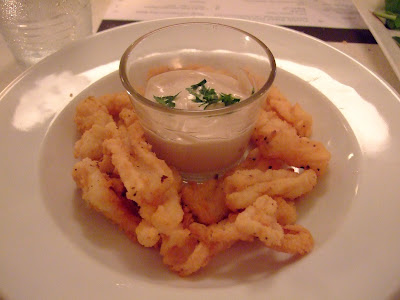 I thought the calamari fared much better, though A wasn’t as enamoured. The calamari was quite tender, and I really liked how crispy it was without being oily. The garlic dip was a bit overwhelming but ok in small doses.

A decided to be boring and ordered the exact same thing as the last time – linguine tossed in olive oil with sundried tomatoes and shaved parmesan. The last time we came here this was a special, but it’s since been included as a permanent menu item. 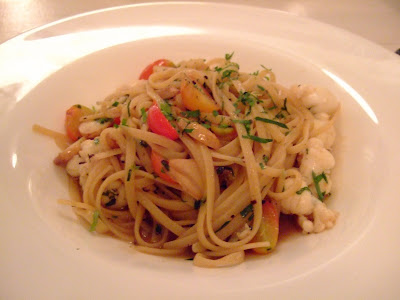 I decided to try the slipper lobster linguine with cherry tomatoes in white wine and lobster broth. It was a big plus that the lobster came deshelled. However, I found the sauce to be a bit too subtle. I couldn’t discern much white wine nor lobster broth, and as a result the cherry tomatoes all but overwhelmed the flavour. This is good if you want something very light, but I much prefer the duck confit pasta I had the last time.

There are still a few more pastas on the menu that I’d like to try before deciding if they’re a one (or two) hit wonder. As it stands though, I don’t think Verve will take the place of Pasta Brava as our dependable Italian option (when we can't get a reservation at Valentino’s).

Generally, I’d recommend this for a nice, simple Italian meal. Just don’t expect the food to blow you away.