This stall in Lau Pa Sat, which is a franchise of a Filipino burger chain, has been in the press of late, thanks to a number of articles featuring ‘belt-tightening’ options of favourite dishes. A was working late one night so we decided to drop by for a quick dinner before heading home.

Turned out to be not so quick, because depending on what you order, the burgers are prepared fresh so you may have to wait almost ten minutes, which we did for the Lamburghini. Yes, that’s the name of their lamb burger… 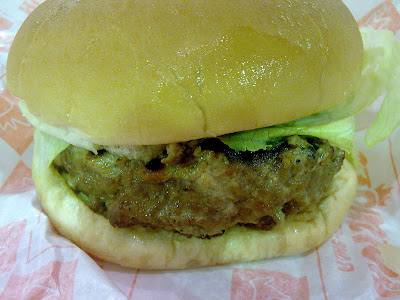 Because of the extremely misleading description (“2/3 pound lamb patty”), we initially ordered just one to share, cos we figured at $8 and for a 2/3 pound patty, it may well end up quite huge. The real thing was nothing like we imagined, and no way was it a 2/3 pound patty either. It ended up no bigger than a Mac’s Double Cheeseburger; definitely not worth $8, but I must say it was quite tasty. The patty was juicy, quite salty and very fragrant. It would have been a bit overpowering if not for the cool mint yogurt that topped the patty. 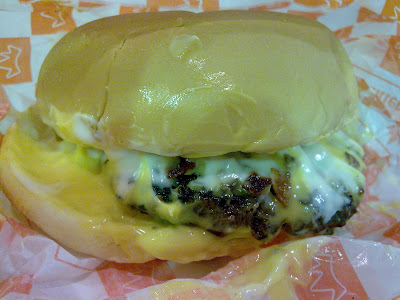 Clearly one burger wasn’t enough for the both of us, so we ordered the Crispy Burger Melt, which was a “quarter pound patty” (again I have my doubts), bacon bits, cheese sauce and mayo. At $5, this was slightly more worthwhile, but after a few bites you notice where they cut corners. Sure, the patty is probably of decent quality, but the bacon is in the form of bacon bits, not real strips of bacon, and the cheese isn’t slices of cheese but rather cheese sauce (a bit like Cheez-Whiz). While a combination of synthetic cheese, mayonnaise and bacon bits can hardly go wrong, I can’t help but feel a bit shortchanged at the many shortcuts that are taken.

Still, with opening hours up to 11 pm on weekdays, this is a pretty decent choice if you’re in the area and working late. Just bear in mind that it certainly isn’t the healthiest option, and contrary to how it’s being portrayed in the press, it’s not all that cheap either for what you get.

The Lamburghini is not worth $8 (although some might argue Relish’s burgers are not worth $18+ too). Maybe it’s just cause it’s a food court stall and there are plenty of cheaper alternatives around.

Anyway, the staff are friendly and the burgers taste good so I’d be happy to come back for the $5+ ones.