I'm pretty disillusioned with beef at the moment. From the somewhat lacklustre burger that we had at Morton's recently, to a surprisingly flavourless Florentine steak at Bistecca, it all seems to lack a beefy flavour, or any flavour really, that sets it apart from any other meat.

Bistecca is known for its Florentine steak - a T-bone cut that comprises the striploin on one end and the tenderloin on the other. For 2 persons a single cut will suffice. We were there with W and M so we shared a double cut Florentine.

The Flintstonian-sized behemoth definitely made an impact when they presented it to us. Sizzling and almost black, we eagerly awaited its return while they took it away for slicing.

Unfortunately, because it was so thick, the ratio of the outside char to the rare steak was disproportionate. Once you get past the admittedly yummy charred exterior, the meat itself tasted oddly of nothing much. Just almost raw meat without much flavour at all. It was only saved by fairly aggressively salting the meat at the table.

W and M, who've had the single cut on previous occasions, assure me that it's usually much better. I assume that the double cut is simply too thick to get the balance right, especially when the meat itself doesn't have much flavour on its own. A better option would probably be to order 2 single cuts next time, the Florentine and a bone-in ribeye to share. We'll reserve judgment till we do.

It's pretty good, but even considering that the price is pretty standard for good steak places, I don't think it's worth it.

Madam Kwan's, a popular Malaysian nasi lemak chain, has opened its first overseas outlet in Vivocity. We ended up there because the queue outside Jamie's Italian was too long, even on a Monday night. We had read a number of reviews of Madam Kwan's, mainly in respect of how overpriced the Singapore outpost is compared to its equivalent in Malaysia, but we decided to see for ourselves.

The restaurant is pretty huge, and acoustics are terrible. Forget about trying to conduct any sort of conversation with your dining companion - you have to yell to hear and be heard over the incredible din. Despite many waiters running around, they are far from a well-oiled machine. I think it took us over 5 minutes just to catch someone's attention to take our order. 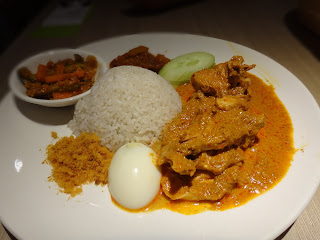 The nasi lemak was passable, though the rice wasn't coconutty enough for A. The otak was very good though, and the additional chicken curry that we ordered had a very tasty gravy; pity that the chicken itself was really dry and overcooked. 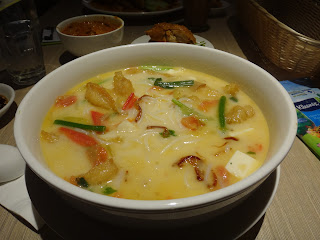 I decided to try the fried fish noodle soup. This was ok, but at twice the price of the one at Central and not nearly as good, definitely not something I'll order again.

Unfortunately all the reviews are spot-on. The food here is way overpriced given the quality. Service is almost non-existent, and they have the gall to charge $1 for water. Given the plethora of dining options available in Vivo, I'll be surprised if they last more than 2 years (I'd say a year but I assume most leases are for 2 years...).

Posted by atetoomuch at 10:17 PM No comments:

We have a new default choice at Star Vista - Central, a cha chan teng that also has/had branches at Vivocity and Ngee Ann City. For some reason, I think the turnover is pretty high; we've never had to wait in line for more than 5 minutes. 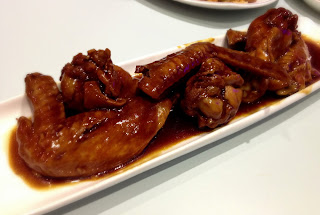 The menu is quite comprehensive, though some of the items may not be very well described. A side of Swiss chicken wings, for example, turned out to be soya sauce braised wings, rather than something Western/with cheese, like the name suggests. 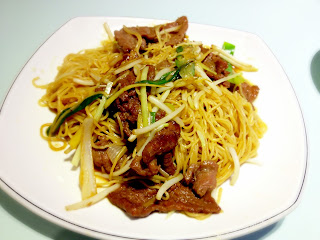 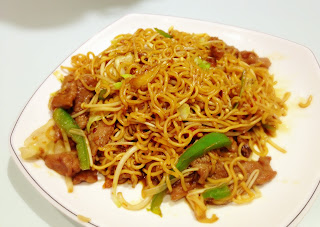 Their noodle dishes are very good; better than the rice ones. Over a few visits we've tried their Hong Kong noodles with beef, ginger and scallions, and the fried instant noodles with beef and XO sauce. Both were surprisingly full of flavour, with the noodles absorbing lots of flavour from the respective sauces. 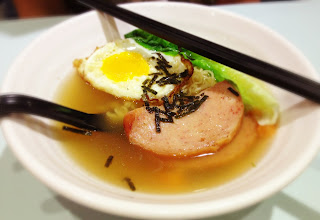 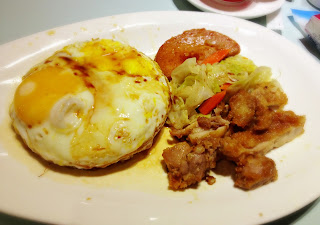 The instant noodle soup with luncheon meat and egg was a bit more ordinary in comparison, as was the rice with fried chicken (which replaced the crispy duck which they ran out of). Still quite decent but paled in comparison to the noodles. 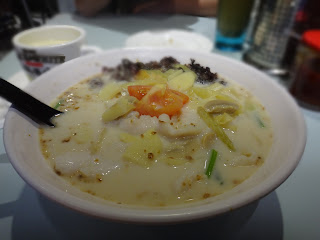 My favourite dish by far, though, is the sliced fish noodle soup. For $7.50, you get a huge bowl with lots of salted vegetables, bee hoon and generous slices of perfectly cooked fish in a tasty milky broth. I've always loved this dish, and the version here is one of my new favourites.

One major reason we're coming here more often is that their drinks are way, way better than both Papparich and Owl Cafe.

Cheap and good (for the price). I approve.

Supper at The Naked Finn

We finally made it to Naked Finn one Saturday night for their supper menu - namely, their gourmet version of prawn noodle soup. Tip: If you come maybe 5 to 10 minutes before supper service, you may be able to snag last orders off the regular menu too, hence the best of both worlds.

A had a serving of the chilled beehoon, which was as good as we remembered, but the star was definitely the prawn noodle soup. Prices start at $28 for a bowl of bee hoon soup with kang kong, slices of charred Iberico secreto, and 3 grilled banana prawns. Prices increase if you opt for giant tiger prawns or other exotic prawn varieties. I was mainly there for the soup rather than the accompanying prawns, so I went with the basic banana prawns. 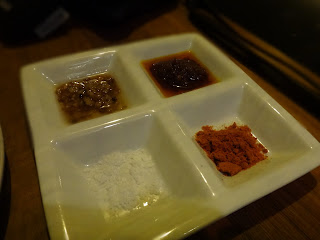 You can read in detail how they painstakingly prepare their prawn noodle soup here - in summary, fried prawns are simmered in a pork stock for seven hours to form the broth, with no sugar, salt or MSG added. It is then served unseasoned, with an array of condiments (chilli powder, rock salt, a sweet onion sambal and Iberico pork lard) for each diner to adjust to their own preference. 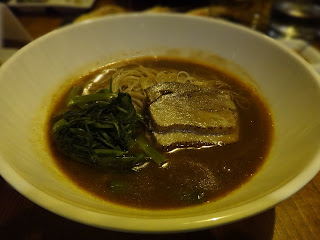 This was, without question, the richest, most intensely flavourful bowl of prawn noodle soup I've ever had. Granted, at $28 it was also the most decadent and luxurious, but if you equate this to a prawn/lobster bisque soup rather than a hawker centre-style prawn noodle (the soup certainly resembles the former rather than the latter, in its flavour as well as consistency), it's not as astronomical as it initially appears. 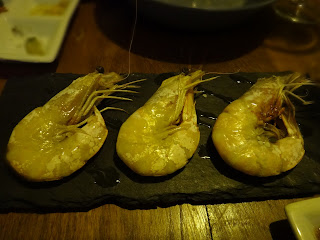 The grilled prawns, which to me are almost secondary, had a very complex, almost blue cheese flavour, particularly around the head/brains. If the basic banana prawns were this good, I wonder how the higher end prawns will be.

This is officially the best late night comfort food ever. If I'm ever having a particularly bad day, a bowl of this will certainly cheer me up in no time.

After recently hitting a series of meals which were pricey for what you got and totally not worth it, this place has bucked the trend.

Yes, it's expensive. But yes, it's totally worth it.

A belated birthday dinner with the gang saw us going back to Il Lido in Sentosa after a few years (I think our last visit was for a Restaurant Week lunch a few years back). Having never been for dinner before, I was quite taken aback by the prices - appetizers started at $30, their pastas ranged from $38 to $65, and their mains were $58 to $88.

Given the fairly scanty menu and the prices, everyone decided to just go with the degustation menu - still by no means cheap at $158, but it still seemed the most sensible. Service was a bit strange - they were very polite, but when we asked for bread, they said it was still being baked, and when the bread finally arrived it was lukewarm/room temperature?! 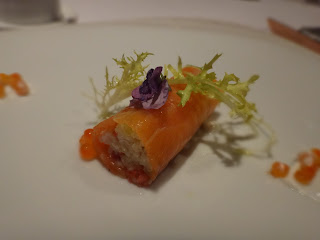 After a couple of amuse bouches to tide ourselves over - some kind of crab meat with tomato sauce, and a risotto ball with black truffle, the first course was a salmon roll filled with snow crab and caviar. 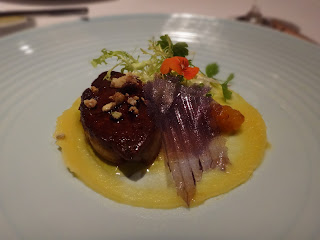 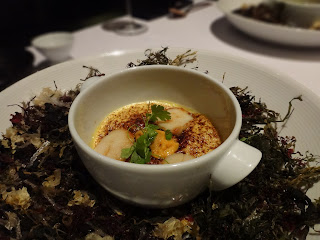 Next on the menu was the foie course. They kindly acceded to W and A's requests to switch the foie to something else, so they got an elaborate scallop dish that unfortunately looked better than it tasted. The scallops were overcooked and hence a bit rubbery. 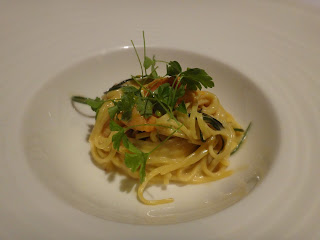 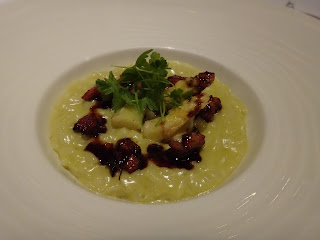 A had the spaghetti with uni that was on the menu, while I asked for them to prepare the risotto with frog's legs and asparagus instead. The latter was extremely disappointing - the risotto didn't have a very good texture or consistency, and the frog's legs turned out to be hard, dry cubes of meat that could have been any mystery meat. I tasted a bit of the uni spaghetti and that seemed to fare much better. 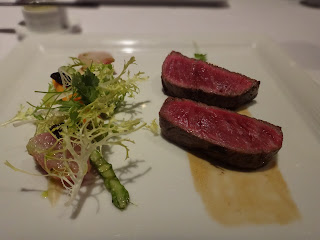 I must say that they executed the wagyu beef main course really well, though. Possibly simply due to the quality of the product, but the beef was insanely flavourful, and cooked really well too. 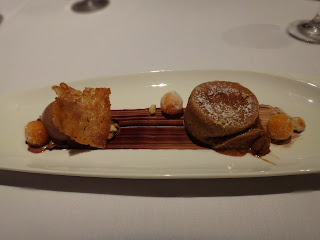 I think the meal was saved somewhat by the very tasty beef, but I don't think I'll travel all the way to Sentosa for this for no reason, especially given the prices.

Pretty good. Also pretty expensive. In terms of quality and price, it's somewhere in between Osia and Joel Robuchon's places at RWS. So maybe you could consider it if you're stuck in Sentosa and want a fancy meal.

I recently discovered to my absolute horror that Jewel Coffee in Shenton Way no longer serves their chicken wings with kicap manis dip! When I asked the owner the reason for this travesty, he claimed that besides me, not many other people ordered, let alone obsessed about, the wings. He said we could try the wings at the Jewel Cafe outlet at Rangoon instead. 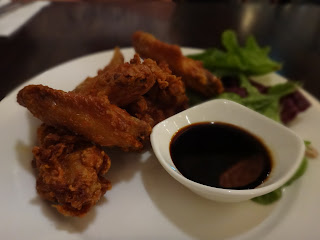 Alas, they're just not the same. The wings at Shenton were marinated in a gingery/Shaoshing wine marinade, and the best part, only the mid joints were used. At Rangoon, they're more typical deep fried wings - not bad, but not distinctive. Rangoon's default dip for their wings is a chicken rice chilli. I asked for kicap manis instead, but that too fell short of the one they used to serve at Shenton, which had chilli padi to liven things up. 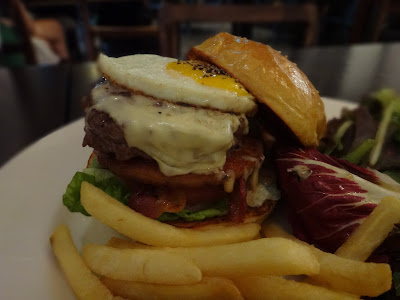 All is not lost though. The OMG burger at Rangoon is pretty damn good - beef patty with sunny side up egg, crispy bacon and a slice of luncheon meat. Sounds a bit overkill but it's a stellar combination. The patty was more medium than we would have preferred, but apparently we can specify medium rare when ordering.

I'm still pretty distraught that my favourite wings are no more, though. The quest
continues...

Er, this post is mostly C's chicken wing rant so I have nothing to add.