Ginza Plaza at West Coast has recently undergone a massive overhaul and rebranding exercise. It’s been spruced up quite nicely, and is now known by the more generic, but also less heartland-sounding, West Coast Plaza. There’s a rather strange selection of stores there now, with a seemingly disproportionate number of restaurants; one of which is New York New York, a branch of that pseudo-American diner with the perpetual massive queues at Citilink Mall.

The place has a fairly extensive menu, with a wide selection of burgers, sandwiches and standard main courses like ribs, roast chicken and fish and chips. We weren’t particularly hungry, so A had a burger, and I had a soup and a mushroom sandwich. 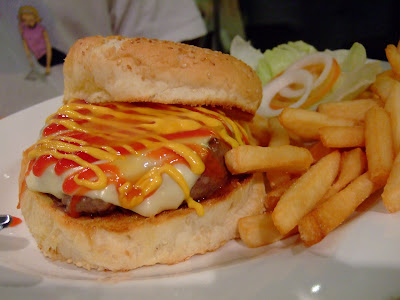 Their burgers are supposed to be one of their specialities, so I was actually quite underwhelmed by this. The patty was alright, and at least their medium rare was accurately done, but everything else was pretty ordinary. In contrast, because I didn’t expect anything out of my rather healthy mushroom foccacia sandwich, I was quite pleasantly surprised by this. It was still nothing spectacular – just sautéed button, shitake and enoki mushrooms, with tomatoes and cheese – but somehow the simple flavours went together very well. Still, having said that, the only reason I ordered this was because I wasn’t hungry. You can bet that on a proper atetoomuch day, I’ll be having something way more sinful. Something like the massive meat platter for two that we saw quite a number of couples sharing.

Well the food here isn’t mindblowing by any stretch; just basic, localised diner food. A repeat visit at some point is on the cards, but at the same time I’m certainly not clamouring to come back any time soon.

Incidentally, the guys behind New York New York are also the same ones behind Thai Express, Xin Wang Hong Kong Café and the Shokudo dining concept.

The service was good and prompt, especially considering how packed the place was. It’s lucky we got there early because the queue for a table was very long by the time we finished.

I really don’t see why people like it so much though. The food’s alright, but nothing fantastic. And the ventilation in this place is horrible. I felt like passing out.

Overall, I’d consider this as an option only if I’m in the area and there wasn’t a queue.

Those are useful tips, really informative. Thanks for sharing. Great post!