I’m pleased to report that after a slightly mixed reaction to the food and service at Friends at Jelita, our second visit tonight fared much better. A was having a mild pasta craving, and since Valentino’s was fully booked (what’s new?), we decided to satisfy his craving with the squid ink pappardelle at Friends.

The last time we were here, the food was good but inconsistent – the pasta was incredible, but the other main course and dessert were a letdown. What really put us off that time was the service, or rather, how long it took for us to get our food. With that experience in mind, and because we were starving, we made an early booking for 6.45 pm.

I think that’s probably the key to having a good experience at Friends. If you get there before 7.30 pm, service is good and your food arrives promptly. We had absolutely no problems this time; however, we overheard a few other tables, who arrived later when the restaurant was filling up more, having to chase the waiters for their starters. 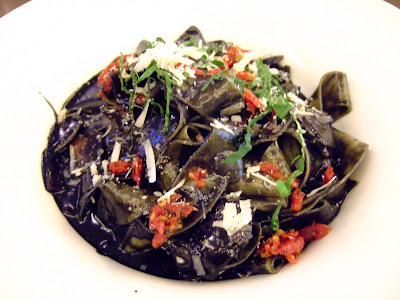 The squid ink pappardelle was as delicious as we remembered. They’ve since added ham to the ingredients, although you can barely taste it with the much stronger-tasting squid ink, sun dried tomato, parmesan and slivers of garlic. The slices of barely-cooked garlic really pack a punch, but don’t overpower the dish either. We’ll be hard pressed not to order this dish whenever we come here.

They also have something called Kami Sakura chicken on the menu. There are 4 different ways of preparing it, or you can order a sampler platter for two, that has tasting portions of all 4 dishes. What’s Kami Sakura chicken, you’re probably wondering? Well I was, anyway. Apparently it’s chicken that’s reared in a Japanese way, where the chickens are fed a special Yakult-esque feed that introduces good bacteria into their systems. As a result, growth hormones and other injections aren’t used. The chickens aren’t very big – about 1.5 to 1.8 kg, but their meat is especially tender. 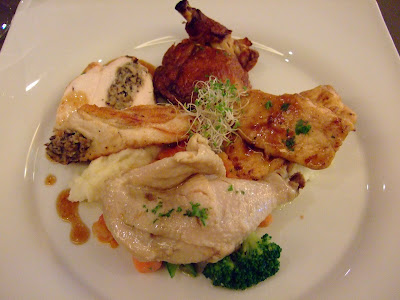 The 4 different dishes were, clockwise from top:

A and I had different favourites. My top choice was the scallopini, a typically Italian dish. The chicken pieces, although they were breast meat, were unbelievably tender. I’ve never had chicken breast that juicy and tender before, and the brown butter sauce ensured that it wasn’t too bland.

My second favourite was the roast chicken stuffed with ricotta mushrooms. The bits that had the mushroom stuffing were very good, but a few bites of just chicken breast alone were a little dull.

Next on my list was the wood smoked chicken. This was a chicken thigh/leg portion, smoked till the skin was nice and crispy and served with a ginger aioli. While the chicken was definitely flavourful thanks to the strong smoky flavour, I found it a tad overbearing. The aioli helped to cut through the flavour somewhat, though.

A and I were both least impressed with the chicken leg confit. Expecting it to be prepared duck confit style (slow-cooked in its own fat, then pan seared so that the skin is nice and crispy), this only reflected half of the traditional confit preparation – the oil/fat bit. The chicken was slow-cooked in olive oil, but that was it. It wasn’t finished in a pan or on the grill, so the result was a bit insipid. It tasted almost like steamed herbal chicken. 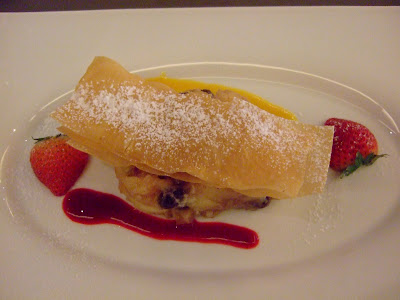 We shared the cinnamon banana with raisins and filo pastry for dessert, which was pretty average. Methinks that desserts aren’t exactly their forte here – the last time we had the lava cake was quite a disaster.

Still, I really like the squid ink pasta here, and there are a few other pasta dishes that I’m keen to try, like their home-made oxtail ravioli. Guess we’ll come back here whenever we can afford to have an early dinner, and want to go somewhere close to home.

They also do take-out, as well as catering and special requests. You have to give them a few days’ notice depending on the complexity of your catering or special requirements, but for take-out, you just need to call about half an hour before you plan to swing by to collect your food. Their menu can be viewed here.

Note: free private parking is available for restaurant patrons. Instead of parking at the usual Jelita carpark, turn right into the loading/unloading area, and inform the restaurant that you’ve parked there.

The waiters (and the owner) are always polite but I’d still advise going early if you want the food to come at a decent pace. Food-wise, I’m sticking with just my squid ink pasta. Sun-dried tomatoes rock!