A found out about Steeple’s Deli after reading about it on Travelling Hungryboy’s blog, but it turns out quite a number of people already know about it – my brother and Cousin C, for a start. But can you blame us for not knowing it existed? It’s tucked away on the 2nd floor of Tanglin Shopping Centre, amidst art galleries and tourist stores selling ethnic gifts, antiques and Chairman Mao paraphernalia. Apparently Steeple’s has been around since 1981, and is quite well-known amongst the well-heeled and the expats living in the area.

It’s a simple, cosy little deli, with an L-shaped counter where you sit facing their kitchen. The staff and cooks, all Chinese, are very friendly and helpful, telling us the daily specials even though they were already stated on the blackboard. The menu, all written on the board, consists of sandwiches, salads, omelettes, fish and chips and burgers. They’re also known for their milkshakes; A had the chocolate peanut butter one, which tasted like a molten Reese’s.

A had the Reuben, which is probably his favourite sandwich ever. This one had slices of pastrami and loads of sauerkraut on a rye bread and topped with melted cheese. 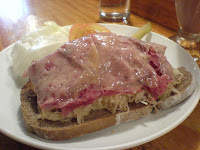 I’ll leave A to tell you how this compares to other Reubens, because the excessive sauerkraut wasn’t quite my thing. I had the teriyaki beef burger. It wasn’t quite what I expected – I expected a regular burger with teriyaki sauce, but instead, the teriyaki flavour had been marinated into the beef patty. The patty was very tender and quite juicy, though a little crumbly. It tasted fairly healthy too, because it wasn’t dripping with oil like most good burgers. The burger came with chips, which were particularly yummy after I’d drizzled some malt vinegar on them, and some pretty good coleslaw. 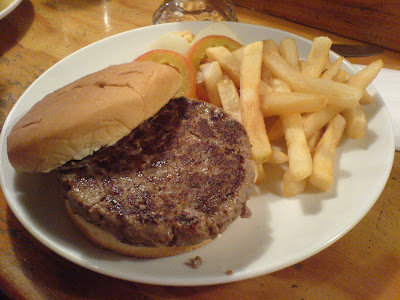 Cousin C says this place is known for their Fish and Chips, so maybe we’ll try that next time. They also supposed to do good brownies and fudge, but we were too full today. Again, maybe next time, because there most certainly will be a next time.

This place rocks for its ambience and excellent service. I’d definitely go very often if I lived in the area. But as a destination joint, maybe only once every few months.

The food is very good, but falls just short of great. I think the reason is the clean taste of the food. My palette has been spoilt by so much junk that unless my burgers and sandwiches are dripping in grease or condiments, I don’t really get a big hit (like a fatty heart attack).

The Reuben I had was generously topped with pastrami and sauerkraut but lacked a certain oomph! And I don’t think it was really worth the $12.90. The cheaper burgers and omelettes seem a better deal so I’ll go for one of those next time. That should give me room for a milkshake and a brownie with ice cream.

I've been going to Steeple's since 1991. Their food isn't THAT great, but their fudge!

As long as I'm in the vicinity, I'll drop by for a cup of tea/coffee and a block of fudge. Actually, it's more often two blocks. Or three. Heh.

Or if not hungry then, I'll bag some for later.

Argh, A's gonna kill me... He wanted to try a piece of fudge but I'd just exercised and was feeling guilty so convinced him to pass. Shoot. Never mind, now we'll definitely try it next time, thanks!