We had dinner here with C and A (that’s Cousin C) on Friday night. (Most of the photos in this post are courtesy of Cousin C.) We always try as far as possible to come to Manhill with a group of people, so that we get a chance to order more dishes. 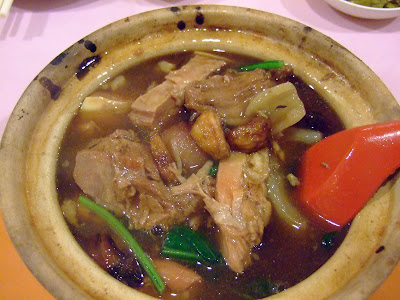 This place is famous for a number of dishes, two of which we had tonight. The claypot nao nam (braised beef brisket) was wonderful; I don’t usually get a chance to have this when A and I come here alone, because A will have just a few bites of this. The beef is slowly braised till tender and has absorbed all the flavours of the gravy, and the five-spice gravy is thick and almost sticky from the beef brisket and tendon. The gravy with the rice is heavenly; if weight weren’t an issue I could probably eat the whole portion on my own with copious amounts of rice. 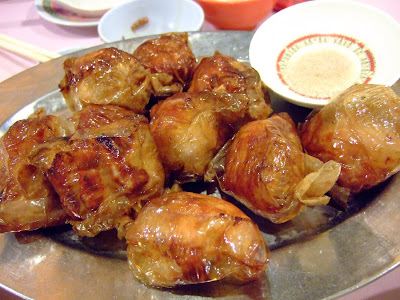 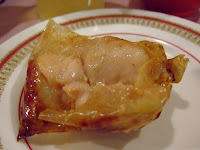 The other renowned dish is the paper wrapped chicken. The chicken is marinated with Chinese wine, and is still really tender and juicy – quite rare for this dish. They use chicken thigh pieces, boneless at that, which makes it way better than the paper wrapped chicken at Union Farm, in my opinion. Unlike at Union Farm, the chicken here isn’t dried out, there are no bones or odd pieces, and the paper comes off the chicken easily, with hardly any bits left stuck to the paper. 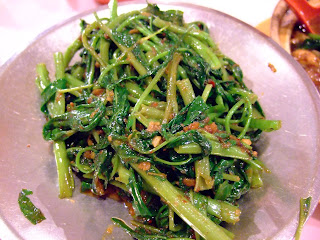 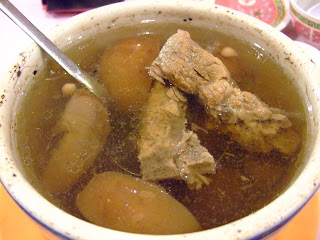 We had the sambal kangkong which was pretty good too, and we tried a new dish tonight, recommended by C and A – the steamed apple soup with pork ribs. This was quite interesting – it was a typical Cantonese-style double boiled soup, with the apple wedges boiled till they were really soft. I expected a fruity-tasting soup, but you hardly tasted the apple; it mainly added sweetness to the soup rather than any distinct apple flavour.

Again, I’ve forgotten how good the food is here. I realise it’s really close to work, so it’s actually quite convenient for us to pop by after work.

Note: Manhill’s sister restaurant, Hillman, used to be at Cantonment Road, but has since moved to Kitchener Road.

The chicken was much better than I remember. Very juicy. Service was pretty good since it wasn’t too crowded and there’s plenty of space to park in the public car park at the back. Actually I think this place would be best for small family dinners.