Bluespoon started out as a tiny little stall in the Holland Village Market, but its limited opening hours and unfortunate location meant that it wasn’t really able to reach out to its target clientele – busy yuppies looking for quick and easy frozen food for either weekday dinners or fuss-free parties. After a brief stint in the Market, it opened a café adjacent to Ghim Moh market, a fairly high class wet market that should hopefully lead to better foot traffic of its target clientele.

Bluespoon sells manageable portions of frozen gourmet food, everything from New England clam chowder and rack of lamb, mini éclairs and profiteroles, to local favourites like ayam buah keluak and satay. They even sell ready-made rempah for cooking the buah keluak, as well as the raw nuts and even just the flesh. Note: this is probably good for the younger generation looking to experiment with traditional food. I bought some of the buah keluak flesh for my grandmother, but she said that it was (a) expensive and (b) not as good as the ones that she could buy from either Ghim Moh market or Tekka market.

We popped by for a light dinner on Saturday night. A had the beef Shepherd’s Pie, and I had the Buah Keluak chicken. 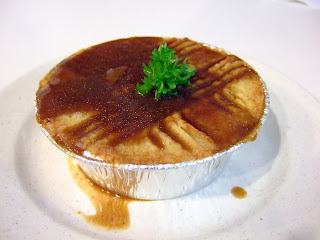 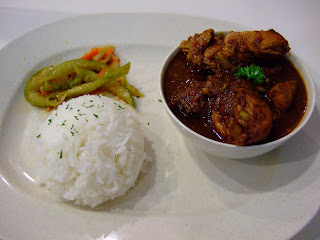 The pie far exceeded our expectations. First bite was pretty ordinary, but then it really grew on us. I guess it wasn’t spectacular because after all, it IS just a Shepherd’s Pie, but as far as Shepherd’s Pie goes, this was a good version.

The buah keluak fared less well, but perhaps I’m biased. The gravy was pretty thick, not thin and watery; it just tasted more like assam chicken than buah keluak – a trait that is all too common in restaurant-prepared buah keluak. I’m just too used to the one that my grandmother makes, and so far only Baba King has managed to come fairly close to hers.

I wouldn’t have the buah keluak again, but maybe if we happen to be in the vicinity, I might have the pie or some other snack like their waffles or pancakes. I wonder if they’re going to survive here, though. Business was pretty quiet on a Saturday night, and we didn’t see many people coming in to buy frozen stuff either. The location, while much better than the Holland Village market stall, still isn’t the greatest, since the Ghim Moh market food centre has so many famous local food stalls. Still, I guess once they make their presence known, people may start coming here to stock up on microwaveable meals for the week. They sure beat TV dinners, anyway.

I think the pies are great. They also have Milo Dinosaur which makes for a good drink-cum-dessert. I think next time I’ll try one of the roasted dishes which are supposed to be good. Other than that, I don’t see anything else as worth it. We went with my friends M & J, who had some chicken chop and Belgian waffles. M said the waffles sucked and J’s chicken (which was really a small breaded cutlet) didn’t look too appetising. It came with pretty decent fries though.