Again, another place that I’ve been to with friends, but never with A until Tuesday night. This was one of the first joints to open in the new Market Street Car Park, and after a slightly slow start, they’ve been doing pretty good lunchtime business ever since. Dinner’s a little quiet but it’s to be expected, I guess. It’s managed by The Asian Kitchen, who also runs Teahouse at Raffles City.

We ordered the Reunion Omelette (essentially a foo yong hai with prawns and lup cheong – Chinese sausage), the Moonlight Hor Fun and the Teahouse Crispy Duck (wonder of wonders, I do believe A is getting over his duck phobia).

When you order the Moonlight Hor Fun, the waiter will tell you, that it comes with raw egg, and whether that’s ok, or if you want the egg cooked instead. Each time I’ve been here before, I’ve been with someone who doesn’t do raw egg, so I’ve only ever had the cooked egg version. This time since it was just both of us, we decided to try the original version. I guess this doesn’t happen very often, because the waiter sounded quite incredulous, and asked us about 3 times to confirm that we wanted the raw egg. 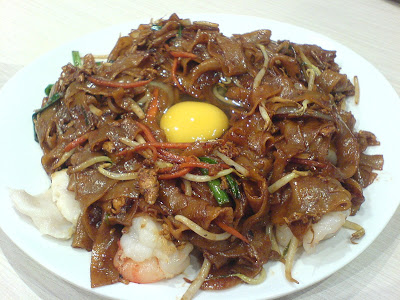 As you can see from the photo, the raw egg pretty much gives the dish its rather unique name. The egg yolk is, I guess, supposed to be a full moon amidst the dark ‘sky’ of hor fun. A bit corny but quite interesting, I must say. You’re meant to stir the raw egg into the hot hor fun, and after having tried both versions, the original raw egg one is much better – the raw egg makes the hor fun really moist and smooth. I swear that portions at dinner time are more generous than at lunch. They’re probably trying to get rid of stock at the end of the day. 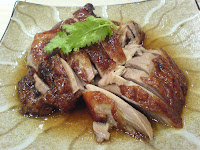 The duck wasn’t too bad either, but A said that it was too ‘ducky’ for him. I swear that if the same duck was served at either Café de Amigo or L’Angelus, he would have felt differently. Anyway, bottom line is, I probably wouldn’t specially travel just to eat here, but it’s a pretty convenient place for us since it’s right where we park the car.

The food is not bad. The service is very good. The prices are too high. I think it’s just a place to go if I want something quick, mid-ranged Chinese food on the way home.

Posted by atetoomuch at 9:12 PM