I think I officially consumed four times the number of calories I burned… We went to Adam Food Centre for dinner after our gym workout, and after salivating longingly at bowls of King George’s curry chicken being doled out, I decided to order that instead of my usual healthy and much lower in calories fish soup. 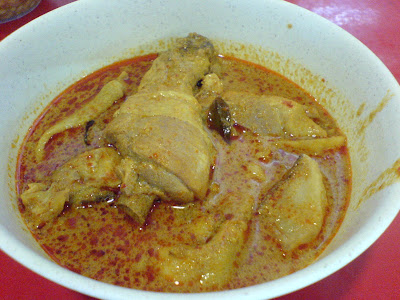 The good thing was that the chicken was all drumstick and thigh portions, and the gravy was the Chinese/Hainanese style curry, i.e. flavourful but quite thin and drinkable (not like thick Indian curry gravies). Unfortunately, that was all that was positive. The chicken was quite tough and chewy; I’m not sure whether it was the quality of the chicken, or whether it was overcooked. Maybe a combination of both. And the gravy, while of a good consistency, was a tad too sweet and I tasted some dominant tomato sauce flavours which I didn’t like very much.

I don’t regret trying it (though the number of calories is another story…), because at least now I won’t be hankering for it every time we go to Adam. Looks like unless we have any other cravings, we’ll stick to the sliced fish soup and fried rice at King George from now on.

The curry was nothing special. Best dish there is still the regular fried rice (not the beef one). At least the dessert stall was open so I did get to have my tau suan fix. RAWK!
Posted by atetoomuch at 9:55 PM