Next on our weekday value set lunch trail is modern French restaurant Gunther’s at Purvis Street. Their set lunch is the magic number $38 for 3 courses. We were there just after 1 on a Friday and it was surprisingly crowded. 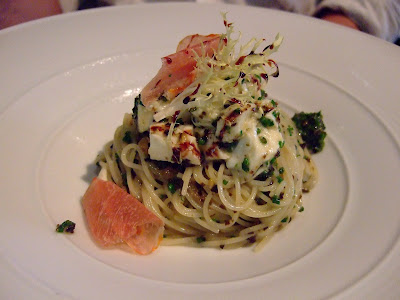 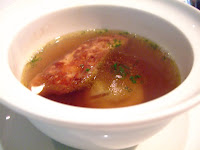 A had the cold pasta with shaved Iberico ham, and I had the mushroom consommé with foie gras ravioli and a slice of seared foie gras. A’s pasta was ok – slight Asian in flavour and the ham had a nice nutty flavour without being too salty. My consommé was much better. It was clear yet bursting with flavour, and the foie gras was a good textural contrast to the clear consommé. 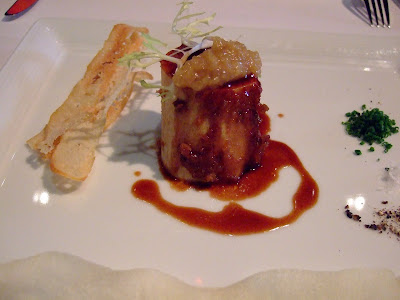 We were a bit indulgent – I saw the Roasted Bone Marrow on Toast on the a la carte menu and had to order it. I love bone marrow in any shape or form, and this dish showcased it at its best. You’re given a tiny spoon to dig out the bone marrow, spread it on the wafer-thin toast and season to your liking with sea salt, pepper and chives. The marrow was rich, creamy and insanely flavourful. This is a heart attack waiting to happen so it’s definitely a once-in-a-LONG-while treat. 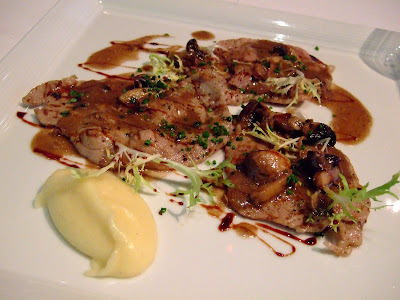 There were 3 options for the main course. We nixed the garden pasta, so it was just down to the meat and the fish. The fish was grilled tuna, and the meat was called Gunther’s Creation on the menu. It was meant to be roast chicken but they’d run out, so they served roast Kurobuta pork shoulder instead, and man I’m glad they ran out of the chicken. The pork was fabulous – thinly sliced and grilled, the smoky flavour was quite apparent and the pork, being streaked with fat, was very flavourful. 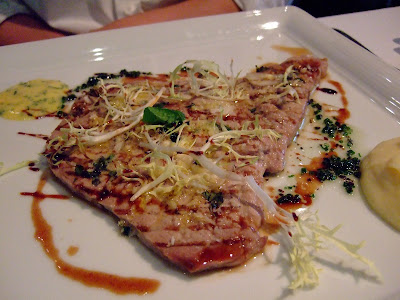 The fish (which was plated very similarly to the pork, and indeed many of the other dishes that we noticed being served) was quite an enigma. It didn’t taste like fish at all. If you’d given it to me in a blind taste test, I might have said it was very tender chicken breast. The pork was better overall, but the tuna was good because it was such a novel flavour.

Dessert was a rather uninspired crème caramel, but generally no complaints about the food. Service was good but I felt that the main waiter was being just a tad patronising. Maybe it was just his manner – for the most part he was very polite, but I sensed some very subtle hints of condescension, especially when I was raving about the bone marrow and the consommé. This echoes another anecdote that I heard about the place, where the maitre d’ almost fell over trying to wrest a McDonald’s paper bag from S when she walked in carrying one.

I actually found the service to be excellent and not as snooty as I thought it would be. The food was excellent. It didn’t blow me away but it was very interesting. I’d definitely be willing to go back sometime.

Heh I think I know who this main waiter is.. I'd probably kena his attitude twice, once at Garibaldi (before Gunther started his own restaurant), and another time when I was at Gunther's.