After our thwarted attempt a few Saturdays ago, I came here for lunch on Tuesday with Y and S. We got here at 12.15 and queued for a good 25 minutes but it was worth it. 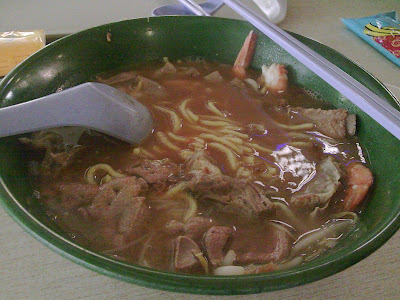 The photo totally doesn’t do it justice (it was a rainy day and lighting was bad). It was the best bowl of prawn noodles I’ve had in years, specially since Wah Kee stopped serving liver with their noodles.

You can order all sorts of permutations involving prawns, pork ribs, small intestines and liver. Naturally I had a $5 bowl with the works, and man, was it satisfying. The soup stock was thick, rich and flavourful, the pork ribs super tender, and the liver was fresh and runny. With optional chilli padi and lard, this really is the perfect bowl of prawn noodles for me.

Since I came here on a work day at lunchtime, A wasn’t with me but anyway prawn noodles are really not his thing. So S and Y will take his place in a special guest post :)

Seeing the line that had formed in front of the stall even at 12.15, I had high expectations. The soup did not disappoint. It was thick as C said and really rich even though it did not have that red colour I like. I am not a fan of exotic ingredients so I had the $4 bowl with just prawns and pork ribs (no organs, thank you). This was fantastic and made for a very satisfying lunch.

I must admit that the greedy part of me was a little upset at first as the $5 bowls with the liver and stomach (or whatever else exotic parts of the pig C and Y were having) came in a huge basin whereas the $4 bowl was tiny in comparison. After standing in line (albeit gossiping) for 25 mins (felt like 40 mins), I felt I should have done myself justice with a basin of that soup. However the $4 bowl was more than sufficient. If you are a guy with a large appetite, make sure you go for the $5 bowl.

Glad I found another fun place to eat at lunchtime. Thanks C and Y for taking me there!

I’m just so relieved that S and C liked the food because it is not often that I recommend eating places (especially to foodies like C and S) AND on top of that, make my 2 atas friends take the public bus (first time in YEARS for S) there with me as well!

I had the soup version the last time I came here with a colleague. While we were queuing up (it was definitely more than 25 mins lah), we spotted some people having the dry version, which was topped with a generous dose of tomato ketchup. That made me feel nostalgic so I decided to try the dry version this time. It was good, but slightly disappointing because I think there was too little ketchup but more chilli in the sauce, so it was more spicy than ketchupy. What’s good when you order the dry version though, is that the uncle gives you a big bowl of “pure” soup to go with it – shiok!

I ordered the $5 bowl because I wanted the liver and according to the Chinese signs in front of the stall which showed the various permutations you can order, you only get liver if you order the $5 bowl ($4 = prawn + pork rib + intestines, $5 = prawn + pork rib + intestines + liver). It was huge and I had to struggle to finish all of it (C seemed to have no problem with hers though heheh) [C says: Oi!]. Next time I shall try to see if the Uncle will entertain an order of a $4 bowl with the intestines (not stomach lah, S!) being swapped for liver instead.

What the frig... PSA Terminal?! Got all excited at first cos I thought it was in Amoy St :(