We headed back to Casa Verde today for a stab at their pizza and, after reading rave reviews from both W and S, their mee goreng. Surprisingly, the mee goreng wowed us more than the pizza. 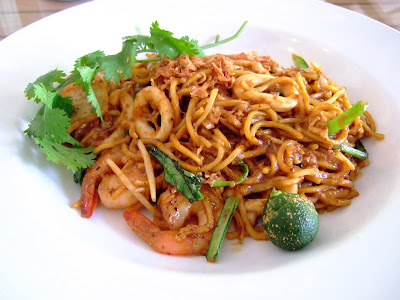 While I don’t regularly partake in Indian-style mee goreng, I do know a good one when I taste it, and this is one of the best ones I’ve had. It’s moist and full of flavour, yet doesn’t feel excessively oily or heavy. They’re quite generous with the ingredients too – lots of plump fresh prawns, squid rings and fish cake. 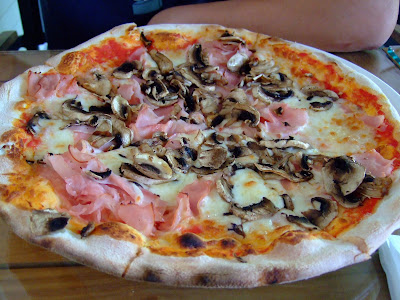 We ordered a very standard proscuitto e funghi (ham and mushroom) pizza, but were a little disappointed that it was actually shaved honey-baked ham rather than true proscuitto (parma ham). This was perfectly decent but it didn’t wow us. I felt that it was a bit too simple and clean-tasting, and could have benefited from a tad more tomato paste and/or cheese.

We sat at a table that was right next to the pizza oven, and had a bird’s eye view of Chef Lucio preparing the pizzas. The seafood one really caught our eye, as it was loaded with ingredients, and the four cheese, with its bubbling golden brown medley of cheeses, got me salivating. We definitely plan to try one or both of them some time soon.

Update: We have since ordered the seafood pizza for takeaway, and it was seriously very good. They’re really generous with the ingredients – chunks of salmon, squid rings and fresh prawns – and to compensate for the lack of cheese, there’s a slightly garlicky cream sauce that complements the seafood perfectly. Even my dad enjoyed this, and he doesn’t even like pizza.

The proscuitto e funghi wasn’t very impressive. Since trying the very excellent seafood one though, I’m eager to try the four cheese.

Dear C,
Just to clarify, that there is no such thing as true prosciutto. In fact, proscuitto is the Italian word for "Ham". So, prosciutto cotto is cooked ham, whilst prosciutto crudo is cured ham. Prosciutto di Parma is Parma ham, and Prosciutto San Danielle is from Friuli-Venezia Giulia. The default ham used for Pizze Prosciutto e Funghi is Prosciutto cotto. Please start educating your tastebuds before you comment in a food blog.