This is about as old school as it gets. Shashlik, inconspicuously tucked away on the 6th floor of Far East Shopping Centre, has been around forever and from the looks of it, so have their décor and their staff. And I don’t mean that in a bad way either. With ever more chi-chi restaurants popping up every other month, it’s comforting to know that a place with just good food and no other gimmicks can still survive for over 20 years.

Stepping into the restaurant feels almost like going back in time. The décor is largely unchanged, and harks back to the days of early 80s fine dining, with dim lighting and dark wood panelling. Even the waitstaff, in their burgundy vests and bow ties, are old school and, more often than not, just plain old. Don’t expect stellar service though; they’re efficient but generally quite stone-faced and brusque. In fact, they recently turned away a diner who only wanted to order the Baked Alaska dessert, insisting that he had to order a main course as well. 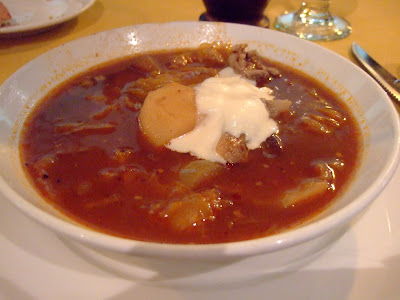 Still, notwithstanding the obvious faults, you can pretty much count on having a good meal here. There are lots of interesting old fashioned starters on the menu, like hard boiled eggs and caviar, baked oysters and blinis, but we almost always order the Borscht, which is a traditional Russian soup with beef, cabbage, beetroot (to give its distinctive red colour) and a dollop of sour cream. Portions are definitely inconsistent – your dining partner could have 6 chunks of beef to your 2, but at $7 it’s still a very good bowl of soup.

There’s quite an array of steaks here, being their specialty. There’s the Chateaubriand, which is a long fillet of beef meant to serve two, and individual portions of fillet steaks with different preparations. I had the Steak a la Russe, which is fillet steak with a mushroom sauce. I asked for the sauce on the side, as usual, which was a good thing because I preferred eating them separately. While both are meant to be the fillet cut, I found the Chateaubriand to be slightly sweeter and the meat more fine and tender. Prices are quite decent – where can you find beef fillet (tenderloin) for $25 these days (not counting places like Jack’s Place)? Even the Chateaubriand, at $50 for 2 portions, is still $25 per person. 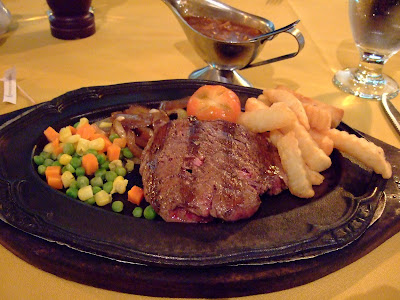 The steaks are served on hot plates here, so if like me you’re a slow eater, you may want to order one level down from your usual to take into account the extra cooking time on the hot plate. My rare fillet seemed a bit underdone at first cut, but sure enough it cooked a little more on the plate and turned out perfect. 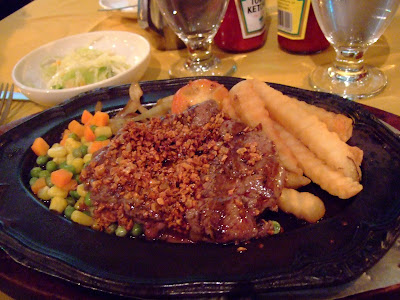 A had the garlic steak, which used to be my default choice here. Not any more though – tonight it was topped with a mountain of chopped garlic, which all but masked any flavour of the steak. I think the next time we come we’ll just order the Chateaubriand.

Gordon Ramsay, in his Kitchen Nightmares show, would have a field day critiquing everything that’s wrong with this place – the décor, the service, the menu and the serving styles that are stuck in the 80s. But the marked difference between the restaurants featured on the show and Shashlik is that against the odds, it’s still going strong, with new generations of loyal customers discovering the quaint appeal of this dining institution.

The borscht rocks. I’m not too hot on steaks on hot plates anymore though. And while my garlic steak sucked (way too many garlic chips), everyone else’s was excellent. This place has always been a favourite with my family so I’m sure we’ll keep coming back.