This is a branch of the joint on Mohamed Sultan Road. They opened their Bukit Timah branch at Crown Centre (next to Renaldo’s) a few months ago, but somehow they don’t seem to be doing as brisk a business as I expected. They ought to be able to tap the well-heeled Bukit Timah set who doesn’t want to brave the crowds and parking situation at Mohamed Sultan, but on Friday night it was ¼ full at best. 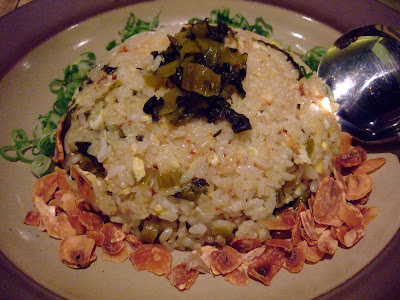 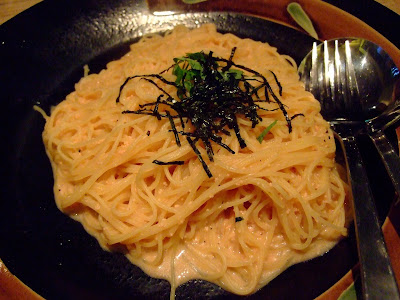 We ordered a few old favourites from the other branch, like the Wafu Spaghetti (cod roe sauce) and the Garlic Fried Rice, both of which were as good as I remember. The crispy garlic slices in the rice were really fragrant, and while the wafu spaghetti was more subtle in comparison, I still really like the flavour. 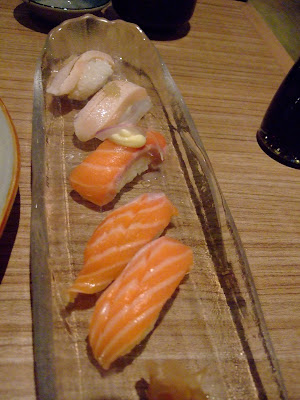 We ordered some aburi sushi, to compare it to the one at Sushi Tei.We had the aburi swordfish and salmon belly – while the fish was very good and very fresh, it was barely seared so it didn’t have that nice smoky flavour that the Sushi Tei one has. 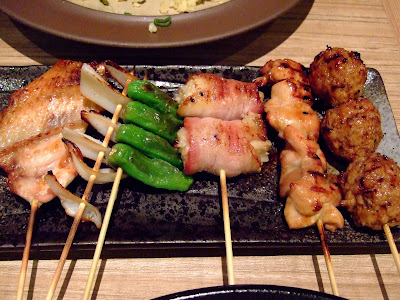 We also tried their mixed yakitori platter, which consists of tsukune (chicken meat balls), teriyaki chicken, enoki mushroom wrapped with bacon, chilli peppers, chicken soft bone (the centre bit in between the breasts – not cleavage, har har) and chicken wing. The soft bone was a disaster – it wasn’t well grilled, and was hard, crunchy and tastless. I only managed to eat 2 small pieces. The rest of the skewers weren’t bad but not as good as those from a specialty yakitori place like Kazu. 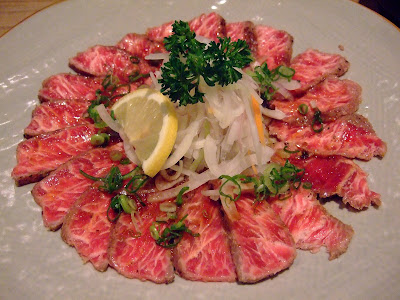 The best item here, and what we’ll be returning for again and again, is the beef carpaccio. Unlike the carpaccios served in Western/Italian joints, the meat here isn’t wafer thin. I find that a good thing, since you’re supposed to be able to actually taste the meat in a good carpaccio. The meat here was cut to about 3 mm in thickness, slightly seared, and incredibly tender and flavourful thanks to the marbling. It was drizzled with a tart ponzu sauce, and was one of the best carpaccios I’ve ever had. At $15 for that large plate, I think it’s pretty good value too.

A perfect light meal here would be the carpaccio, garlic rice and wafu spaghetti. In fact, we might come back next week for more.

Awesome carpaccio! And not horribly expensive too. I’ll definitely be back for this and the garlic rice. And we probably should go soon. Considering the place was only half full on a Fri night, it may soon be hit by the A&C curse.