If you were wondering why we were more quiet than usual around late April/early May, it's because we were on vacation. We spent a week each in Las Vegas and New York - taking giant leaps, renewing old promises, and basically just eating our way through both cities.

Las Vegas certainly has no shortage of good food. Almost every "celebrity" chef worth his/her salt has set up an outpost here, and given the city's reputation as a laid-back party town, it's somewhat less intimidating to dine at even the fancy restaurants here. Almost everyone's a tourist, and there are no "locals" who sniff at you disdainfully for intruding on their turf.

Since our last visit here, the CityCenter complex, including the Cosmopolitan and Aria resort casinos, has sprouted up, bringing with it a plethora of new, and in some cases pretty damn good, dining options. In fact, some of our best meals in Vegas were at these joints.

There are 2 JP Patisseries in Vegas - the flagship store with the huge chocolate fountain is at the Bellagio, and a more understated second one at the Aria. The latter was a godsend for us. Our hotel room wasn't inclusive of breakfast, so it was extremely convenient to pop downstairs for coffee and a croissant to start the day. 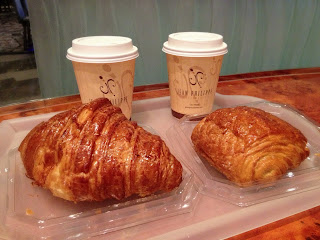 The espresso-based coffees were good; the cafe au lait was decidedly not. But the croissants were legendary. Light as air, fragrant with butter and with a crisp glazed crust, they really put the Tiong Bahru Bakery ones to shame.

Given our love for tapas-like small bites, it's no wonder that we fell in love with Julian Serrano's eponymous restaurant, also located in the Aria (his other more fine-dining restaurant, Picasso, is at the Bellagio). Offering updated takes on traditional tapas, as well as modern creations, some of our best bites were here. In fact, we liked it so much we came here twice.

Some outstanding dishes were:

- A's favourite, a lobster gazpacho that was refreshingly cold, tart and had a generous helping of tender lobster meat 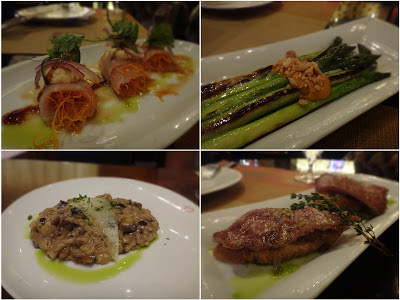 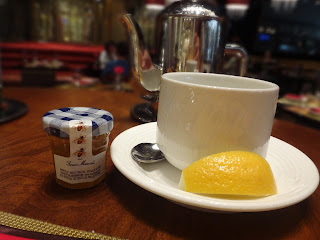 Also, out of the many places where I asked for hot water during our trip, this is the only place that served it with lemon and a tiny jar of honey. Love it.

Given that dining at the original Masa in New York is way out of our budget, we figured his more casual BarMASA, again at the Aria, was a more affordable way for us to sample his creations. 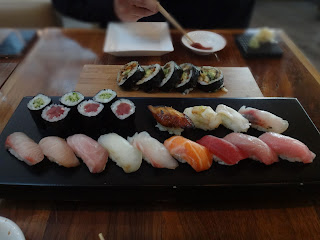 We shared a sushi platter, as well as some less traditional dishes that the restaurant is apparently known for. For the most part, the sushi was very good, athough A found the salmon nigiri very lacklustre. The otoro sushi was a bite of absolute heaven - I dare say even better than the ones we had in the restaurants around Tsukiji. Also, the wasabi here is mellow and fragrant rather than up-your-noise spicy - apparently a proprietary blend of Chef Masa's, including fresh wasabi and miso.

We had a really good kanpachi jalapeno with fried potato julienne, with the jalapeno adding just a hint of heat to keep things interesting. We also had another ceviche - with amaebi and scallops - that really brought out of the sweetness of both the shrimp and the scallops.

Jose Andres' restaurants all but dominate the Cosmopolitan. We went to China Poblano, a quirky joint that serves both Chinese and Mexican food. Highlights at China Poblano were definitely their tacos. If tacos in Singapore were remotely like these, rather than the Tex-Mex versions that are prevalent here, I'm pretty sure I'll have a different view of Mexican food.

The corn tortillas were really cute and small - only about 5 inches in diameter, and were filled with interesting yet perfectly balanced ingredients. Think duck tongues with lychee, and beef tongue with salsa. By far the best though, was the Viva China taco -sliced beef tendons topped with a kumamoto oyster. Surf and turf at its best. 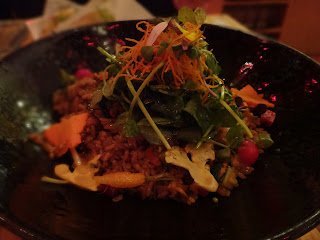 At the recommendation of our waiter, we also tried their signature dish, the Twenty-Vegetable Fried Rice. This was a lot better than expected, with the various different vegetables adding a myriad of tastes and textures to perfectly seasoned and very well-cooked rice.

We belatedly discovered Jaleo, his more traditional Spanish restaurant, only on the day we left, so we didn't get a chance to visit. Next time!

We're a big fan of Hubert Keller, both from his stint on Top Chef Masters and our visit to Burger Bar on our last trip, so when we found out that he'd opened a small plates concept called Fleur in Mandalay Bay, it was definitely on our to-go list.

Unfortunately, in comparison to the other awesome things we had at Julian Serrano, BarMASA and even China Poblano, Fleur fell somewhat short. Everything was ok, but nothing was memorable. In fact, I'm already struggling to remember what we had. The only thing that stood out was the chocolate souffle dessert, which was wonderfully done but perhaps drowned in a bit too much cherry sauce. 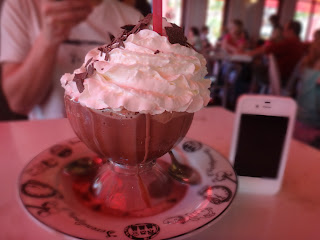 Of course, we had to do our pilgrimmage to Serendipity 3 at Caesar's Palace. Their Frrrozen Hot Chocolate did not disappoint - rich, creamy, chocolately and with no traces of icy bits.

For me, no trip to the US is complete without at least one perfunctory food court Chinese meal. I actually had a few, and the one at China Pantry at the Premium Outlets North food court came out tops. I had the beef with broccoli and chicken with mushroom, and both were tender, tasty and the vegetables were still crisp and crunchy.

Also, my tips to ensuring that these are edible and remotely healthy are: (a) steer clear of any deep fried/neon-coloured meats; and (b) always ask for white rice instead of the default options of fried rice or chow mein. If you don't see it, ask for it. They'll always have a steamer of white rice on standby.

If you like modern tapas, I highly recommend Julian Serrano.
If you want something more casual, though not necessarily cheap, China Poblano has interesting Mexican/Chinese dishes.
If you can afford it and like japanese, try Bar Masa.
And if you're hungry and like chocolate, go for the gigantic sandwiches and frozen hot chocolate at Serendipity.

Posted by atetoomuch at 8:41 PM