Sorry for the silence. Atetoomuch has been away in Japan for the past few weeks and didn’t get a chance to update everyone beforehand. We’re still working on our travel post but that could take a while, so in the meantime we’ll continue with our regular posts till we get our act together.

The day after we returned, we finally made it to Spruce for lunch. We’ve heard good things about them, but they’re always fully booked when we try to make a last minute reservation on weekends. We were here on a Monday afternoon so plenty of tables available.

When I saw the menu online, the one thing I wanted to try was their burrata cheese starter, served with momotoro tomatoes, basil and extra virgin olive oil. We even confirmed when we called for a reservation that the dish was available at lunchtime. It’s quite a large portion so we ordered that to share, as well as a Spruce burger and a side of mashed potatoes. 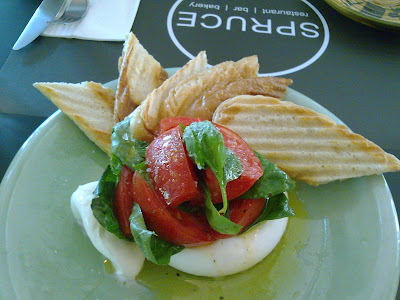 Overall the burrata dish was very good – the combination of creamy cheese, well-seasoned tomatoes, basil and olive oil is a classic, but if I were to nitpick, I’d say that the burrata cheese itself didn’t have as much flavour as the one at Valentino. Still, this definitely satisfied my long suppressed burrata craving. 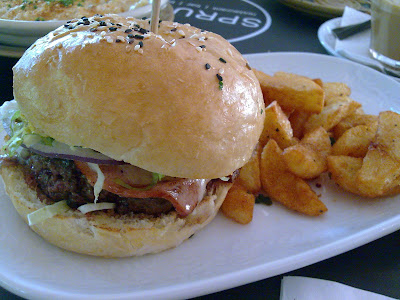 We ordered the original Spruce burger to share, which comes with Havarti cheese and a pickle relish. We had it medium rare (of course) and added the bacon option, which resulted in an absolutely fabulous burger. A close second to the one at Morton’s, and much cheaper at $17 ($19 with the bacon). The patty was roughly chopped and loosely formed, so still juicy and had some texture, but what really (and surprisingly) made it all come together was the pickle relish. Rather than being overwhelming, it actually enhanced the flavour of the burger by adding a hint of acidity to cut through the richness. Next time we’re having one each – this is too good to share!

They serve a “Robuchon-style” mashed potato. We ordered it as a side to share, and only after it arrived did I remember reading about the hallmark of Joel Robuchon’s pomme puree – a ratio of equal parts of potato and butter... Eep! And this is after our holiday pigout to boot! Never mind... the gymming starts now. 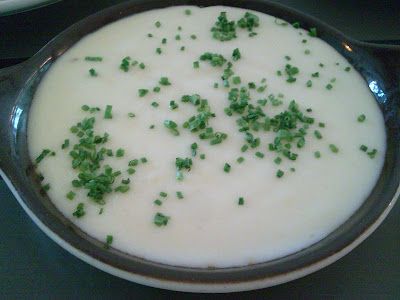 These were buttery but not super smooth; obviously I haven’t tried Robuchon’s so I don’t know what the benchmark is. They were alright, but I don’t think these were worth the calories.

All in all, a very enjoyable first experience at Spruce, and one that definitely left us wanting more.

I can’t believe it took us so long to come here. Awesome burger. Much better than Relish and Handburger. Service is great too. Top marks and a definite contender for best finds of 2010.

there's an extra dish in the picture of the burger. why no mention?

You mean behind the burger? That's the mashed potato.

going to eat too much said...

glad you guys are back!

My company is planning to hold a food sampling session for food bloggers and I would like to extend my invitation to you. If you are interested, do drop me an email at jane.ong@neogroup.com.sg. thank you!