This place bills itself as serving “Japanese style Taiwanese cuisine”. A bit of an identity crisis, you might think, but I think the Japanese part is just a marketing ploy to target the clientele in the Robertson Quay area, because the food seems quite decidedly Taiwanese. We came with A’s friends so we managed to try quite a number of dishes. 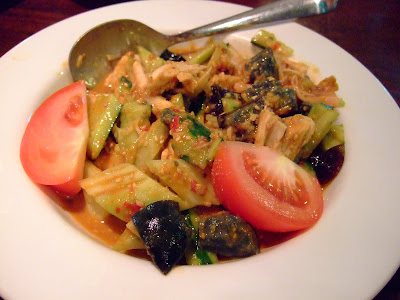 I ordered a dish that was described as spicy chicken with century egg, but the literal Chinese translation was “Weird Taste Chicken”. I should’ve known better. Well, to be fair it was perfectly edible, and A and P seemed to like it even, but it had a predominantly sesame/peanut flavour which just isn’t my thing. 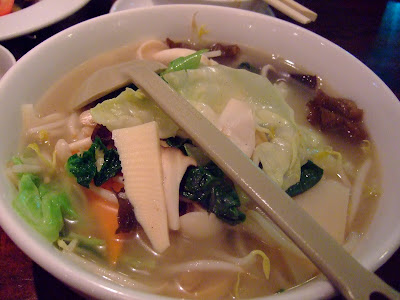 I would strongly recommend sharing their noodle dishes, because their portions are massive. The zha jiang mian that some of the others ordered was very tasty, but it came on such a huge plate that 2 people could easily share. And the mixed vegetable and mushroom noodle soup that I had was chockfull of vegetables, very light yet tasty, and just what I needed after a weekend of binging. They have sample portions of their Taiwanese soup noodle and their braised pork rice, for $4 each, which make for a good alternative if you want to try more dishes. Unfortunately the yummy zha jiang mian doesn’t seem to come in mini portions. 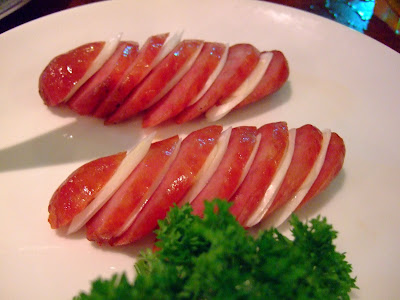 We picked at some of the dishes that the rest ordered. The Taiwan sausage is notable because of the presentation – from afar it almost looks like a Caprese salad, but taste wise I thought the sausages were a bit too lean. The stir fried beef with eggplant had rather overcooked and tough beef, but absolutely delicious eggplant. And the mixed vegetable and mushroom noodle soup that I had was chockfull of vegetables, very light yet tasty, and just what I needed after a weekend of binging.

None of us had any expectations, so the general consensus was that the food was actually pretty good. I know this isn’t quite A’s thing, but I really like the food here, so we better come more often while we're still in the area, because A certainly won’t agree to this as a destination place.

It’s not bad but I certainly wasn’t blown away. If C wants to go, I wouldn’t say no. But if she asks for suggestions, I wouldn’t bring it up.

if you're gonna try everything a r. quay (an excellent place for food), you've gotta try menya shinchan. the ramen place around the back of sangokushi

the kuromayu miso/burnt sesame oil miso ramen (order it katame/firm) + add char siew is the best ramen in singapore in my books. will cost under 20 bucks too. even after adding extra meat and stuff.

Hey, thanks for the recommendation! I've been wondering about this ramen joint actually. Was wandering around that back alley to see what's there, and noticed the thai place and the ramen place. Ramen place looked authentic, but was also quite deserted, so didn't know if it was good.

Cool, we'll definitely give it a try!

saw this place, after eating at the ramen place... it was so full.
The ramen place is okay... affordable
mike
gourmandtales.wordpress.com