Next on our Robertson Quay list, Mondo Mio is a few doors down from Shunjuu and bills itself as a South Italian restaurant. We didn’t make a reservation on Friday night, and just about managed to get a small table outdoors. 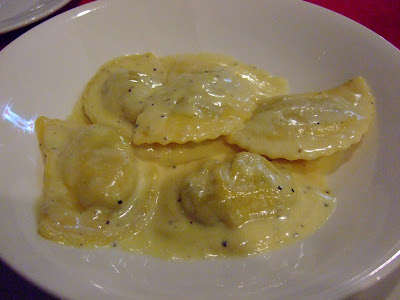 In addition to a pretty comprehensive menu, they also had some specials written on a chalkboard. We decided to share the ravioli stuffed with porcini in a truffle cream sauce as a starter. This set our hopes pretty high for the meal – the ravioli wasn’t too thick or chewy, the filling was generous and the cream sauce was good, albeit lacking in much truffle flavour. 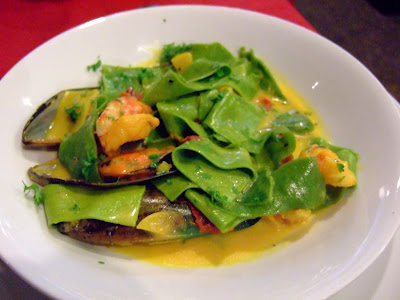 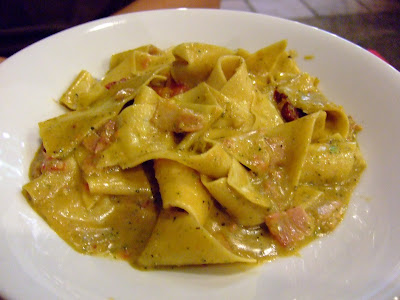 On hindsight, it probably wasn’t a good idea for both of us to order pappardelle. The pasta, which was apparently home-made, wasn’t rolled out very thin so it didn’t have the smooth silkiness of the home-made stracci at Pasta Brava. Also, I think they rushed a bit in the cooking, because while some pieces were properly cooked, some had stuck together so they were tough and chewy, taking al dente to a whole new level.

Flavour-wise, A preferred the seafood one, while I thought the bacon one was better. The colour of the bacon one wasn’t very appetising though, and the combination of pesto with tomato cream sauce was a bit out of sync.

Prices seemed quite cheap, with the premium pastas going for just $22, but portions are on the small side – definitely meant for a first course rather than a proper main. Service wasn’t too bad, but with Bella Pizza round the corner, I’d hesitate about coming back.

The service here is superb. The head waiter is very friendly and attentive without going overboard into irritating territory.

The ravioli we tried was very good but the other two dishes were average. And really, don’t bother with the desserts here.

Overall, I’ll probably come back for some simple pseudo-Italian since I’m living in the area (C says: Temporarily! Don’t get too comfy, dude...). But it’s definitely not a destination point.