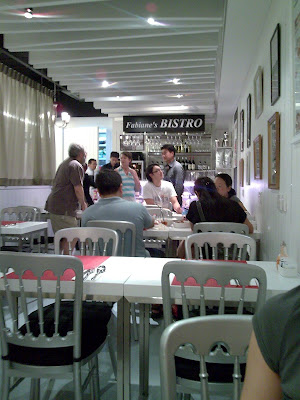 You can imagine our surprise when, barely a month after our first visit to the Espirito Santo cafe, our second visit presented a completely different facade and dining concept. Previously, a couple of long wooden tables and benches were laid out within the floor area of the butchery, and menus were laminated A4-sized cards; now, a gauze curtain separates “Fabianne’s Bistro” from the rest of the store, individual tables are set with table linen and proper cutlery, and the menu is also a posher black leather (or PVC) bound affair featuring all of the items on the previous menu and then some, like foie gras, pastas and a whole selection of Brazilian specialities.

Luckily (or unluckily) for us, they had just completed their conversion and today (Saturday 19th January) was their launch of the new bistro. Luckily because we came here wanting to try it again; unluckily because, as with all new establishments, teething problems abounded. 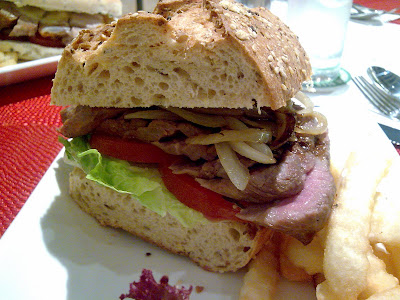 I ordered the Espirito Santo Jumbo Burger; what arrived was the sandwich in the picture above. I was rather puzzled, so I asked the server if this was the burger and she said yes. Fine, so I assumed that this was their bistro interpretation of the humble burger. The meat was alright, medium rare and pretty sweet, but the bread was cold, hard and dry. When I was almost done with the burger, along came a server bearing a proper Jumbo Burger, asking who’d ordered it. Great, so what I’d just wasted my stomach on was their flank steak sandwich, not the jumbo burger. I was too full to accept the burger, but informed them of their mistake anyway, to profuse apologies. On hindsight, I should’ve just accepted the burger, had a perfunctory bite, then doggy bagged the rest of it. Drat. As it is, I paid for, and ate, something that I didn't order and didn't want. Hmph. 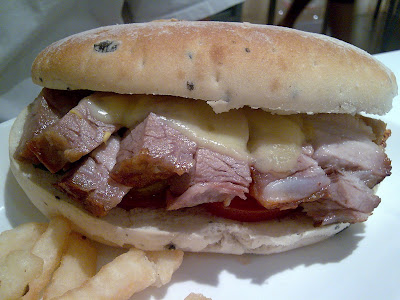 A’s roast pork sandwich fared much better. Slices of moist, juicy pork belly were sandwiched with cheese and pickles in a soft olive foccacia (Or ciabatta? Panini? One of them, anyway). After trying this and the pork belly the last time, compared to the rather lackluster flank steak in my ‘burger’, I think their forte here is pork (the meat of kings).

A Japanese couple behind us had loads of problems just getting their bill/credit card chit, and another guy next to us was served something that he didn't order. I wonder how much wastage they had to face that day due to staff incompetencies. Well, thanks to their much expanded menu, I’d like to go back and try even more things, like their seared cod fillet with fettucine, and some of the Brazilian dishes like feijoada and moqueca. Need to give them a while to get their act together though. I don't want to order a moqueca and end up with risotto instead.

The service staff were ultra-polite, but also ultra-incompetent. Hopefully, they’ll get better with practice. It’s a shame really, because the food is pretty good.