Will wonders never cease? A actually agreed to have Thai food again today! When he was working in the Beach Road area, he tried this place a couple of times, and decided to bring me here to try it.

The restaurant is actually a branch of the Tuk Tuk Thai family, with other outlets at Suntec and Amoy Street, to name a few. It’s located in Golden Mile Complex, the infamous Thai hangout along Beach Road.

There were loads of things on the menu that I wanted to try, but we ended up having a Tom Yam soup (for me), and a rice with basil chicken (for A). The basil chicken was very good – very fragrant and tasty, and surprisingly packed quite a punch from the bits of chilli padi that were thrown into the mix. 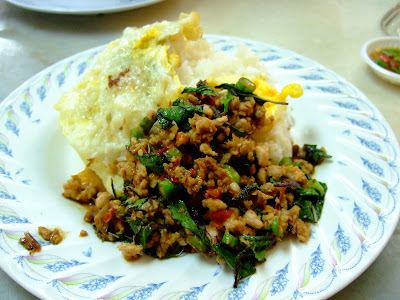 My Tom Yam was really good – the stock was really rich, so the tom yam soup wasn’t just clear orange but slightly murky. It was packed with lemongrass, galangal slices and kaffir lime leaves, adding to the very heady and authentic flavour. The seafood was passable – the squid pieces were a little on the chewy side, but it was still very shiok (note: later in the afternoon I certainly paid the price for slurping up all of the fiery broth). 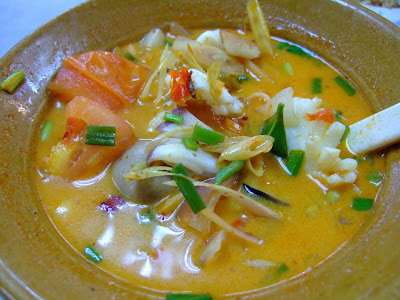 They do a good iced tea and lemongrass juice here too. Next time we’re here, I want to try the green curry and pineapple rice. Oh, and if you’re into ‘street food’, they operate a stall opposite the restaurant selling all manner of things on sticks – whole catfish, chicken legs, livers and other strange things. Very interesting indeed. 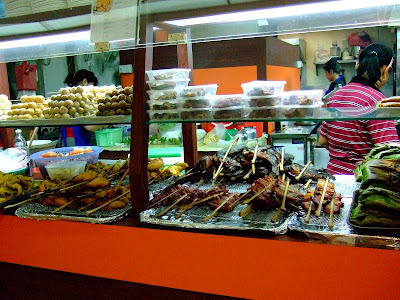 Considering I don’t like “exotic” food, I could actually eat almost everything here (I still won’t touch anything with Tom Yam in the name though). Prices are also very reasonable considering you get pretty big portions for the more expensive dishes.