A number of people have raved about the British authenticity of Smiths Fish and Chips, but we were loath to travel all the way to Tanjong Katong Road and hunt for parking, just for fish and chips.

So we were extremely pleased to find out that they recently opened an outlet at Balmoral Plaza. Apparently, so were many others, because the place was packed when we ventured there fairly early on a Saturday evening. We were a bit concerned that we’d either have to stand up and eat, or brave the haze outdoors, but the turnover is pretty quick and by the time the queue moved we managed to snag a table.

It definitely brings to mind an old school English fish and chip shop, just a lot brighter and cleaner. You queue up to place your order, and the portions are served in a completely no-frills manner, wrapped in plain waxed paper. There’s quite a comprehensive menu, from cod to haddock to dory to halibut, as well as sausages, chicken and salmon fishcakes. There’s even baked beans and mushy peas for the sentimental expat longing for a taste of home. 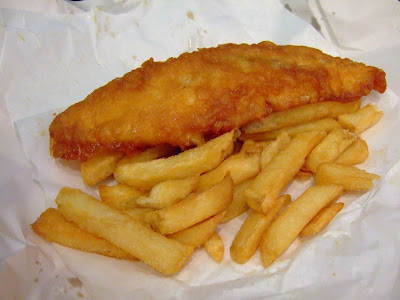 We ordered the cod and the haddock. At $18 and $17 respectively, prices are not exactly cheap. The cod was better than the haddock, in my opinion. The flesh was flakier, more moist and more flavourful. The chips were quite a let down. I know British chips are traditionally thick cut, not the shoestring fries that we’re used to, but a good chip can still be crisp outside and fluffy inside. These were just fried chunks of potato. Needed lots of ketchup, but hey, at least they use Heinz.

All in all, it was a bit underwhelming, and not really worth the price, in my opinion. The fish and chips at Two Fat Men are way better value, and assuming Greenwood Fish Bistro still has their promo of $10 for takeaway fish and chips, I’d much rather have any of those instead.

The atmosphere’s a bit crowded and chaotic. And the fish & chips we had, even at the $17/18 price range was above average at best. The batter was awesome though. And if I wasn’t concerned about having a heart attack, I’d just order multiple portions of the batter scratchings for $1 each. But overall, there’s nothing here that leaves me with an overwhelming urge to come back.

they are having a branch at Boat Quay soon!

I went to the Katong Branch about a week ago with a friend... definately not coming back as the quality is nothing to shout about...

It is however quite authentic if you had eaten at one of those very bad fish and chip stores in the UK...

I agree with Anonymous...Been a few times giving them a chance but "no" not anymore...its only because one of my friends used to work there !! sorry friend...10 $ down the road is batter value..