Knowing our love of rustic, unpretentious Italian fare, W recommended Bruno’s to us, and also knowing our aversion to driving and especially parking in the East, she and M volunteered to do the driving. We made a reservation on Monday for a 2nd (8 pm) seating on Saturday, so tables aren’t all that hard to come by.

Bruno is apparently a French guy, who decided to open an Italian restaurant because Italian food is more accessible in Singapore. Though not immediately noticeable, the menu does have a few sparks of French amongst the Italian dishes, like escargots and a mousse au chocolat. 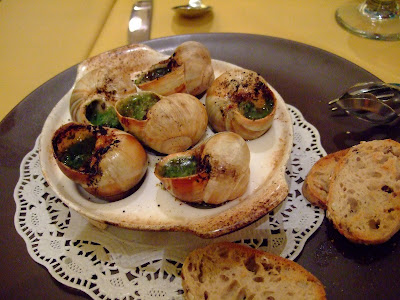 We ordered the escargots, which came drenched in a very yummy herb butter. Some of the snails weren’t very meaty and were quite elusive when we were trying to dig them out of their shells, but they were very tasty.

Like most Italian restaurants worth their salt these days, Bruno’s has daily specials, and I like that they’re written on chalk boards, rather than depending on waiters to explain them, and risking not getting the full picture from a less competent waiter. 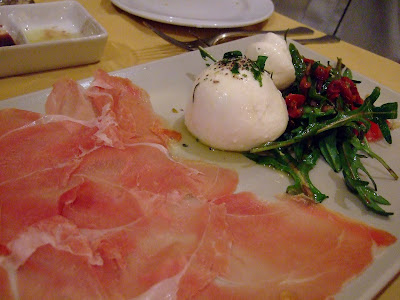 One of the specials was the burratine cheese, which was pretty much a burrata-esque cheese, served with arugula salad and slices of parma ham. The cheese was very good when combined with the parma ham, but lacked a bit of flavour on its own. The arugula was dressed with a nice sun-dried tomato and olive oil dressing, which was pretty good. 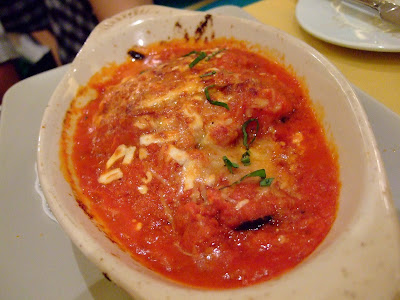 At M’s request, we ordered the eggplant parmigiana, which tasted a whole lot better than it looked. The slices of eggplant were really soft, and had absorbed all the flavours of the tomato sauce and cheese. 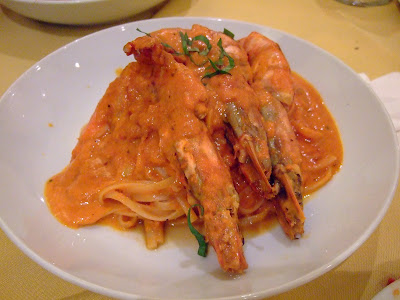 Since W has been here a number of times, she recommended the king prawn linguine with a tomato, cream and lobster sauce, supposedly their best pasta dish and one of their signatures. At $24.50 for 3 huge king prawns and a mound of pasta, this was amazing and fantastic value. The prawns had the most amazing head juice, the pasta was cooked perfectly, and the sauce was rich with the flavour of the prawns. While Valentino’s lobster pasta with pink sauce may be just a bit more richer in flavour, it’s also $43, and in my opinion, it may be almost twice the price but it’s not twice as good. 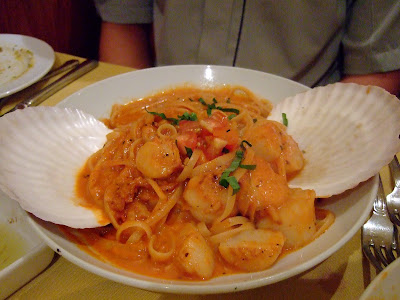 A ordered a very similar linguine – with scallops in a tomato cream sauce. Because this didn’t have the prawn/lobster element, the sauce was slightly thinner and more watery, and thus less flavourful too. They were very generous with the scallops though, so again very good value at $24.50. 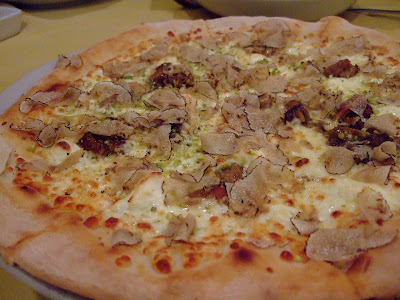 We splurged a little and ordered the special pizza, which had black truffles and porcini mushrooms. Instead of a black truffle salsa which most places use, they used proper shaved black truffles here and the aroma was intoxicating. The pizza itself was pretty good, but I think I would have preferred if the crust was slightly more burnt and crispy. 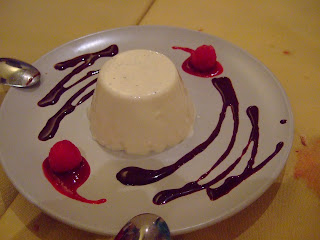 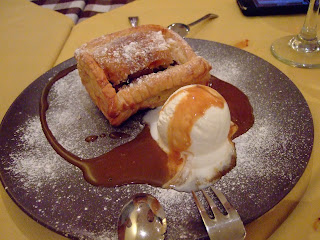 They had unfortunately run out of the mousse au chocolat by then, so we ordered a panna cotta and the warm apple pie for dessert. The panna cotta was quite ordinary – creamy but I think slightly lacking in vanilla flavour.

We ordered the apple pie because it had a salt caramel sauce. It took quite a while, though the waiter did try to warn us. It was a puff pastry pie with a cinnamon and apple filling, a scoop of vanilla ice cream and caramel. The caramel was more of a burnt caramel than a salt caramel; not bad but I think I’ll try some of their other desserts next time.

I’m definitely very keen to come back, for the prawn pasta again but also to try some of the other very enticing-sounding items. Parking is still an issue, so maybe we’ll see if W and M want some company the next time they come here...

Food-wise, it’s not quite as good as Valentino’s, but noticeably more affordable, at least when it comes to the seafood pastas. I’d say 80% as good and 60% the price. Do the math if you think it’s worth it.

Our friends also warned us that the service here is VERY slow but we didn’t encounter the problem on this visit. The large 12-person group at the next table did have a major issue as they were told they could not have dessert as another party was waiting for their table. They complained that they only took so long because the first order took over half an hour to come out. Since we got there only as they were being kicked out, we can’t verify if this was true. I guess that means you should book a late second seating if you want to enjoy a long meal.

Overall, I think it’s worth going for the quality of the food for the price. Just expect a long wait and hard-to-find parking spaces.

You got our company for Bruno's anytime! ;p W&M