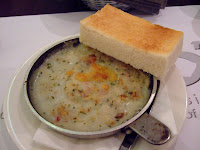 We went back to Tao’s again on Friday night; it’s been more than six months since our last trip here and they’ve made some changes to the menu so we were able to try a few new items.

As always we started with the bacon and cheese gratin, which was delicious but very hot; first mouthful burned the roof of my mouth. 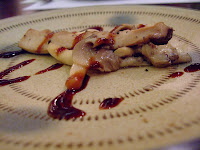 The salad was different this time – we had ‘Farm Boy Splendour’, which was grilled chicken with mixed salad and tossed with a vinaigrette dressing and topped with peanuts. The vinaigrette was very tart, just about on the verge of being unbearably so, but it did whet our appetite for the rest of the courses to follow. The grilled mushroom was next, and again we didn’t vary from our tried and tested mushroom soup.

We did get adventurous for the mains, though. There were 2 fish choices – a grilled snapper with Japanese sauce, and a baked Atlantic flounder with cheese. I decided on the snapper because it sounded less heavy, and I was very pleased with it. The fish was done perfectly – just the right flakiness and not overcooked – and the Japanese sauce turned out to be something like teriyaki sauce laced with balsamic vinegar to give it some edge. 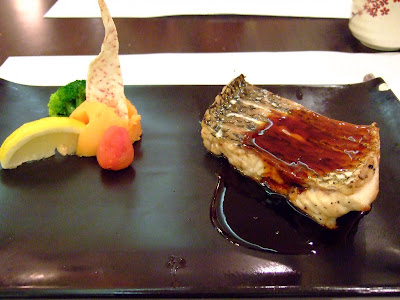 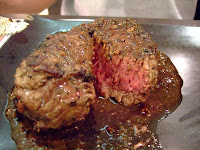 A usually orders the lamb cutlet, but today he decided to go with the slow-roasted steak. The sauce was a little too laden with black pepper for his liking, but the steak was done to a perfect medium rare – not an easy feat given its thickness. I was really impressed that a joint like this could get it so right in terms of steak doneness.
Again, I had the crème brulee for dessert (see if you can spot A in the photo), and the grape mallow tea, and A had the green tea ice cream and summer peach tea. 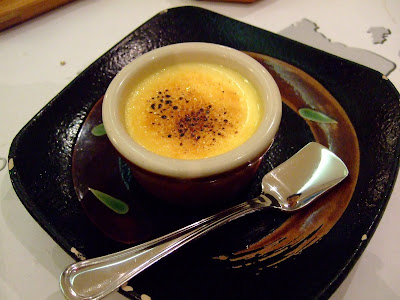 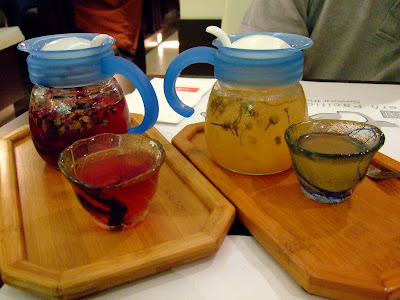 The staff are clearly quite happy where they are, because some of the guys have been there since we first started going in 2003. They’re really polite without being overly effusive in a TGI Fridays way. Once again, an enormously satisfying meal here.

Great food, excellent service and very reasonable prices considering the variety. I can’t believe that it’s been so long since we’ve been back. Paradiz has also mostly cleaned up (i.e. not the sleazy place from way back) and the parking also really cheap (which explains why the car park is usually full after 9). The confusing thing is, that while it reads your IU when you enter, you stilll have to insert the cash card into the machine when you exit. What's up with that?