Some of you may remember that we were unceremoniously turned away when we tried to have lunch at Au Petit Salut the day we left for our trip. Undeterred, we called the day we landed for a lunch reservation the next day, and were (grudgingly) given an outdoor table, with strict instructions that they “hold the reservation for only 15 minutes”.

The set lunch is very good value at $22+++; you can get an Executive set lunch for $38+++, but the choice isn’t as varied. For the regular set lunch, there are about 5 or 6 choices each for starter, main and dessert.

I had the pork rillette to start off, and A had the escargots with garlic butter. The rillette was pretty much like a pate, quite fatty but very good when eaten with some baguette.

I decided on the Pan-seared ‘Onglet’ beef with confit shallots and French fries. This was pretty much a seared steak, and done to a perfect medium rare, as requested. The fries were light and crisp, and the shallots were tasty, if a bit overpowering. 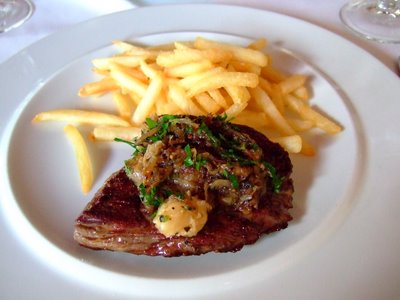 A had a grilled tuna which was slightly disappointing, in the sense that even though we were asked if we wanted the tuna done rare and we said yes, it still arrived almost cooked through except a tiny pink centre. It was quite tasty with the tomato-based sauce, though, but it would’ve been so much better if it had been less cooked. 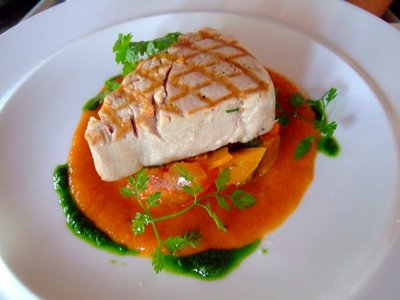 I had a chestnut mousse cake for dessert and A had a very gelak crème brulee.

Overall, and pending being able to get reservations of course, I wouldn’t mind coming back here for a very good value lunch. Iggy’s is still tops, but that’s an unfair comparison really, since Iggy’s lunch costs twice as much.

Good enough food though I expected better from the place’s reputation. Service was surprisingly friendly since I had expected them to be snooty. Biggest surprise was how packed it was with Japanese tai-tais. The place was crawling with them. Overall, I think it’s not bad, but I won’t be top of my list of places to go for lunch. Note to self: cappuccino better than latte.