Quick one on Choupinette, since we’ve written about it before. We had Sunday brunch there and it was absolutely packed, but the head waiter was very nice and took my name down, and told the other waitresses that once a table freed up, they were to clear it immediately and not give it to anybody. We barely waited 2 minutes before we managed to get a table.

I had the Eggs Benedict, and A had the Eggs Royal – the only difference between the two being mine had ham, and his had smoked salmon. Each serving had 2 eggs, each one looking like this: 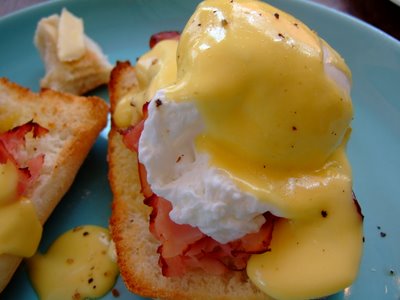 We also ordered a small loaf of their Fougasse bread, to mop up the remaining hollandaise sauce and egg yolk. The bread is one of the best I’ve had – it’s light and airy, and absolutely delicious with just a dab of salted butter.

Some people have complained that this place is too poncy and expatriate, but I beg to differ. Service has always been good and no one has treated me any differently than they treat the many ang mohs that frequent the place.

Once again, for the most part, we were the only locals there. Like C said, the service and the food were still great though, which is probably why it’s so packed. And they’re nice to everyone, even the local middle-aged couple that C kept complaining about (mainly how they had no taste and weren’t poncy like her).

The woman used five packs of sugar in her latte!! FIVE!! A and I only used half a pack each! And when her breakfast of sausages and eggs arrived with a nice crusty bread roll (bearing in mind this is a bakery/patisserie known for their breads and pastries), she seemed offended and actually demanded, in a rather affected manner, “I don’t want any of this fancy bread. Don’t you have normal slices of white bread?”

Good grief, woman. If all you wanted was sunny side up eggs, sausages and toasted Sunshine white bread, go to Denny’s…

You use sugar in your latte?!! *gasp*

but seriously, I don't.