The gang had a belated birthday celebration for me on Saturday. During the planning stages, we were at quite a loss for a suitable place, since we’re now a group of 10 plus 4 kids. I suggested Shin Yuu, an a la carte Japanese buffet restaurant at Greenwood, based on a couple of recommendations. They have a private room, and we thought that would be good for us to make as much noise as we wanted. As it turns out, when W called to book, they told her our group was too big for the private room so they seated us in the main restaurant.

The buffet here is definitely good value - $35++ per adult for dinner. The items on the menu all sound pretty good, but when they eventually arrived, it became evident that it’s quantity over quality. 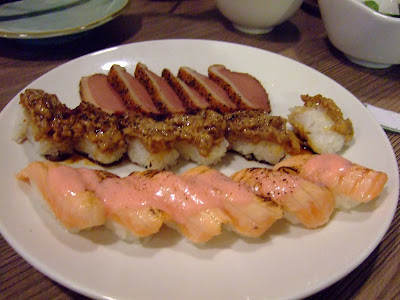 Their handrolls were very disappointing. The nori tasted and felt soggy, as though it had been left in the open for ages, and the rice was pretty mushy as well. Their aburi salmon sushi was pretty tasteless too, and nowhere near the standard of the one at Z’En. They had an aburi cheese roll which again sounded good on the menu, but in reality was very disappointing. The cheese was more like a creamy cheese sauce, unceremoniously dolloped on top of maki rolls and torched. 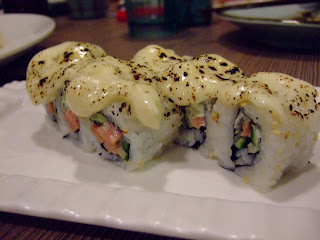 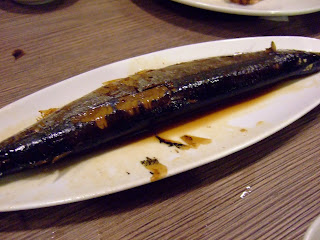 There were a few good items, like the beef short ribs and most of the chef’s specials. The chef’s specials are not on the menu, and only one order of each is given per table. There was a braised oxtail that wasn’t too bad, and the tuna belly nigiri sushi was quite good too. Some specials fell flat, like the grilled sanma fish that was all bone and overcooked, and the grilled fish cheek that had a distinctly watery texture and not much flavour.

What I didn’t like was that although they had desserts, they weren’t on the buffet menu and you have to pay separately. Again, a contrast with Z’En where the buffet includes ice cream, creme brulee and cheesecake.

The service is a bit of an oddity. The owner Gary is quite a character, and on hindsight I don’t think he meant to be rude; it was just his mannerism but before we realised that, he did rub some of us the wrong way. He came out all flustered, and told us to cancel our entire order of handrolls because we’d ordered too much. While I appreciate that we shouldn’t waste food, the way he conveyed it did put a dampener on our spirits, and we kinda lost our momentum after that point.

Overall, it may have been cheap but after a while we just stopped ordering/eating because the food just wasn’t very tasty. In the end I don’t even think that we each ate our money’s worth. This is a far cry from the a la carte buffets at either Z’En or En Dining. In conclusion, I would gladly pay the $15 or so difference, for markedly better quality.

Update: I just found out that the dinner buffet is $48, not $35 as I initially thought. That makes it the same price as Z'En, in which case it's not even value for money any more. For the same price I would pick Z'en in a heartbeat.

The good reviews got me hyped, and thus, disappointed. It’s… okay…


Your post is very nice and helpful. Thanks for sharing here!
Want to enjoy the best food, then choose Sajway as it is the Best Buffet Restaurant in Abu Dhabi (أفضل مطعم بوفيه في أبو ظبي).